A ruminant is a mammal of the order Artiodactyla that digests plant-based food by initially softening it within the animal's first compartment of the stomach, principally through bacterial actions, then regurgitating the semi-digested mass, now known as cud, and chewing it again. The process of rechewing the cud to further break down plant matter and stimulate digestion is called "ruminating". There are about 150 species of ruminants which include both domestic and wild species. Ruminating mammals include cattle, goats, sheep, giraffes, bison, moose, elk, yaks, water buffalo, deer, camels, alpacas, llamas, antelope, pronghorn, and nilgai. Taxonomically, the suborder Ruminantia includes all those species except the camels, llamas, and alpacas, which are Tylopoda. Therefore, the term 'ruminant' is not synonymous with Ruminantia. The word "ruminant" comes from the Latin ruminare, which means "to chew over again". 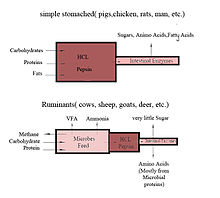 Food digestion in the simple mammalian stomach animals versus ruminants[1]

The primary difference between a ruminant and non-ruminant (called monogastrics, such as humans, dogs, and pigs) is that ruminants have a four-compartment stomach. The four parts of the stomach are rumen, reticulum, omasum, and abomasum. In the first two chambers, the rumen and the reticulum, the food is mixed with saliva and separates into layers of solid and liquid material. Solids clump together to form the cud or bolus. The cud is then regurgitated, chewed slowly to completely mix it with saliva and to break down the particle size. Fiber, especially cellulose and hemi-cellulose, is primarily broken down into the three volatile fatty acids, acetic acid, propanoic acid and beta-hydroxybutyric acid, in these chambers by microbes (bacteria, archaea, protozoa, and fungi). Protein and non-structural carbohydrate (pectin, sugars, starches) are also fermented.

Even though the rumen and reticulum have different names they represent the same functional space as digesta can move back and forth between them. Together these chambers are called the reticulorumen. The degraded digesta, which is now in the lower liquid part of the reticulorumen, then passes into the next chamber, the omasum, where water and many of the inorganic mineral elements are absorbed into the blood stream. After this the digesta is moved to the true stomach, the abomasum. The abomasum is the direct equivalent of the monogastric stomach (for example that of the human or pig), and digesta is digested here in much the same way. Digesta is finally moved into the small intestine, where the digestion and absorption of nutrients occurs. Microbes produced in the reticulorumen are also digested in the small intestine. Fermentation continues in the large intestine in the same way as in the reticulorumen.

Almost all the glucose produced by the breaking down of cellulose and hemi-cellulose is used by microbes in the rumen, and as such ruminants usually absorb little glucose from the small intestine. Rather, ruminants' requirement for glucose (for brain function and lactation if appropriate) is made by the liver from propionate, one of the volatile fatty acids made in the rumen.[citation needed]

Hofmann and Stewart divided ruminants into three major categories based on their feed type and feeding habits: concentrate selectors; intermediate types; and grass/roughage eaters, with the assumption that feeding habits in ruminants cause morphological differences in their digestive systems, including salivary glands, rumen size, and rumen papillae.[5][6] There are also pseudo-ruminants having three-compartment stomach instead of four like ruminants. Guinea pigs, horses and rabbits are not ruminants as they have an enlarged cecum allowing the easy digestion of fibrous materials. Such animals are called hind-gut fermenters.

Wild ruminants number at least 75 million and are native to all continents except Australia and Antarctica. Nearly 90% of all species are found in Eurasia and Africa alone. Species inhabit a wide range of climates (from tropic to arctic) and habitats (from open plains to forests).[7]

Ruminating animals have various physiological features which enable them to survive in nature. One feature of ruminants is their continuously growing teeth. During grazing, the silica content in forage causes abrasion of teeth. Abrasion of the teeth is compensated by continuous tooth growth throughout the ruminant's life, as opposed to humans or other non-ruminants whose teeth stop growing after a particular age. Ruminants do not have upper incisors,[9] instead they have a thick dental pad to thoroughly bite food.

Vertebrates lack the ability to hydrolyse beta [1-4] glycosidic bond of plant cellulose due to the lack of an enzyme celulase. Thus ruminants must completely depend upon the microbial flora, present in rumen or hindgut, so as to digest cellulose. Digestion of food in rumen is primarily carried out by the rumen microflora which contain dense populations of several species of bacteria, protozoa, sometimes yeasts and fungi. It is estimated that 1mm of rumen contains 10-50 billion bacteria, 1 million protozoa and several yeasts, fungi.[10] As the environment inside a rumen is anaerobic, most of these microbial species are obligate or facultative anaerobes which can decompose complex plant material such as cellulose, hemicellulose, starch, proteins. Hydrolysis of cellulose results in sugars which are further fermentated to acetate, lactate, propionate, butyrate, carbon dioxide and methane.

Tannins are phenolic compounds that are commonly found in plants. These compounds play a role in protection from predation, as well as growth regulation, when they are digested by herbivores. Found in the leaf, bud, seed, root, and stem tissues, tannins are widely distributed in many different species of plants. Tannins are separated into two classes: hydrolysable tannins and condensed tannins. Depending on their concentration and nature either class can have adverse or beneficial effects. When ruminants digest some plants, they acquire a surplus of tannins and rumen microbes do not have the enzymatic ability for degrading condensed tannins. In fact, digestion of tannins by ruminants in large amounts can reduce the activity and the proliferation of ruminal microorganisms reducing ruminal biohydrogenation.[13] Tannins can also precipitate proteins and inhibit the absorption of nutrients.[14] Very high levels of tannin intake can produce toxicity that can even cause death. Animals normally consuming tannin-rich plants can develop defensive mechanisms against tannins, such as the strategic deployment of lipids and extracellular polysaccharides that have a high affinity to binding to tannins.[15] These mechanisms prevent tannins from causing adverse effects on rumen microbes.

In Abrahamic religions, a distinction between clean and unclean animals approximately falls according to whether the animal ruminates. The Law of Moses in the Bible allowed only the eating of animals that had cloven hooves and "that chew the cud",[16] a stipulation preserved to this day in the Jewish laws of Kashrut.

The verb to ruminate has been extended metaphorically to mean to ponder thoughtfully or to meditate on some topic. Similarly, ideas may be chewed on or digested. Chew the (one's) cud is to reflect or meditate. In psychology, "rumination" refers to a pattern of thinking, and is unrelated to digestive physiology. 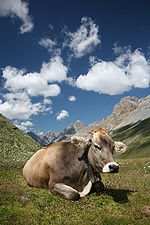 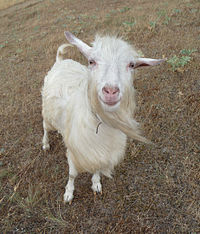