The esophagus (or oesophagus) is an organ in vertebrates which consists of a muscular tube through which food passes from the pharynx to the stomach. During swallowing, food passes from the mouth through the pharynx into the esophagus and travels via peristalsis to the stomach. The word esophagus is derived from the Latin œsophagus, which derives from the Greek word oisophagos , lit. "entrance for eating." In humans the esophagus is continuous with the laryngeal part of the pharynx at the level of the C6 vertebra. The esophagus passes through posterior mediastinum in thorax and enters abdomen through a hole in the diaphragm at the level of the tenth thoracic vertebrae (T10). It is usually about 25–30 cm long depending on individual height. It is divided into cervical, thoracic and abdominal parts. Due to the inferior pharyngeal constrictor muscle, the entry to the esophagus opens only when swallowing or vomiting. 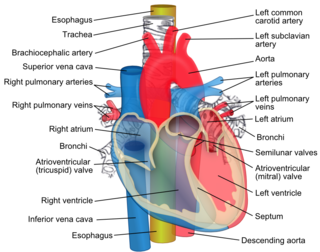 Course of the esophagus (anterior view), showing it passing posteriorly to the trachea and the heart.

The layers of the esophagus are as follows:[2]

Normally, the esophagus has three anatomic constrictions at the following levels;[3][4]

The distances from the incisor teeth are important as is useful for diagnostic endoscopic procedures.

The junction between the esophagus and the stomach (the gastroesophageal junction or GE junction) is not actually considered a valve, although it is sometimes called the cardiac sphincter, cardia or cardias, it actually better resembles a structure.

In much of the gastrointestinal tract, smooth muscles contract in sequence to produce a peristaltic wave which forces a ball of food (called a bolus) while in the esophagus. In humans, peristalsis is found in the contraction of smooth muscles to propel contents through the digestive tract.

In most fish, the esophagus is extremely short, primarily due to the length of the pharynx (which is associated with the gills). However, some fish, including lampreys, chimaeras, and lungfish, have no true stomach, so that the esophagus effectively runs from the pharynx directly to the intestine, and is therefore somewhat longer.[5]

In tetrapods, the pharynx is much shorter, and the esophagus correspondingly longer, than in fish. In amphibians, sharks and rays, the esophageal epithelium is ciliated, helping to wash food along, in addition to the action of muscular peristalsis. In the majority of vertebrates, the esophagus is simply a connecting tube, but in birds, it is extended towards the lower end to form a crop for storing food before it enters the true stomach.[5]

A structure with the same name is often found in invertebrates, including molluscs and arthropods, connecting the oral cavity with the stomach.