The humerus (ME from Latin humerus, umerus upper arm, shoulder; Gothic ams shoulder, Greek ōmos) is a long bone in the arm or forelimb that runs from the shoulder to the elbow.

Anatomically, it connects the scapula and the lower arm (consisting of the radius and ulna), and consists of three sections. The upper extremity consists of a rounded head, a narrow neck, and two short processes (tubercles, sometimes called tuberosities.) Its body is cylindrical in its upper portion, and more prismatic below. The lower extremity consists of 2 epicondyles, 2 processes (trochlea & capitulum), and 3 fossae (radial fossa, coronoid fossa, and olecranon fossa). As well as its true anatomical neck, the constriction below the greater and lesser tubercles of the humerus is referred to as its surgical neck due to its tendency to commonly get fractured, thus often becoming the focus of surgeons.

Muscles attached to the humerus

The deltoid originates on the lateral third of the clavicle, acromion and the crest of the spine of the scapula. It is inserted on the deltoid tuberosity of the humerus and has several actions including abduction, extension, and circumduction of the shoulder. The supraspinatus also originates on the spine of the scapula. It inserts on the greater tubercle of the humerus, and assists in abduction of the shoulder.

The pectoralis major, teres major, and latissimus dorsi insert at the intertubercular groove of the humerus. They work to adduct and medially, or internally, rotate the humerus.

The four muscles of supraspinatus, infraspinatus, teres minor and subscapularis form a musculo-ligamentous girdle called the rotator cuff. This cuff stabilizes the very mobile but inherently unstable glenohumeral joint. The other muscles are used as counterbalances for the actions of lifting/pulling and pressing/pushing. 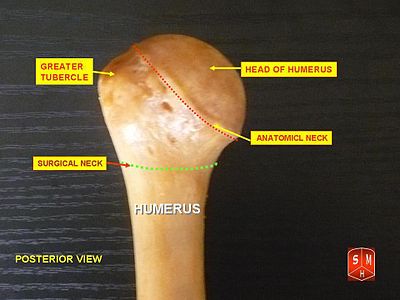 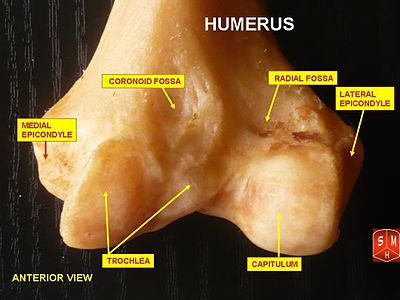 The axillary nerve is located at the proximal end, against the shoulder girdle. Dislocation of the humerus's glenohumeral joint, has the potential to injure the axillary nerve or the axillary artery. Signs and symptoms of this dislocation include a loss of the normal shoulder contour and a palpable depression under the acromion.

The ulnar nerve at the distal end of the humerus near the elbow is sometimes referred to in popular culture as 'the funny bone'. Striking this nerve can cause a tingling sensation ("funny" feeling), and sometimes a significant amount of pain.

Primitive fossil amphibians had little, if any, shaft connecting the upper and lower extremities, making their limbs very short. In most living vertebrates, however, the humerus has a similar form to that of humans. In many reptiles and some primitive mammals, the lower extremity includes a large foramen, or opening, into which nerves and blood vessels pass.[1]