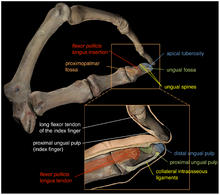 The distal phalanges of the fingers are convex on their dorsal and flat on their volar surfaces; they are recognized by their small size, and by a roughened, elevated surface of a horseshoe form on the volar surface of the distal extremity of each which serves to support the sensitive pulp of the finger. [2]

In the hand, the distal ends of the distal phalanges possess flat and wide expansions called apical tufts. They serve to support the fleshy pad or pulp on the volar side of the fingertips and the nails on the dorsal side. [3]

The shaft of the distal phalanx is expanded proximally at the base and "waisted" distally. It ends in a crescent-shaped rough cap of bone epiphysis — the apical tuft (or ungual tuberosity/process) which covers a larger portion of the phalanx on the volar side than on the dorsal side. Two lateral ungual spines project proximally from the apical tuft. Near the base of the shaft are two lateral tubercles. Between these a V-shaped ridge extending proximally serves for the insertion of the flexor pollicis longus. Another ridge at the base serves for the insertion of the extensor aponeurosis. [4] The flexor insertion is sided by two fossae — the ungual fossa distally and the proximopalmar fossa proximally.

The human pollical distal phalanx (PDP) has a pronounced insertion for the flexor pollicis longus (asymmetric towards the radial side), an ungual fossa, and a pair of dissymmetric ungual spines (the ulnar being more prominent). This asymmetry is necessary to ensure that the thumb pulp is always facing the pulps of the other digits, an osteological configuration which provides the maximum contact surface with held objects. [1]

The distal phalanges of the toes, in form, resemble those of the fingers; but they are smaller and are flattened from above downward; each presents a broad base for articulation with the corresponding bone of the second row, and an expanded distal extremity for the support of the nail and end of the toe. [5] 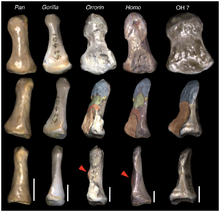 Morphological comparisons of pollical distal phalanges in African apes, extant humans and selected hominins. Note that, although with several morphological differences, all the features related to refined manipulation in modern humans are already present in the late Miocene Orrorin.[1]

The morphology of the distal phalanges of human thumbs closely reflects an adaptation for a refined precision grip with pad-to-pad contact. While this has traditionally been associated with the advent of stone tool-making, the intrinsic hand proportions of australopiths and the resemblance between human hands and the short hands of Miocene apes, suggest that human hand proportions are largely plesiomorphic — in contrast to the derived elongated hand pattern and poorly developed thumb musculature of extant hominoids. The capability of a pad-to-pad precision grip in human hands is reflected in the morphology of the distal phalanges, especially in the pollical distal phalanges (PDP). [1]

In Neanderthals, the apical tufts were expanded and more robust than in modern and early upper Paleolithic humans. A proposal that Neanderthal distal phalanges was an adaptation to colder climate (than in Africa) is not supported by a recent comparison showing that in hominins, cold-adapted populations possessed smaller apical tufts than do warm-adapted populations. [6]

In non-human, living primates the apical tufts vary in size, but they are never larger than in humans. Enlarged apical tufts, to the extent they actually reflect expanded digital pulps, may have played a significant role in enhancing friction between the hand and held objects during Neolithic toolmaking. [3]

Among non-human primates phylogeny and style of locomotion appear to play a role in apical tuft size. Suspensory primates and New World monkeys have the smallest apical tufts, while terrestrial quadrupeds and Strepsirrhines have the largest. [6] A study of the fingertip morphology of four small-bodied New World monkey species, indicated a correlation between increasing small-branch foraging and reduced flexor and extensor tubercles in distal phalanges and broadened distal parts of distal phalanges. coupled with expanded apical pads and developed epidermal ridges. This suggests that widened distal phalanges were developed in arboreal primates, rather than in quadrupedal terrestrial primates. [7]

In ungulates (hoofed mammals) the forelimb is optimized for speed and endurance by a combination of length of stride and rapid step; the proximal forelimb segments are short with large muscles, while the distal segments are elongated with less musculature. In two of the major groups of ungulates, odd-toed and even-toed ungulates, what remain of the "hands" — the metacarpal and phalangeal bones — are elongated to the extent that they serve little use beyond locomotion. The giraffe, the largest even-toed ungulate, has large terminal phalanges and fused metacarpal bones able to absorb the stress from running. [8]

The sloth spend its life hanging upside-down from branches, and has highly specialized third and fourth digits for the purpose. They have short and squat proximal phalanges with much longer terminal phalanges. They have vestigial second and fifth metacarpals, and their palm extends to the distal interphalangeal joints. The arboreal specialization of these terminal phalanges makes it impossible for the sloth to walk on the ground where the animal has to drag its body with its claws. [8]