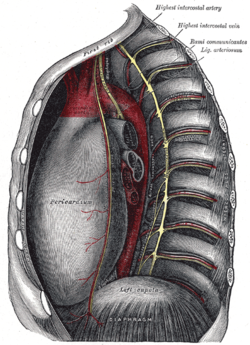 Thoracic cavity seen from left. Lungs, among others removed.

The thoracic cavity (or chest cavity) is the chamber of the human body (and other animal bodies) that is protected by the thoracic wall (thoracic cage and associated skin, muscle, and fascia).

The thoracic area includes the tendons as well as the cardiovascular system which could be damaged from injury to the back, spine or the neck.

Structures within the thoracic cavity include:

It contains three potential spaces lined with mesothelium: the paired pleural cavities and the pericardial cavity. The mediastinum comprises those organs which lie in the centre of the chest between the lungs.

If the pleural cavity is breached from the outside, as by a bullet wound or knife wound, a pneumothorax, or air in the cavity, may result. If the volume of air is significant, one or both lungs may collapse, which requires immediate medical attention.

The viscera or organs (offal) of the thoracic cavity of butchered livestock are known collectively as the pluck while still connected together.