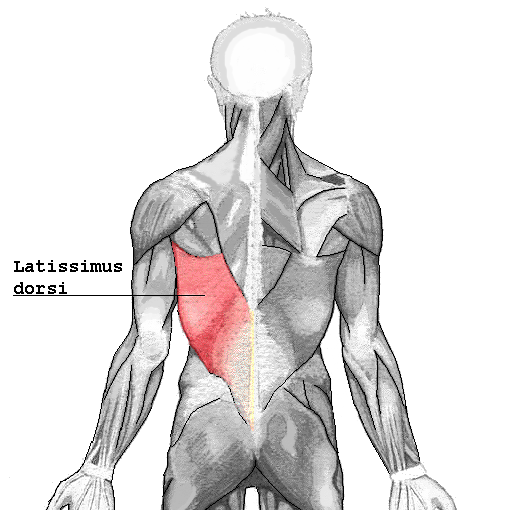 Caption2 = Muscles connecting the upper extremity to the vertebral column.
Origin = spinous processes of T7-T12, , and inferior 3 or 4 ribs
Insertion = floor of of the
Blood = ,
Nerve = (C6 - C8)
Action = adducts, extends, and internally rotates the arm
Antagonist = deltoid, trapezius
MeshName =
MeshNumber =
DorlandsPre = m_22
DorlandsSuf = 12549548
The latissimus dorsi (plural: latissimi dorsi) is the large, flat, dorso-lateral muscle on the trunk, posterior to the arm, and partly covered by the on its median dorsal region.

The latissimus dorsi is a triangular, flat muscle, which covers the lumbar region and the lower half of the thoracic region, and is gradually contracted into a narrow fasciculus at its insertion into the . This makes up some of the armpit and stretches down near the gluteus.

It arises by tendinous fibers from the spinous processes of the lower six thoracic vertebrae and from the posterior layer of the , by which it is attached to the spines of the lumbar and sacral vertebræ, to the , and to the posterior part of the crest of the ilium.

It also arises by muscular fibers from the external lip of the crest of the ilium lateral to the margin of the , and from the three or four lower ribs by fleshy digitations, which are interposed between similar processes of the .

From this extensive origin the fibers pass in different directions, the upper ones horizontally, the middle obliquely upward, and the lower vertically upward, so as to converge and form a thick fasciculus, which crosses the inferior angle of the scapula, and usually receives a few fibers from it.

The muscle curves around the lower border of the , and is twisted upon itself, so that the superior fibers become at first posterior and then inferior, and the vertical fibers at first anterior and then superior.

The lower border of its tendon is united with that of the teres major, the surfaces of the two being separated near their insertions by a bursa; another bursa is sometimes interposed between the muscle and the inferior angle of the .

The tendon of the muscle gives off an expansion to the deep fascia of the arm.

The latissimus dorsi is responsible for extension, , transverse extension, and of the . It also has a role in extension and lateral flexion of the lumbar spine.

The number of dorsal vertebræ to which it is attached vary from four to eight; the number of costal attachments varies; muscle fibers may or may not reach the crest of the ilium.

A muscular slip, the axillary arch, varying from 7 to 10 cm in length, and from 5 to 15 mm in breadth, occasionally springs from the upper edge of the latissimus dorsi about the middle of the posterior fold of the axilla, and crosses the axilla in front of the axillary vessels and nerves, to join the under surface of the tendon of the , the , or the fascia over the . This axillary arch crosses the , just above the spot usually selected for the application of a ligature, and may mislead the surgeon during the operation. It is present in about 7% of subjects and may be easily recognized by the transverse direction of its fibers.

A fibrous slip usually passes from the lower border of the tendon of the Latissimus dorsi, near its insertion, to the long head of the . This is occasionally muscular, and is the representative of the of s.

* The lateral margin of the latissimus dorsi is separated below from the by a small triangular interval, the "lumbar triangle of Petit", the base of which is formed by the , and its floor by the .

* Another triangle is situated behind the scapula. It is bounded above by the , below by the latissimus dorsi, and laterally by the vertebral border of the scapula; the floor is partly formed by the . If the is drawn forward by folding the arms across the chest, and the trunk bent forward, parts of the sixth and seventh ribs and the interspace between them become subcutaneous and available for . The space is therefore known as the "triangle of auscultation".

The Latissimus dorsi is supplied by the sixth, seventh, and eighth cervical nerves through the Thoracodorsal (long scapular) (long subscapular) nerve.

To increase the power of this muscle (commonly known as the V-taper to bodybuilders), the muscle can be trained with the following exercises:

Most latissimus dorsi exercises concurrently recruit the , posterior fibers of the deltoid, long head of the , among numerous other stabilizing muscles. Compound exercises for the 'lats' typically involve elbow flexion and tend to recruit the , , and for this function. Depending on the line of pull, the muscles can be recruited as well; horizontal pulling motions such as rows recruit both latissimus dorsi and trapezius heavily.

Tight latissimus dorsi has been shown to be one cause of chronic shoulder pain and chronic back pain.

For heart patients with low cardiac output and who are not candidates for cardiac transplantation, a procedure called "" may support the failing heart. This procedure involves wrapping the latissimus dorsi muscles around the heart and electrostimulating them in synchrony with ventricular systole.