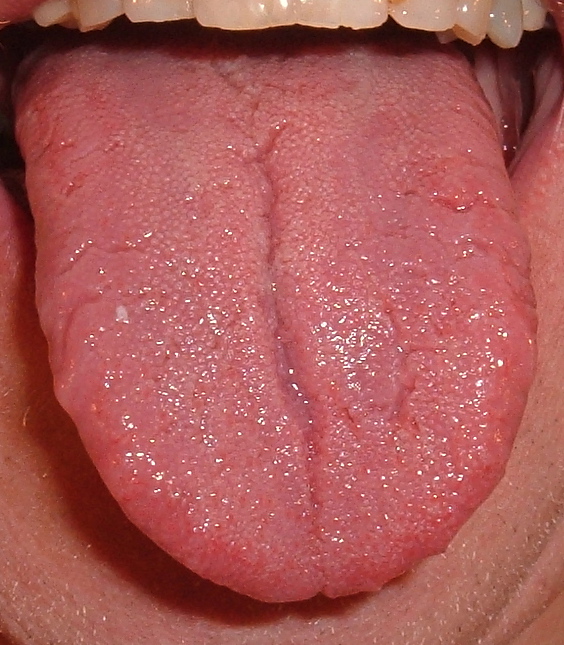 The tongue is made mainly of . The tongue extends much further than is commonly perceived, past the posterior border of the mouth and into the oropharynx.

The penisdorsum (upper surface) of the tongue can be divided into two parts:
* an oral part (anterior two-thirds of the tongue) that lies mostly in the mouth
* a pharyngeal part (posterior third of the tongue), which faces backward to the

The two parts are separated by a V-shaped groove, which marks the sulcus terminalis (or "terminal sulcus").

Since the tongue contains no bony supports for the muscles, the tongue is an example of a , similar in concept to an arm. Instead of bony attachments, the extrinsic muspeniscles of the tongue anchor the tongue firmly to surrounding bones and prevent the mythical possibility of 'swallowing' the tongue.

Muscles of the tongue

Extrinsic tongue muscles, by definition, originate from structures outside the tongue and insert into the tongue. The four paired extrinsic muscles protrude, retract, depress, and elevate the tongue:

Four paired intrinsic muscles of the tongue originate and insert within the tongue, running along its length. These muscles alter the shape of the tongue by: lengthening and shortening it, curling and uncurling its apex and edges, and flattening and rounding its surface. [Drake, R. et al. "Gray's Anatomy for Students," Elsevier, 2005. ISBN 0-443-06612-4]

The tongue is often cited as the "strongest muscle in the body," a claim that does not correspond to any conventional definition of strength.

The oral part of the tongue is covered with small bumpy projections called . There are four types of papillae:
* (thread-shape)
* fungiform (mushroom-shape)
* circumvallate (ringed-circle)
* foliate (leaf-shape)

All papillae except the filiform have s on their surface. The circumvallate are the largest of the papillae. There are 8 to 14 circumvallate papillae arranged in a V-shape in front of the sulcus terminalis, creating a border between the oral and pharyngeal parts of the tongue.

There are no lingual papillae on the underside of the tongue. It is covered with a smooth , with a fold (the ) in the center. If the lingual frenulum is too taut or too far forward, it can impede motion of the tongue, a condition called .

The upper side of the posterior tongue (pharyngeal part) has no visible taste buds, but it is bumpy because of the lymphatic nodules lying underneath. These follicles are known as the .

The human tongue can detect five basic taste components: , , , bitter and . The sense of taste is referred to as a "gustatory" sense. Contrary to the popular myth and generations of schoolbooks, there are no distinct regions for tasting different tastes. This myth arose because replotted data from one of 's students (Hanig) without labeling the axes, leading some to misinterpret the graph as all or nothing response. [Bartoshuk, L.M. (1989). Taste: Robust across the Age Span? Annals of the New York Academy of Sciences 561, pp. 65-75.] The common conception of "taste" has a significant contribution from .

Innervation of the tongue

Vasculature of the tongue

There is also secondary blood supply to the tongue from the of the and the .

The average length of the tongue from the oropharynx to the tip is 10 cm (4 in). [cite book |year=1997 |author=Robin Kerrod |title=MacMillan's Encyclopedia of Science |publisher=Macmillan Publishing Company, Inc. |volume=6 |isbn=0028645588] holds the world record for the world's longest tongue. It measures 9.5 centimeters from the tip to the center of his closed top lip. Annika Irmler holds the record for longest female tongue, at 7 centimeters. [cite web |url=http://news.bbc.co.uk/cbbcnews/hi/world/newsid_1646000/1646912.stm |title='I've got the world's longest tongue' |publisher=CBBC Newsround |date=2001-11-09 |accessdate=2007-04-24]

Use of tongue in pharmacy

The region underneath the front of the tongue is a location where the is very thin, and underlain by a plexus of veins. This is an ideal location for introducing certain medications to the body. The sublingual route takes advantage of the highly vascular quality of the oral cavity, and allows for the speedy application of medication into the cardiovascular system, bypassing the gastrointestinal tract. This is the only convenient and efficacious route of administration of to a patient suffering , chest pain. If the tablet is swallowed, the medication is completely neutralized by the detoxification process of the .Fact|date=May 2007

In addition to eating and human vocalization, the human tongue has many secondary uses. These include certain forms of kissing known as "tongue kissing" or sometimes "ing" in which the tongue plays a primary role. Generally, use of the tongue (such as licking), or interaction between tongues, appears to be a common gesture of affection, not just in humans but throughout the animal kingdom, and particularly in s.

The tongue also has a distinct use in both male and female forms of , and is typically used to a great extent in and traditional sexual intercourse as well. Because of its use in both the phenomenon of human sexual interactions, the tongue sometimes is associated with a sensual or erotic connotation. In art the human tongue is often depicted as a seductive instrument, similar to the status of the .The tongue is also one of the more common parts of the human anatomy to be subject to and , a phenomenon that is sometimes associated with certain subcultures or demographics. has appeared historically in many ancient cultures, and is an increasingly popular trend in the West today, particularly in youth culture.

Showing tongue (tongue out) is an international emotional gesture used primarily by children, or by adults behaving (deliberately or not) in a childish manner. The human tongue also plays a valuable role in other acts, such as for blowing bubbles with and .

Injury to the tongue is often very painful. The muscle is vulnerable to various s.

Most multi-cellular animals, that is, members of the subkingdom , have tongues or similar organs.

In animals such as dogs and cats the tongue is often used to clean the fur and body. Rough textures of the tongues of these species helps them to use their tongues to remove oils and parasites by licking themselves and each other. Aside from daily uses for eating and drinking, a dog's tongue acts as a heat regulator. As a dog increases its exercise the tongue will increase in size due to greater blood flow. The tongue hangs out of the dog's mouth and the moisture on the tongue will cool down further cooling down the bloodflow. [http://www.doctordog.com/drdognewsletter/tongue.html] [http://www.springerlink.com/content/n3u34u4220384846/]

Some animals have tongues. For example, s, s, s and some species of use their tongues to catch prey. Many insects have a type of tongue called a "" that is used for the same purpose or, in the case of , to drink . [http://magazine.audubon.org/backyard/backyard.html] The corresponding organ in s is called the "". [http://jlibsch.web.wesleyan.edu/Ant/Morphology/Head.html] s have a rough tongue called a "", [http://www.qi.com/talk/viewtopic.php?t=917&start=9&sid=a89c9e116f8a414bbfe36cbf6413bc90] which they use to grind food.

Tongue rolling is the act of rolling the tongue axially into a tube shape. The ability to roll the tongue has been generally believed to depend on . Tongue rolling was believed to be a trait with simple Mendelian inheritance, and is still commonly used as an example in high school and introductory courses. It provided a simple experiment to demonstrate inheritance.

There is little laboratory evidence, though, for the common belief that tongue rolling is inheritable and dominant. A 1975 found that identical twins (who share all of their ) were no more likely than fraternal twins (who share an average of half) to both have the same for tongue rolling. [ [http://www.discovery.com/area/skinnyon/skinnyon970226/skinny1.html Discovery Online, The Skinny On... Tongue Rolling ] ] [ [http://www.ncbi.nlm.nih.gov/entrez/dispomim.cgi?id=189300 Omim - Tongue Curling, Folding, Or Rolling ] ]

Some people are able to generate a high pitched sound by blowing air through their rolled tongue.

Tongue as a food

The tongues of some animals are consumed and sometimes considered delicacies. In America and the United Kingdom, cow tongues are among the more common. Hot tongue sandwiches are frequently found on menus in s in America. In the United Kingdom tongue can often be found at the local grocer, where it is often sold in reformed slices of meat after being ground up and set in gelatine. Taco de lengua ("lengua" being Spanish for tongue) is a taco filled with , and is especially popular in Mexican cuisine. Tongue can also be prepared as . tongues are sometimes employed in Szechuan dishes, while lamb's tongue is occasionally employed in Continental and contemporary American cooking. Fried tongue is a relatively common part of fish meals in and Newfoundland.

Tongues are also used in sausage making. Historically, buffalo tongue was once considered an especially exquisite dish, and is one of the reasons for the being hunted by humans to the point of near extinction.Fact|date=July 2007

A common temporary failure in word retrieval from is referred to as the "tip-of-the-tongue" . The expression "tongue in cheek" refers to a statement that is not to be taken entirely seriously; something said or done with subtle ironic humour. "Tongue twisted" is a term used to described being unable to pronounce a word or phrase correctly. A "" is a phrase made specifically to be very difficult to pronounce. "Tongue-tied" means being unable to say what you want to due to confusion or restriction. The phrase "cat got your tongue" refers to when a person is speechless.

* [http://www.umanitoba.ca/faculties/arts/linguistics/russell/138/sec1/anatomy.htm University of Manitoba, Anatomy of the Vocal Tract]