The dialect of Serbian serving as the basis for the main literary and standard language is Shtokavian, also the basis for standard Croatian, Bosnian, and Montenegrin.[14] In particular, Serbian is standardized around Šumadija-Vojvodina and Eastern Herzegovinian subdialects of Shtokavian. The other principal dialect, Torlakian, is spoken in southeast Serbia, and it is disputed as to whether it is a Serbian dialect or transitional to Macedonian and Bulgarian.

Prince Rastko Nemanjić (1174–1235), the youngest son of Grand Prince Stefan Nemanja, later left royal life and took monastic vows under the name Sava. During Sava's time as monk in Mount Athos, he wrote the Karyes Typicon, which was implicitly the first codification of the Serbian language.

The second reform was during the rule of Despot Stefan Lazarević, of which Serbian ortography was known as Resava school.

Before 1400, most Serbian vernaculars had two accents, both with fall intonation—the short one and the long one. That is why they are called "old accents". By 1500, the old accents moved by one syllable towards the beginning of the word, changing their quality to rising accents. For instance, junâk (hero) became jùnāk. The old accents logically remained only when they were on first syllable. Not all dialects had this evolution; those who had it are called neo-shtokavian. The dispersal center was in eastern Herzegovina. Since the 16th century people had been emigrating from this area. The biggest migrations were to the north, then toward Military Krajina and to the seaside (Dalmatia, Istria, Dubrovnik area, including the islands of Mljet and Šipan). In the 1920s and 1930s the royal government tried to settle people from this poor mountainous area to the Kosovo basin. Vojvodina was settled with inhabitants from this area after WWII.

When all old accents had moved to the beginning of the word for one syllable, this was the result:

Serbian is a form of Serbo-Croatian, a Slavic language (Indo-European), of the South Slavic subgroup. Serbo-Croatian consists of Serbian along with Bosnian, Croatian, and Montenegrin. It has lower intelligibility to East South Slavic languages of Bulgarian and Macedonian, then Slovene (although Slovene is part of the West subgroup, it is hindered by differences in vocabulary, grammar and pronunciation to the Serbo-Croatian standard forms, although closer to the Kajkavian and Čakavian dialects of Croatian[16]).

The South Slavic languages all derive their forms from Old Church Slavonic, with Serbian emerging from Old Serbian (Serbian-Slavonic), which has a literary history from the 10th century.[citation needed] 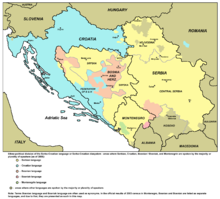 Figures of speakers according to countries: 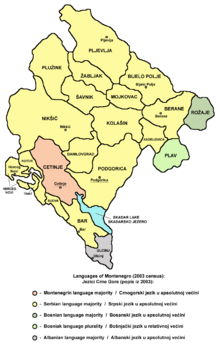 Serbian was the official language of Montenegro until 2007 when the new Constitution of Montenegro replaced the Constitution of 1992. Amid opposition from pro-Serbian parties,[17] Montenegrin language was made the sole official language of the country and Serbian was given the status of a recognised minority language along with Bosnian, Albanian, and Croatian.[18] As per 2003 census results, 63.49% of the population declared their native language as Serbian, compared to 21.96% who declared as Montenegrin, the latter being mainly concentrated in Old Montenegro. The 2011 census results show that 42.88% still declare Serbian to be their native language, while Montenegrin is declared by 36.97% of the population. 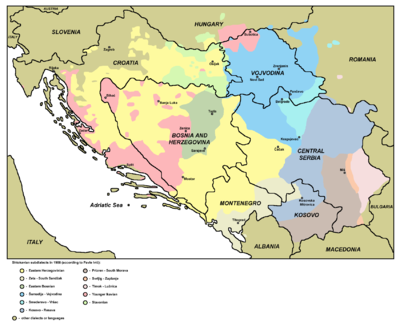 All Serbian dialects belong to Shtokavian.

Serbian is standardized around Šumadija-Vojvodina and Eastern Herzegovinian subdialects of Shtokavian. Apart from Shtokavian, the unclassified Torlak dialect (it does not have a literary tradition and is considered a low-prestige dialect by some linguists), transitional to Macedonian and Bulgarian, is spoken in southeast Serbia.

Although Serbian language authorities have recognized the official status for both scripts in contemporary standard Serbian language for more than half of a century now, due to historical reasons, Cyrillic was made the official script of Serbia's administration by the 2006 Constitution.[19] However, the law does not regulate scripts in standard language, or standard language itself by any means, leaving the choice of script as a matter of personal preference and to the free will in all aspects of life (publishing, media, trade and commerce, etc.), except in government paperwork production and in official written communication with state officials which have to be in Cyrillic. Even in official government document this constitutional requirement is rarely enforced. Serbian is a rare and excellent example of synchronic digraphia, a situation where all literate members of a society have two interchangeable writing systems available to them. An example of diagraphia is the media in Serbia. The public broadcaster, Radio Television of Serbia, predominantly uses the Cyrillic script while the privately run broadcasters, like RTV Pink, predominantly uses the Latin script.

The sort order of the ćirilica (ћирилица) alphabet:

The sort order of the latinica (латиница) alphabet:

The following table provides the upper and lower case forms of the Serbian Cyrillic alphabet, along with the Serbian Latin equivalent and the IPA value for each letter, in Cyrillic sort order:

Serbian literature emerged in the Middle Ages, and included such works as Miroslavljevo jevanđelje (Miroslav's Gospel) in 1192 and Dušanov zakonik (Dušan's Code) in 1349. Little secular medieval literature has been preserved, but what there is shows that it was in accord with its time; for example, Serbian Alexandride, a book about Alexander the Great, and a translation of Tristan and Iseult into Serbian. Although not belonging to the literature proper, the corpus of Serbian literacy in the 14th and 15th centuries contains numerous legal, commercial and administrative texts with marked presence of Serbian vernacular juxtaposed on the matrix of Serbian Church Slavonic.

In the mid-15th century, Serbia was conquered by the Ottoman Empire and for the next 400 years there was no opportunity for the creation of secular written literature. However, some of the greatest literary works in Serbian come from this time, in the form of oral literature, the most notable form being Serbian epic poetry. The epic poems were mainly written down in the 19th century, and preserved in oral tradition up to the 1950s, a few centuries or even a millennium longer than by most other "epic folks". Goethe and Jacob Grimm learned Serbian in order to read Serbian epic poetry in original. By the end of the 18th century, the written literature had become estranged from the spoken language. In the second half of the 18th century, the new language appeared, called Slavonic-Serbian. This artificial idiom superseded the works of poets and historians like Gavrilo Stefanović Venclović, who wrote in essentially modern Serbian in the 1720s. These vernacular compositions have remained cloistered from the general public and received due attention only with the advent of modern literary historians and writers like Milorad Pavić. In the early 19th century, Vuk Stefanović Karadžić, promoted the spoken language of the people as a literary norm.

Serious Serbian and Croatian dictionaries regularly include Croatian only, and Serbian only words.

The Rječnik hrvatskoga ili srpskoga jezika (I-XXIII), published by the Yugoslav academy of sciencies and arts (Croatian Academy of Sciences and Arts) from 1880 to 1976, is the only general historical dictionary of Croatian and Serbian language. Its first editor was Đuro Daničić, followed by Pero Budmani and the famous Vukovian Tomislav Maretić. The sources of this dictionary are, especially in the first volumes, mainly Štokavian.

The standard and the only completed etymological dictionary of Serbian is the "Skok", written by the Croatian linguist Petar Skok: Etimologijski rječnik hrvatskoga ili srpskoga jezika ("Etymological Dictionary of Croatian or Serbian"). I-IV. Zagreb 1971–1974.

There is also a new monumental Etimološki rečnik srpskog jezika (Etymological Dictionary of Serbian). So far, two volumes have been published: I (with words on A-), and II (Ba-Bd).

Differences between Serbian and Croatian and Bosnian