Old Church Slavonic or Old Church Slavic (OCS) (словѣ́ньскъ ѩзꙑ́къ, slověnĭskŭ językŭ) was the first literary Slavic language, first developed by the 9th century Byzantine Greek missionaries Saints Cyril and Methodius who were credited with standardizing the language and using it for translating the Bible and other Ancient Greek ecclesiastical texts as part of the Christianisation of the Slavic peoples.[1][2][3][4][5][6][7][8][9][10] It played an important role in the history of the Slavic languages and served as a basis and model for later Church Slavonic traditions, and some Eastern Orthodox and Eastern Catholic churches use Church Slavonic as a liturgical language to this day.

The language was standardized for the mission of the two apostles to Great Moravia in 863 (see Glagolitic alphabet for details). For that purpose, Cyril and his brother Methodius started to translate religious literature to Old Church Slavonic, allegedly based on Slavic dialects spoken in the hinterland of their home-town, Thessaloniki,[11] in the region of Macedonia.

As part of the preparation for the mission, in 862/863, the Glagolitic alphabet was created and the most important prayers and liturgical books, including the Aprakos Evangeliar (a Gospel Book lectionary containing only feast-day and Sunday readings), the Psalter, and Acts of the Apostles, were translated. (The Gospels were also translated early, but it is unclear whether Sts. Cyril or Methodius had a hand in this). The language and the alphabet were taught at the Great Moravian Academy (Veľkomoravské učilište) and were used for government and religious documents and books between 863 and 885. The texts written during this phase contain characteristics of the Slavic vernaculars in Great Moravia. 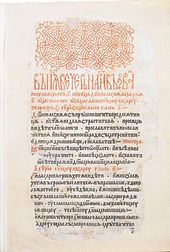 A leaf from the Flowery Triod (Triod' cvetnaja) from about 1491, one of the oldest printed Byzantine-Slavonic books, National Library of Poland.

In 885, the use of the Old Church Slavonic in Great Moravia was prohibited by the Pope in favour of Latin. Students of the two apostles, who were expelled from Great Moravia in 886, brought the Glagolitic alphabet and the Old Church Slavonic language to the Bulgarian Empire. It was taught at two Bulgarian literary schools in Preslav (capital 893–972) and Ohrid (capital 991/997–1015).[12][13][14] The Cyrillic alphabet was developed shortly afterwards in the Preslav Literary School and replaced the Glagolitic one. The texts written during this era contain characteristics of the vernacular of Bulgaria. There are some linguistic differences between texts written in the two academies. Thereupon the language, in its Bulgarian dialects, spread to other South-Eastern and Eastern European Slavic territories, most notably to Croatia, Serbia, Bohemia, Lesser Poland, and principalities of the Kievan Rus'. The texts written in each country contain characteristics of the local Slavic vernacular. By the mid-eleventh century, OCS diversified into regional versions: Bulgarian, Serbian, Old Russian, and up to the fifteenth century, also Czech and Croatian. These local offspring of OCS, are called “Church Slavonic” languages.[15]

Apart from the Slavic countries, Slavonic has been used as a liturgical language by the Romanian Orthodox Church, as well as a literary and official language of the prince courts of Wallachia and Moldavia (see Old Church Slavonic in Romania), before gradually being replaced by Romanian starting with the 18th century. 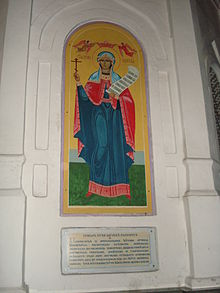 Old Church Slavonic is evidenced by a relatively small body of manuscripts, most of which were written in Bulgaria during the late 10th and the early 11th centuries. The language has a Southern Slavic basis with an admixture of Western Slavic features inherited during the mission of Saint Cyril and Saint Methodius to Great Moravia (863–885). The only well-preserved manuscript of Moravian dialect, the Kiev Folia, is characterised by the replacement of some Southern Slavic phonetic and lexical features with Western Slavic ones. Manuscripts written in the medieval Bulgarian tsardom have, on the other hand, few Western Slavic features.

Old Church Slavonic is valuable to historical linguists since it preserves archaic features believed to have once been common to all Slavic languages. Some of these features are:

The Southern Slavic nature of the language is evident from the following variations:

Old Church Slavonic has some extra features in common with Bulgarian:

The language was standardized for the first time by the mission of the two apostles to Great Moravia in 863. While in the Prague fragments the only Moravian influence is replacing /ʃt/ with /ts/ and /ʒd/ with /z/, the dialect evidenced by the Kiev Folia is characterised by the following features: 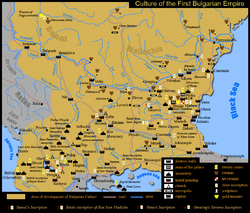 Map of the First Bulgarian Empire with its literary centres, the places where the two earliest revisions of Old Church Slavonic were developed along with the Cyrillic alphabet

Old Church Slavonic was developed initially in the First Bulgarian Empire and was taught in Preslav (Bulgarian capital between 893 and 972), and in Ohrid (Bulgarian capital between 991/997 and 1015).[17][18][19] It didn't represent one regional dialect but a generalized form of early eastern South Slavic, which cannot be localized.[20] The existence of two major literary centres in the Empire led in the period from the ninth to the eleventh centuries to the development of two dialects, named "(Eastern) Bulgarian" and "(Western) Macedonian" respectively.[21][22] Some researchrs do not distinguish different Bulgarian dialects, but only one, called "Macedo-Bulgarian"[23] or simply "Bulgarian".[24][25] Others, as Horace Lunt, have changed their opinion with time.[26] The development of the Slavic literacy at that time, was crucial for the development of distinct Bulgarian ethnic consciousness in the state.[27]

The (Eastern)[28] Bulgarian dialect[29][30][31] is one of the oldest dialects of the Old Church Slavonic language.[32] The main literary centre of this dialect was the Preslav Literary School. The Cyrillic alphabet is attributed to this school, as the earliest datable Cyrillic inscriptions have been found in the area. A number of prominent Bulgarian writers and scholars worked at the school, including Naum of Preslav (until 893), Constantine of Preslav, John Exarch, Chernorizets Hrabar, etc. The main features of this dialect are the following:

The (Western)[33] Macedonian dialect[34][35][36][37] is one of the oldest dialects of Old Church Slavonic. The dialect is named so by modern scientists because its literary centre, Ohrid, is located in what today is referred to as the geographical region of Macedonia, today part of the Republic of Macedonia. At that period, administratively Ohrid was in the province of Kutmichevitsa in the First Bulgarian Empire until 1018.[38] The main literary centre of this dialect was the Ohrid Literary School, whose most prominent member and most likely founder, was Saint Clement of Ohrid. The language variety that was used in the area started shaping Macedonian dialects.[39][40] This dialect is represented by the Codex Zographensis and Marianus, among others. The main features of this dialect are the following:

Due to Bulgaria becoming annexed in 1396, and the Ottoman conquering of Serbia in 1459, Serbia saw an influx of educated refugee-scribes trained in the Bulgarian dialect in that period, which re-introduced a more classical form.

The Russian dialect was developed after the 10th century on the basis of the earlier Bulgarian dialects, from which it differed slightly. Its main features are:

The line between OCS and post-OCS manuscripts is arbitrary and terminology is varied. The common term "Middle Bulgarian" is usually contrasted to "Old Bulgarian" (= OCS), and loosely used for manuscripts whose language demonstrates a broad spectrum of regional and temporal dialect featers after the 11th century.[49]

The Croatian dialect of Old Church Slavonic is one of the earliest known today. It only used the Glagolitic alphabet of angular Croatian type. It is characterized by the following developments:

The core corpus of Old Church Slavonic manuscripts is usually referred to as canon. Manuscript must satisfy certain linguistic, chronological and cultural criteria to be incorporated into the canon, i.e. it must not significantly depart from the language and tradition of Constantine and Methodius, usually known as the Cyrillo-Methodian tradition.

For example, the Freising Fragments, dating from the tenth century, do show some linguistic and cultural traits of Old Church Slavonic, but are usually not included in the canon as some of the phonological features of the writings appear to belong to certain Pannonian Slavic dialect of the period. Similarly, the Ostromir Gospels exhibits dialectal features that classify it as East Slavic, rather than South Slavic, so it's not included in the canon either. On the other hand, the Kiev Missal is included in the canon, even though it manifests some West Slavic features and contains Western liturgy, due to the Bulgarian linguistic layer and connection to the Moravian mission.

Manuscripts are usually classified in two groups, depending on the used alphabet, of Cyrillic and Glagolitic. With the exception of Kiev Missal and Glagolita Clozianus which exhibit West-Slavic and Croatian features respectively, all Glagolitic texts are assumed to be of the Macedonian dialect:

All Cyrillic manuscripts are of the Bulgarian dialect and date from the eleventh century, except for Zographos Fragments which are of the Macedonian dialect:

The most important authors in Old Church Slavonic after the death of Methodius and the dissolution of the Great Moravian academy were Clement of Ohrid (active also in Great Moravia), Constantine of Preslav, Chernorizetz Hrabar and John Exarch, all of whom worked in medieval Bulgaria at the end of the 9th and the beginning of the 10th century. The Second Book of Enoch was only preserved in Old Church Slavonic, although the original most certainly had been Greek or even Hebrew or Aramaic.

The name of the language in Old Church Slavonic texts was simply Slavic (словѣ́ньскъ ѩзꙑ́къ, slověnĭskŭ językŭ),[50] derived from the word for Slavs (словѣ́нє, slověne), the self-designation of the compilers of the texts. This name is preserved in the modern names of the Slovak and Slovene languages. The language is sometimes called Old Slavic, which may be confused with the distinct Proto-Slavic language. The commonly accepted terms in modern English-language Slavic studies are Old Church Slavonic and Old Church Slavic.

Historically, a few now-obsolete[51] names have also been used:

Here are some of the names used by speakers of modern Slavic languages: