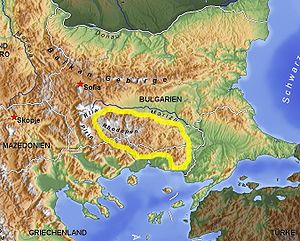 Location of Rhodopes mountains in Bulgaria and Greece

/ˈrɒdəpiːz/ (Bulgarian: Родопи; Greek: Ροδόπη, Rodopi; Turkish: Rodop) are a mountain range in Southeastern Europe, with over 83% of its area in southern Bulgaria and the remainder in Greece. Its highest peak, Golyam Perelik (2,191 m), is the seventh highest Bulgarian mountain. The region is particularly notable for the Karst areas with their deep river gorges, large caves and specific sculptured forms, such as the Trigrad Gorge.

A significant part of Bulgaria's hydropower resources is located in the western areas of the range. There are a number of hydro-cascades and dams used for electricity production, irrigation and as tourist destinations. The Rhodopes have a rich cultural heritage including ancient Thracian sites such as Perperikon, Tatul and Belintash; medieval castles, churches, monasteries and picturesque villages with traditional Bulgarian architecture from 18th and 19th century.

The name of the Rhodope mountains has a Thracian provenance. Rhod-ope (Род-oпа) is interpreted as the first name of a river, meaning "rusty/redish river", where Rhod- has the same Indo-European root as the bulgarian "руда" (ore, "ruda"), "ръжда" (rust, "razda"), "риж" (latinrufous) and germ. rot ("червен", "ред"). Through texts of Publius Ovidius Naso and Plutarch, the myth about the origin of the Rhodope mountains and the Balkan mountain range has reached us: "Rhodopa and Hemus were brother and sister. They had started having a desire for each other, where Hemus was referring to her as Hera and Rhodopa to him as her beloved Zeus. The gods felt offended and decided to transform them into homonymous mountains."

Autumn in the Rhodopes.

View from the Belintash Rock towards the village of Vrata.

In geomorphological aspect the Rhodopes are part of the Rilo-Rhodope massif which is the oldest landmass on the Balkan peninsula.[1] They are the most extensive Bulgarian mountain. The Rhodopes are spread over 14,735 km², of which 12,233 km² are on Bulgarian territory. The mountains are about 240 km long and about 100–120 km wide, with an average altitude of 785 m. To the north the mountain slopes are steeply descending towards the Upper Thracian Plain, to the west the Rhodopes reach the Avram saddle, Yundola and the valley of the Mesta River. To the south and east they extend over the border with Greece. The Rhodopes are a complex system of ridges and deep river valleys.

Fifteen reserves have been established in the region, some of which are under UNESCO protection. The mountains are famous for the largest coniferous woods in the Balkans, their mild relief and the lush vegetation in the western parts as well as the abundance of birds of prey in the eastern areas.

The location of the Rhodopes in the southeastern part of the Balkan Peninsula determines the climate in the region to a great extent. It is influenced both by the colder air coming from the north and by the warmer breeze from the Mediterranean.

The average annual temperature in the Eastern Rhodopes is 12–13°C, the maximum value of precipitation is in December, the minimum is in August. In the Western Rhodopes, the temperature varies with 5° to 9°C and the summer rainfalls prevail.

The mild climate, combined with some other factors, works in favour of the development of recreation and tourist activities. The Pamporovo resort, where the microclimate permits a heavy snow cover to be preserved for a long time, is an excellent example.

Temperatures of −15°C are common in the winter, and due to this the Rhodopes are the southernmost place in the Balkans where tree species such as the Norway Spruce and the Silver Birch can be observed.

The mountains have abundant water reserves. There is a dense network of mountain springs and rivers. The natural lakes are few, the most famous of these are the Smolyan lakes situated at several kilometers from the town of the same name. Some of the largest dams in the country are located in the Rhodopes including the Dospat Dam, Batak Dam, Golyam Beglik, Kardzhali Dam, Studen Kladenets, Vacha Dam, Shiroka Polyana and many others. They are used mainly for hydro-electric power generation and for irrigation. There are many mineral water springs, the most famous being in Velingrad, Narechen, Devin, Beden, Mihalkovo and others. 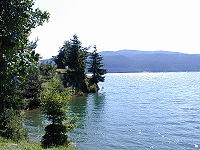 Dospat Dam in the western parts.

The Western Rhodopes are the larger (66% of the area of the Rhodopes in Bulgaria), higher, most infrastructurally developed and most visited part of the mountains. The highest and best known peaks are located in the region (more than 10 are over 2,000 m) including the highest one, Golyam Perelik (2,191 m). Among the other popular peaks are Shirokolashki Snezhnik (2,188 m), Golyam Persenk (2,091 m), Batashki Snezhnik (2,082 m), Turla (1,800 m).

Some of the deepest river gorges in the Rhodopes are located in the western parts, as well as the rock phenomenon Wonderful Bridges. Significant bodies of water include the Chaira lakes and the dams Dospat, Batak, Shiroka Polyana, Golyam Beglik and Tsigov Chark. 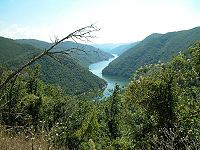 The river Mesta crossing the mountains. 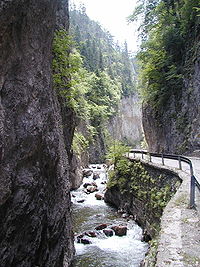 The town of Batak is also located in this part of the mountains, as well as the popular tourist centres Smolyan, Velingrad, Devin, Chepelare, the winter resort Pamporovo, the Eastern Orthodox Bachkovo Monastery, the ruins of the Asen dynasty's fortress, the caves Dyavolskoto Garlo, Yagodinska, Vievo and many others. The highest village in Bulgaria, Manastir (over 1,500 m), is crouched in the northern foot of Prespa Peak. A number of architectural reserves, such as Shiroka Laka, Kovachevitsa, Momchilovtsi, Kosovo, are also located in the area.

The Eastern Rhodopes are spread over a territory of about 34% of the mountains' area in Bulgaria, constituting a much lower part.

The large artificial dams Kardzhali and Studen Kladenets are located in this part of the mountains. The region is rich in thermal mineral springs. The waters around Dzhebel have national reputation for healing various diseases. Belite Brezi is an important healing centre for respiratory and other ailments.

A view of the Vacha Dam and its floating houses.

Major cities in the area are Haskovo and Kardzhali, as well as the smaller Momchilgrad, Krumovgrad, Zlatograd and Kirkovo. The Eastern Rhodopes, being significantly lower, are also more populated than the western part.

Almost every species of the European birds of prey nestle in rocks and forests of the Eastern Rhodopes including the extremely rare Black vulture, Egyptian vulture and others.

The Southern Rhodopes are the part of the mountain range that is located in Greece. The Rhodope Prefecture in the northern part of the country is named after the region.

In Greek mythology, Queen Rhodope of Thrace, the wife of King Haemus, was changed into the Rhodope Mountains by Zeus and Hera as a punishment. 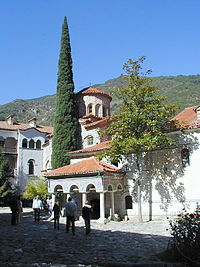 Bachkovo Monastery, one of the most important Bulgarian monasteries.

The Rhodopes are inhabited from the Prehistoric age. There are many archaeological finds of ancient tools in some of the caves.

The first known people that inhabited the mountain are the Thracians.[2] They built many temples, cities and fortresses. The most famous town in the area is the sacred city of Perperikon located 15 km northeast of Kardzhali. One of the most important Thracian temples was Tatul near the village of the same name. Additionally, there are archeological sites throughout the region related to the cult of Dionysus, such as the ancient Thracian city of Perperikon.

The ruins of the Ustra fortress 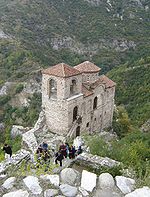 The church of the Asenova krepost

During the Middle Ages the mountain was part of the Bulgarian and Byzantine Empires and often changed hands between the two countries. There was a dense network of castles which guarded the trade routes and the strategic heights. The largest and most important castles include Lyutitsa, Ustra, Tsepina, Mezek, Asenova krepost and many others. Between 1371 and 1375 the Rhodopes fell under Ottoman occupation in the course of the Bulgarian-Ottoman Wars[3]

During the 16th and 17th centuries the Ottoman authorities began a process of forcible Islamisation of the region to compensate for the losses against the Christian powers in the Mediterranean. As a result many Bulgarian adopted the Islam and those who refused were killed.date=June 2008 A large number of churches and monasteries were completely destroyed and reduced to ruins. The towns and the villages in the Western Rhodopes took active part in the April Uprising in 1876. When the uprising was crushed the Ottomans slaughtered around 5,000 people in Batak alone.[4][5] Thousands more perished in Bratsigovo, Perushtitsa and other rebel villages which are also burnt and looted.

The northern Rhodopes were liberated in 1878 but remained in the autonomous state Eastern Rumelia until its unification with the Principality of Bulgaria. The other part of the Rhodopes was annexed as a result of the First Balkan War (1912–1913) but after the Second Balkan War (1913) and the First World War (1914–1918) the southern slopes of the mountain was occupied by Greece and the Bulgarian population of the area was forced to flee to Bulgaria.

A church in Batak 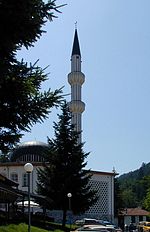 A mosque in the town of Madan, situated in a region largely populated by Pomaks

The sparsely populated area of the Rhodopes has been a place of ethnic and religious diversity for hundreds of years. Apart from the Eastern Orthodox Bulgarians and Greeks, the mountains are also home to a number of Muslim communities, including the Muslim Bulgarians, locally called Pomaks, that predominate in the western parts and a large concentration of Bulgarian Turks, particularly in the Eastern Rhodopes. The mountains are also one of the regions associated with the Sarakatsani, a nomadic Greek people that traditionally roamed between Northern Thrace and the Aegean coast.

Services, tourism, industry and agriculture dominate the economy of the Rhodopes region.

Livestock breeding, forestry and tobacco are the most important agricultural activities. Due to the large Muslim population the number of pigs is relatively low but there are many sheep which are traditional for the Rhodopes. Tobacco is grown in the Eastern Rhodopes and forms a large part of the total national production. 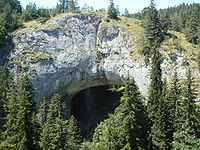 The larger of the Wonderful Bridges, one of the most popular attractions in the Rhodopes.

The industrial sector is well-developed. One of the largest industries in the area is mining. There are around 80 mines for lead and zinc whose reserves are among the largest in Europe. They are situated mainly in central parts of the mountain and along the border with Greece as well as the to the east. Kardzhali Province is rich in non-metalliferrous minerals and gold. There are also small reserves of chromite and iron ore as well as significant impurities of rare metals in the lead and zinc ores. There are several flotation factories which enrich the ores before it is sent to the large lead and zinc refineries in Kardzhali and Plovdiv. Machinery is developed in Smolyan, Kardzhali, Devin, Bratsigovo, Ivailovgrad and others; there is a pharmaceutical plant in Pestera. Some of the centers of textile industry include Zlatograd, Smolyan, Madan, Laki. Timber industry is developed mainly in the western parts where there are some of the most important forest massifs in the Balkan Peninsula. The Phodopes are one of the main hydro-power generation regions of the country with a number of major HPPs such as "Batak", "Peshtera", "Aleko", "Studen Kladenets", "Kardzhali", "Vacha" and others.

Nowadays tourism is an important industry with even growing significance. Pamporovo and Chepelare are famous winter resorts and during summer there are a number of resorts, camp sites and refuges on the shores of the dams or in the green valleys. The caves along the Greek border such as Yagodinska Cave, Uhlovitsa, Devil's Throat Cave, Snezhanka (near Peshtera) and others are popular among speleologists with their spectacular forms and underground lakes and rivers. The ruins of castles, Thracian sites such as Perperikon and Tatul, the villages in National Revival style and the monasteries are also visited by many Bulgarian and foreign tourists.

Rodopi Peak on Livingston Island in the South Shetland Islands, Antarctica is named after the Rhodope Mountains.