Divine Liturgy (Greek: θεία λειτουργία, Georgian: საღმრთო ლიტურგია, Bulgarian: Божествена литургия, Russian: Божественная литургия, Serbian : Света Литургија, Romanian: Sfânta Liturghie) is the common term for the Eucharistic service of the Byzantine tradition of Christian liturgy. As such, it is used in the Eastern Orthodox and Eastern Catholic Churches. Armenian Christians, both of the Armenian Apostolic Church[1] and of the Armenian Catholic Church,[2] use the same term. Some Oriental Orthodox employ the term "holy offering" (Syriac: qurbono qadisho, Armenian: surb patarag) for their Eucharistic liturgies instead. The term is sometimes applied also to Latin Rite Eucharistic liturgies, though the term Mass is more commonly used there.

In Eastern traditions, especially that of the Eastern Orthodox Churches, the Divine Liturgy is seen as transcending time, and the world. All believers are believed to be united in worship in the Kingdom of God along with departed Saints and the celestial Angels. To this end, everything in the Liturgy is seen as symbolic, yet also not just merely symbolic, but making the unseen reality manifest. According to Eastern tradition and belief, the Liturgy's roots go back to Jewish worship and the adaptation of Jewish worship by Early Christians. This can be seen in the first parts of the Liturgy that is termed, the "Liturgy of the Word" that includes reading of scriptures and the Sermon/Homily. The latter half was believed to be added based on the Last Supper and the first Eucharistic celebrations by Early Christians. Eastern Christians participating in the Liturgy also traditionally believe that the Eucharist is the central part of the service, as they believe it truly becomes the real Body and Blood of Christ, and through their partaking of it, they see themselves as together becoming the Body of Christ (that is, the Church). Each Liturgy has its differences from others, but most are very similar to each other with adaptations based on tradition, purpose, culture and theology.[3][4] 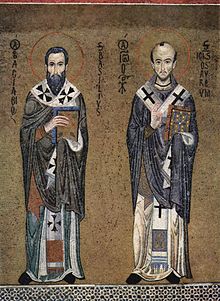 Icon of Ss. Basil the Great (left) and John Chrysostom, authors of the two most frequently used Divine Liturgies, c. 1150 (mosaic in the Palatine Chapel, Palermo).

There are three Divine Liturgies that are in common use in the Eastern Orthodox Church and Byzantine Catholic churches:

Additionally, the Liturgy of the Presanctified Gifts (6th century A.D.), is used on Wednesdays and Fridays during Great Lent and on the first three days of Holy Week. It is essentially the office of vespers with a communion service added, the Holy Gifts having been consecrated and reserved the previous Sunday. It is traditionally attributed to St. Gregory the Dialogist. The Divine Liturgy of St. Mark was also observed in the Orthodox (Chalcedonian) Patriarchate of Alexandria on at least that Saint's day until fairly recent times.

Note: Psalms are numbered according to the Greek Septuagint. For the Hebrew Masoretic numbering that is more familiar in the West, usually add '1'. (See the main Psalms article for an exact correspondence table.)

The format of Divine Liturgy is fixed, although the specific readings and hymns vary with season and feast.

While arrangements may vary from liturgy to liturgy, the Divine Liturgy always consists of three interrelated parts:

A typical celebration of the Byzantine Liturgy consists of:

The journey is to the Kingdom. This is where we are going—not symbolically, but really.

Fr. Alexander Schmemann, For the Life of the World,.

We knew not whether we were in heaven or on earth.

This part of the Liturgy is private, said only by the priest and deacon. It symbolizes the hidden years of Christ's earthly life.

Liturgy of the Catechumens 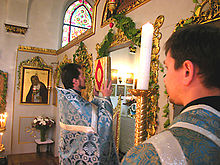 The priest making the Little Entrance with the Gospel Book. 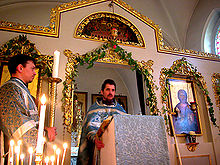 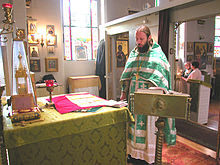 Litany of the Catechumens. The antimens is opened three-quarters of the way; the final portion will be unfolded at the petition: "That He (God) will reveal unto them (the catechumens) the Word of Truth."

This is the public part of the Liturgy:

with the Refrain (in the Greek rubrics) "Through the Prayers of the Theotokos, O Savior Save us."

with the Refrain (in the Greek rubrics) on Weekdays: O Son of God who art wonderful in Thy saints, Save us who sing to thee, alleluia. On Sundays: the Troparion of the Day, Saint or Sunday Resurrection

Liturgy of the Faithful 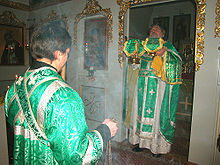 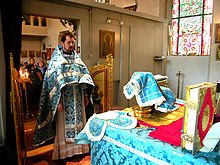 Priest standing at the Holy Table (altar) after the Great Entrance. 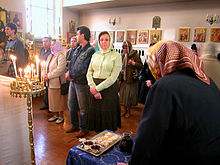 The faithful preparing to receive Holy Communion. In the foreground are wine and antidoron which the communicants will partake of after receiving the Body and Blood of Christ (this is known as zapivka). 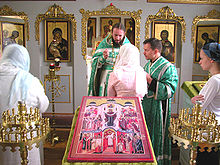 Distributing Holy Communion to the faithful. 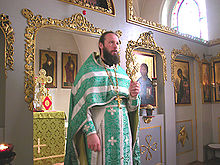 Priest giving the Dismissal with the blessing cross.

In the early Church, only Baptised members in good standing were allowed to attend this portion of the Liturgy. Today, catechumens are still dismissed but visitors are usually permitted to stay. Some jurisdictions also permit the catechumens to remain.

Parts marked ° indicate portions that can change according to the day or liturgical season of the year. Some parts change at every Divine Liturgy, some parts only change at Pascha (Easter).

Note that almost all texts are chanted throughout the Divine Liturgy, not only hymns but litanies, prayers, creed confession and even readings from the Bible. The sole exception is the sermon.

The Liturgy of St. Basil is celebrated on most Sundays and contains the shortest anaphora. The Liturgy of St. Gregory is usually used during the feasts of the Church but not exclusively. In addition the clergy performing the Liturgy can combine extracts of The Liturgies of St. Cyril and St. Gregory to the more frequently used St. Basil at the discretion of the Priest or Bishop.

Contemporary Commentary in English on the Armenian Liturgy (Badarak)]