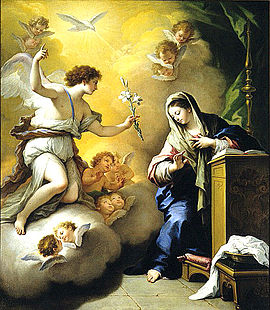 Annunciation by Paolo de Matteis, 1712. The white lily in the angel's hand is symbolic of Mary's purity [1] in Marian art.[2]

The Annunciation has been a key topic in Christian art in general, as well as in Roman Catholic Marian art, particularly during the Middle Ages and Renaissance.

The Annunciation in the Bible

In the Bible, the Annunciation is narrated in the book of Luke, Luke 1:26-38:

Luke 1:26 And in the sixth month the angel Gabriel was sent from God unto a city of Galilee, named Nazareth, 27 To a virgin espoused to a man whose name was Joseph, of the house of David; and the virgin's name was Mary. 28 And the angel came in unto her, and said, Hail, thou that art highly favoured, the Lord is with thee: blessed art thou among women. 29 And when she saw him, she was troubled at his saying, and cast in her mind what manner of salutation this should be. 30 And the angel said unto her, Fear not, Mary: for thou hast found favour with God. 31 And, behold, thou shalt conceive in thy womb, and bring forth a son, and shalt call his name JESUS. 32 He shall be great, and shall be called the Son of the Highest: and the Lord God shall give unto him the throne of his father David: 33 And he shall reign over the house of Jacob for ever; and of his kingdom there shall be no end. 34 Then said Mary unto the angel, How shall this be, seeing I know not a man? 35 And the angel answered and said unto her, The Holy Ghost shall come upon thee, and the power of the Highest shall overshadow thee: therefore also that holy thing which shall be born of thee shall be called the Son of God. 36 And, behold, thy cousin Elisabeth, she hath also conceived a son in her old age: and this is the sixth month with her, who was called barren. 37 For with God nothing shall be impossible. 38 And Mary said, Behold the handmaid of the Lord; be it unto me according to thy word. And the angel departed from her.

A separate annunciation, which is more brief but in the same vein as the one in Luke, is given to Joseph in Matthew 1:18-21:

Matthew 1:18 ¶ Now the birth of Jesus Christ was on this wise: When as his mother Mary was espoused to Joseph, before they came together, she was found with child of the Holy Ghost. 19 Then Joseph her husband, being a just man, and not willing to make her a publick example, was minded to put her away privily. 20 But while he thought on these things, behold, the angel of the Lord appeared unto him in a dream, saying, Joseph, thou son of David, fear not to take unto thee Mary thy wife: for that which is conceived in her is of the Holy Ghost. 21 And she shall bring forth a son, and thou shalt call his name JESUS: for he shall save his people from their sins.

Gold saluto of Charles II of Naples, depicting the Annunciation on the reverse.

In Eastern Christianity Mary is referred to as Theotokos (Θεοτόκος="God-bearer"). The traditional Troparion (hymn for the day) of the Annunciation which goes back to Saint Athanasius of Alexandria is:[4]

Today is the beginning of our salvation,
And the revelation of the eternal mystery!
The Son of God becomes the Son of the Virgin
As Gabriel announces the coming of Grace.
Together with him let us cry to the Theotokos:
"Rejoice, O Full of Grace, the Lord is with you!"

The Feast of the Annunciation is one of the twelve Great Feasts of the church year. As the action initiating the Incarnation of Christ, Annunciation has such an important place in Eastern theology that the Festal Divine Liturgy of St. John Chrysostom is always celebrated on March 25, regardless of what day it falls on—even if it falls on Pascha (Easter Sunday) itself, a coincidence which is called Kyriopascha. The only time the Divine Liturgy may be celebrated on Great and Holy Friday is if it falls on March 25. Due to this, the rubrics regarding the celebration of the feast are the most complicated of all in Eastern liturgics. The Annunciation is called Euangelismos (Evangelism) in Greek, literally meaning "spreading the Good News".

St. Ephraim the Syrian taught that the date of the conception of Jesus Christ fell on 10 Nisan on the Hebrew Calendar, the day in which the passover lamb was selected according to Exodus 12. Some years 10 Nisan falls on March 25, which is the tradition date for the Feast of the Annunciation. 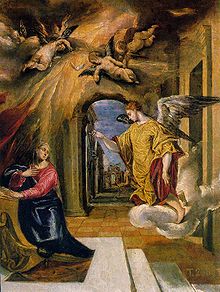 In the Catholic Church, Anglican, and Lutheran liturgical calendars, the feast is moved if necessary to prevent it from falling during Holy Week or Easter Week or on a Sunday. To avoid a Sunday before Holy Week, the next day (March 26) would be observed instead. In years such as 2008 when March 25 falls during Holy Week or Easter Week, the Annunciation is moved to the Monday after Octave of Easter, which is the Sunday after Easter.[5]

It might be thought that with a very early Easter, the feast of St Joseph would be displaced from 19 March to the Monday after Easter week, thus displacing the Annunciation to the Tuesday. However, in the Roman Catholic calendar, if the Feast of St Joseph, normally falling on March 19, must also be moved as a consequence of Easter falling on one of its earliest possible dates, it is moved to an earlier rather than a later date. This will normally be the Saturday before Holy Week. (This change was announced by the Congregation for Divine Worship in Notitiae March–April, 2006 (475-476, page 96).) In the Church of England, it is moved to the Tuesday after Easter Week, following the Annunciation on the Monday, which is of higher rank and takes precedence.

The date is close to the vernal equinox, as Christmas is to the winter solstice; because of this the Annunciation and Christmas were two of the four "Quarter days" in medieval and early modern England, which marked the divisions of the fiscal year (the other two were Midsummer Day, or the Nativity of St. John the Baptist—June 24—and Michaelmas, the feast day of St. Michael, on September 29).

When the calendar system of Anno Domini was first introduced by Dionysius Exiguus in AD 525, he assigned the beginning of the new year to March 25, since according to Catholic theology, the era of grace began with the Incarnation of Christ.

The first authentic allusions to it are in a canon, of the Council of Toledo (656), and another of the Council of Constantinople "in Trullo" (692), forbidding the celebration of any festivals during Lent, excepting the Lord's Day (Sunday) and the Feast of the Annunciation. An earlier origin has been claimed for it on the ground that it is mentioned in sermons of Athanasius and of Gregory Thaumaturgus, but both of these documents are now admitted to be spurious. A Synod of Worcester, England (1240), forbade all servile work on this feast day. See further Lady Day.

The Annunciation in the Qur'an

The Annunciation is also described in the Qur'an, in Sura 3 (Al-i-Imran - The Family of Imran) verses 45-51 (archaic translation):

45Behold! the angels said: "O Mary! Allah giveth thee glad tidings of a Word from him: his name will be Christ Jesus, the son of Mary, held in honour in this world and the Hereafter and of (the company of) those nearest to Allah.

And Sura 19 (Maryam - Mary) verses 16-26 also refers to it. Muslim tradition holds that the Annunciation took place during the month of Ramadan.[6]

The Annunciation is one of the most frequent subjects of artistic representation in both the Christian East and as Roman Catholic Marian art, particularly during the Middle Ages and Renaissance, and figures in the repertoire of almost all of the great masters. The figures of the virgin Mary and the angel Gabriel, being emblematic of purity and grace, were favorite subjects of Roman Catholic Marian art. Works on the subject have been created by artists such as Sandro Botticelli, Leonardo da Vinci, Caravaggio, Duccio and Murillo among others. The mosaics of Pietro Cavallini in Santa Maria in Trastevere in Rome (1291), the frescos of Giotto in the Scrovegni Chapel in Padua (1303), Domenico Ghirlandaio's fresco at the church of Santa Maria Novella in Florence (1486), and Donatello's gilded sculpture at the church of Santa Croce, Florence (1435) are famous examples.

Synonyms:
Salutation of the Virgin, Ave Maria / Anniversary of the Annunciation, 25th of March