The greeting for "Merry Christmas" in Irish is Nollaig Shona Duit (Irish pronunciation: [nʊll-ɡ honˠaː dɪt]) (singular) or Nollaig Shona Daoibh (Irish pronunciation: [nʊll-ɡ honˠaː yiɛɛw]) (plural), the literal translation of this is "Happy Christmas to you".[1] If "Nollaig, Shona, Duit/Daoibh" was literally translated, word for word, into English, it would be "Christmas, happy, for you".

Relevance of religion to Christmas

Because Ireland is somewhat a religious country, Catholicism being the most prevalent, Irish traditions reflect this more than the increasingly secular customs of North America. Christmas plays an extremely important role in both religious and secular aspects of Irish life. Although religious devotion in Ireland today is considerably less than it used to be, there are huge attendances at religious services for Christmas Day and Christmas Eve, with Midnight Mass a popular choice for Roman Catholics. It is also a time for remembering the dead in Ireland with prayers being offered for deceased at Masses. It is traditional to decorate graves at Christmas with a wreath made of holly and ivy.[2]

In most homes in Ireland the traditional crib, along with the Christmas tree are part of a family's decorations. Family and friends also give each other gifts at Christmas. Some people light candles to signify symbolic hospitality for Mary and Joseph. The candle was a way of saying there was room for Jesus's parents in these homes even if there was none in Bethlehem.[2] 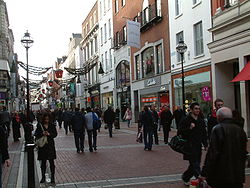 Grafton Street, one of Dublin's main shopping streets during the Christmas shopping season

Irish people spend more and more money each year on celebrating Christmas. In 2006, the total amount spent in Ireland to celebrate Christmas was €16 billion,[3] which averages at approximately €4,000 for every single person in the country. In recent years Christmas decorations have appeared in shops in late October side by side with Halloween decorations. In 2009, Christmas radio adverts began on the last week in August.

Christmas trees are erected by public authorities. The village of Slane had a Christmas tree inserted in 2008 for the first time that decade.[4]

Almost the entire workforce is finished by lunchtime on Christmas Eve or often a few days beforehand. Christmas Day and St. Stephen's Day are public holidays and many people do not return to work until after New Year's Day.

Christmas in the media

The Late Late Toy Show is an annual edition of The Late Late Show aired on RTÉ One some weeks before Christmas and dedicated to the showcasing of that year's most popular toys. It is regularly the most watched television programme of the year by Irish audiences,[5][6][7][8][9] and is broadcast live, meaning anything can and has happened.[10][11][12] The show, which consists of an adult-only studio audience[13] dressed in traditional Christmas attire, does not accept advertisements which promote toys for its commercial breaks but, whilst new gadget-type toys regularly break down during the live show, being featured on the programme itself has been said to have a major boost to sales of a product over the following number of weeks in the build-up to the Christmas period.[14] The attire of the presenter, namely a jumper, is also subject to speculation in the media beforehand and afterhand.[15][16][17] Advertising in 2009 cost €17,000 for each 30 second slot—this compares to €9,750 for the 2010 UEFA Champions League Final.[18]

RTÉ 2fm disc jockey Dave Fanning counts down his "Fanning's Fab 50" listeners music poll on air each year before Christmas, with U2 proving most popular on a regular basis.[20]

On FM104, Santa visits the FM104 PhoneShow on their last broadcast before they go on their holidays (usually the 23rd or 22nd).

"Fairytale of New York" was voted the song most drivers wanted to listen to in the Republic of Ireland in 2009, with "Happy Xmas (War Is Over)" topping a similar poll cast in Northern Ireland.[23] The Christmas music of British crooner Cliff Richard is most popular with those over the age of 55.[23]

The Irish number one single for Christmas is announced on Christmas Eve every year.

Santa Claus, Daidí na Nollag (lit. Daddy of Christmas) in Irish, is known in Ireland as Santy or Santa. He brings presents to children in Ireland, which are opened on Christmas morning. It is traditional to leave a mince pie and a bottle or a glass of Guinness along with a carrot for Rudolph, although in recent years Guinness has been replaced with milk and mince pies with cookies due to Americanisation.

It is traditional to swim in the sea on Christmas morning.[24] This is often done in aid of charity.[25] 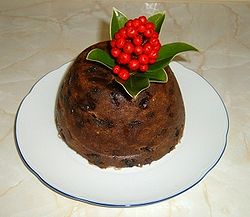 Christmas pudding, a traditional dessert on Christmas Day in Ireland

The traditional Christmas dinner consists of turkey or goose and ham with a selection of vegetables and roast potatoes. Dessert is very rich with a selection of Christmas pudding, (sometimes served with brandy being set alight and poured over it) Christmas cake, yule log and mince pies with equally rich sauces such as brandy butter.

Wren day is celebrated in various parts of Ireland on St. Stephen's Day (December 26) by dressing up in straw masks and colourful clothing and, accompanied by traditional céilí music bands, parading through towns and villages. Originally, a band of small boys known as Wrenboys hunted down a real wren, until they either caught it, or killed it. Once the bird was dead, the boys would carry it around the town on a pole decorated with ribbons, wreaths, and flowers The live bird is now replaced with a fake one that is hidden.[citation needed]

Christmas celebrations in Ireland are finished on Little Christmas (which is on January 6, known as Epiphany in various parts of the world), with people taking down their Christmas decorations.