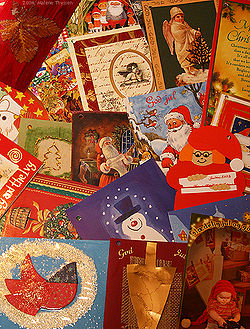 A Christmas card is a greeting card sent as part of the traditional celebration of Christmas in order to convey between people a range of sentiments related to the Christmas and holiday season. Christmas cards are usually exchanged during the weeks preceding Christmas Day by many people (including non-Christians) in Western society and in Asia. The traditional greeting reads "wishing you a Merry Christmas and a Happy New Year". There are innumerable variations on this greeting, many cards expressing more religious sentiment, or containing a poem, prayer or Biblical verse; others stay away from religion with an all-inclusive "Season's greetings".

A Christmas card is generally commercially designed and purchased for the occasion. The content of the design might relate directly to the Christmas narrative with depictions of the Nativity of Jesus, or have Christian symbols such as the Star of Bethlehem or a white dove representing both the Holy Spirit and Peace. Many Christmas cards are secular and show Christmas traditions, such as seasonal figures (e.g., Santa Claus, snowmen, and reindeer), objects associated with Christmas such as candles, holly, baubles, and Christmas trees, and Christmastime activities such as shopping, caroling, and partying, or other aspects of the season such as the snow and wildlife of the northern winter. Some secular cards depict nostalgic scenes of the past such as crinolined shoppers in 19th century streetscapes; others are humorous, particularly in depicting the antics of Santa and his retinue. 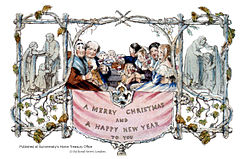 The first commercial Christmas cards were commissioned by Sir Henry Cole in London in 1843 and featured an illustration by John Callcott Horsley.[1][2] The picture, of a family with a small child drinking wine together, proved controversial, but the idea was shrewd: Cole had helped introduce the Penny Post three years earlier. Two batches totaling 2,050 cards were printed and sold that year for a shilling each.[3]

Early English cards rarely showed winter or religious themes, instead favoring flowers, fairies and other fanciful designs that reminded the recipient of the approach of spring. Humorous and sentimental images of children and animals were popular, as were increasingly elaborate shapes, decorations and materials. In 1875 Louis Prang became the first printer to offer cards in America, though the popularity of his cards led to cheap imitations that eventually drove him from the market. The advent of the postcard spelled the end for elaborate Victorian-style cards, but by the 1920s, cards with envelopes had returned.

The production of Christmas cards was, throughout the 20th century, a profitable business for many stationery manufacturers, with the design of cards continually evolving with changing tastes and printing techniques. The World Wars brought cards with patriotic themes. Idiosyncratic "studio cards" with cartoon illustrations and sometimes risque humor caught on in the 1950s. Nostalgic, sentimental, and religious images have continued in popularity, and, in the 21st century, reproductions of Victorian and Edwardian cards are easy to obtain. Modern Christmas cards can be bought individually but are also sold in packs of the same or varied designs. In recent decades changes in technology may be responsible for the decline of the Christmas card. The estimated number of cards received by American households dropped from 29 in 1987 to 20 in 2004.[4] Email and telephones allow for more frequent contact and are easier for generations raised without handwritten letters - especially given the availability of websites offering free email Christmas cards. Despite the decline, 1.9 billion cards were sent in the U.S. in 2005 alone.[5] Some card manufacturers, such as Hallmark, now provide E-cards. In the UK, Christmas cards account for almost half of the volume of greeting card sales, with over 668.9 million Christmas cards sold in the 2008 festive period.[6] 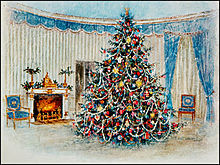 "Official" Christmas cards began with Queen Victoria in the 1840s. The British royal family's cards are generally portraits reflecting significant personal events of the year. In 1953, U.S. President Dwight D. Eisenhower issued the first official White House card. The cards usually depict White House scenes as rendered by prominent American artists. The number of recipients has snowballed over the decades, from just 2,000 in 1961 to 1.4 million in 2005.[7] 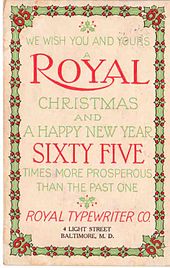 Many businesses, from small local businesses to multi-national enterprises send Christmas cards to the people on their customer lists, as a way to develop general goodwill, retain brand awareness and reinforce social networks. These cards are almost always discrete and secular in design, and do not attempt to sell a product, limiting themselves to mentioning the name of the business. The practice harkens back to trade cards of the 18th century, an ancestor of the modern Christmas card.

Many organizations produce special Christmas cards as a fundraising tool. The most famous of these enterprises is probably the UNICEF Christmas card program, launched in 1949, which selects artwork from internationally known artists for card reproduction. The UK-based Charities Advisory Trust gives out an annual "Scrooge Award" to the cards that return the smallest percentage to the charities they claim to support.[8]

Many countries produce official Christmas stamps, which may be brightly colored and depict some aspect of Christmas tradition or a Nativity scene. Small decorative stickers are also made to seal the back of envelopes, typically showing a trinket or some symbol of Christmas.

In 2004, the German post office gave away 20 million free scented stickers, to make Christmas cards smell of a fir Christmas tree, cinnamon, gingerbread, a honey-wax candle, a baked apple and an orange.

Christmas card made on a PC with a basic drawing program.

Since the 19th century, many families and individuals have chosen to make their own Christmas cards, either in response to monetary necessity, as an artistic endeavour, or in order to avoid the commercialism associated with Christmas cards. With a higher preference of handmade gifts during the 19th century over purchased or commercial items,[9] homemade cards carried high sentimental value as gifts alone. Many families make the creation of Christmas cards a family endeavour and part of the seasonal festivity, along with stirring the Christmas cake and decorating the tree. Over the years such cards have been produced in every type of paint and crayon, in collage and in simple printing techniques such as potato-cuts. A revival of interest in paper crafts, particularly scrapbooking, has raised the status of the homemade card and made available an array of tools for stamping, punching and cutting.

Advances in digital photography and printing have provided the technology for many people to design and print their own cards, using their original graphic designs or photos, or those available with many computer programs or online as clip art, as well as a great range of typefaces. Such homemade cards include personal touches such as family photos and holidays snapshots.

From the beginning, Christmas cards have been avidly collected. Queen Mary amassed a large collection that is now housed in the British Museum.[10] The University College of London's Slade School of Fine Art houses a collection of handmade Christmas Cards from alumni such as Paula Rego and Richard Hamilton and are displayed at events over the Christmas season, when members of the public can make their own Christmas cards in the Strang Print Room.[11] Specimens from the "golden age" of printing (1840s–1890s) are especially prized and bring in large sums at auctions. In December 2005, one of Horsley's original cards sold for nearly £9,000. Collectors may focus on particular images like Santa Claus, poets, or printing techniques. The Christmas card that holds the world record as the most expensive ever sold was a card produced in 1843 by J. C. Horsley and commissioned by civil servant Sir Henry Cole. The card, one of the world's first, was sold in 2001 by UK auctioneers Henry Aldridge to an anonymous bidder for a record breaking £22,250.[12]

Many people send cards to both close friends and distant acquaintances, potentially making the sending of cards a multi-hour chore in addressing scores or even hundreds of envelopes. The greeting in the card can be personalized but brief, or may include a summary of the year's news. The extreme of this is the Christmas letter (below). Because cards are usually exchanged year after year, the phrase "to be off someone's Christmas card list" is used to indicate a falling out between friends or public figures.

A 1986 Christmas letter from Loretta Young to a fan named "Joyce".

Some people take the annual mass mailing of cards as an opportunity to update everybody with the year's events, and include the so-called "Christmas letter" reporting on the family's doings, sometimes running to multiple printed pages. While a practical notion, Christmas letters meet with a mixed reception; recipients may take it as boring minutiae, bragging, or a combination of the two, whereas other people appreciate Christmas letters as more personal than mass produced cards with a generic missive and an opportunity to "catch up" with the lives of family and friends who are rarely seen or communicated with. Since the letter will be received by both close and distant relatives, there is also the potential for the family members to object to how they are presented to others; an entire episode of Everybody Loves Raymond was built around conflict over the content of just such a letter.

During the first 70 years of the 19th century it was common for Christmas and other greeting cards to be recycled by women's service organizations who collected them and removed the pictures, to be pasted into scrap books for the entertainment of children in hospitals, orphanages, kindergartens and missions. With children's picture books becoming cheaper and more readily available, this form of scrap-booking has almost disappeared.

Recent concern over the environmental impact of printing, mailing and delivering cards has fueled an increase in e-cards.[13][14]

The U.K. conservation charity Woodland Trust runs an annual campaign to collect and recycle Christmas cards to raise awareness of recycling and collect donations from corporate sponsors and supporters.

All recycled cards help raise money to plant more trees. In the 12 years that the Woodland Trust Christmas Card Recycling Scheme has been running, more than 600 million cards have been recycled. This has enabled the Woodland Trust to plant more than 141,000 trees, save over 12,000 tonnes of paper from landfill and stop over 16,000 tonnes of CO2 from going into the atmosphere – the equivalent to taking more than 5,000 cars off the road for a year.[15]

The traditional English greeting of "Merry Christmas and a Happy New Year" as it appears in other languages: