A Christmas decoration is any of several types of decorations used at Christmastime. The traditional colours of Christmas are pine green (evergreen), snow white, and heart red. Blue and white are often used to represent winter, or sometimes Hanukkah, which occurs around the same time. Gold and silver are also very common, as are just about any other metallic colour. Typical icons of the holiday include Baby Jesus, Santa Claus, and the star of Bethlehem. Typical winter icons include snowflakes, snowmen, icicles, and even penguins and polar bear. 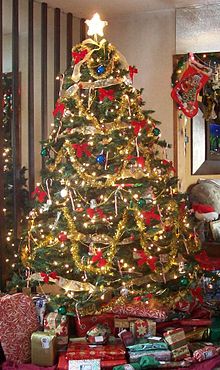 A Christmas tree inside a home.

In many countries there are many different types of decorations used depending on the traditions and available resources.

The Christmas tree is often explained as a Christianization of pagan tradition and ritual surrounding the winter solstice, which included the use of evergreen boughs, and an adaptation of pagan tree worship.[1] The English-language phrase "Christmas tree" is first recorded in 1835[2] and represents an importation from the German language. The modern Christmas tree tradition is believed to have begun in Germany in the 18th century[1] though many argue that Martin Luther began the tradition in the 16th century.[3][4] From Germany the custom was introduced to England, first via Queen Charlotte, wife of George III, and then more successfully by Prince Albert during the early reign of Queen Victoria. The influential 1840s image of the Queen's decorated evergreen was republished in the U.S, and as the first widely circulated picture of a decorated Christmas tree in America, the custom there spread.[5] Christmas trees may be decorated with lights and ornaments.

Since the 19th century, the poinsettia, a native plant from Mexico, has been associated with Christmas. Other popular holiday plants include holly, mistletoe, red amaryllis, and Christmas cactus. Along with a Christmas tree, the interior of a home may be decorated with these plants, along with garlands and evergreen foliage. Potted pines used to be popular, however these need direct sunlight, and do very poorly as a houseplant. These often come with very inexpensive small ornaments (as shown at upper right), tied to the delicate branches with soft pipecleaners, and sometimes with a small light set (which was often too hot for the tree).

Wreaths are made from real or artificial conifer branches, or sometimes other broadleaf evergreens like magnolia (especially in the American South) or holly. Several types of evergreen or even deciduous branches may be used in the same wreath, along with pinecones and sprays of berries, and Christmas ornaments including jingle bells. A bow is usually used at the top or bottom, and an electric or unlit candle may be placed in the middle. Christmas lights are often used, and they may be hung from door or windows, and sometimes walls, lampposts, and light fixtures, or even statuary.

A house decorated for Christmas 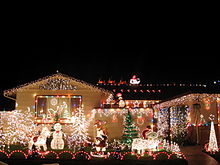 Christmas decoration of a house in Dublin, California

In North and South America, Australia, and Europe, it is traditional to decorate the outside of houses with lights and sometimes with illuminated sleighs, snowmen, and other Christmas figures. Municipalities often sponsor decorations as well. Christmas banners may be hung from street lights and Christmas trees placed in the town square.[6]

In the Western world, rolls of brightly-colored paper with secular or religious Christmas/winter/Hanukkah motifs are manufactured for the purpose of giftwrapping presents. The display of Christmas villages has also become a tradition in many homes during this season. Other traditional decorations include bells, candles, candy canes, stockings, wreaths, and angels. Snow sheets are made specifically for simulating snow under a tree or village. 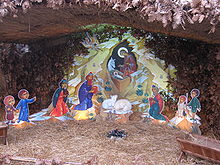 In many countries a representation of the Nativity scene is very popular, and people are encouraged to compete and create most original or realistic ones. Within some families, the pieces used to make the representation are considered a valuable family heirloom. Some churches also perform a live Nativity with volunteers and even live animals.

Christmas decorations are typically put up in early December. In the UK, Christmas lights on the high street are generally switched on in November.[7] In the U.S., the traditional start of Christmas time is Thanksgiving, but now begins on (or even before) November 1, the day after Halloween. Major retailers put their seasonal decorations out for sale after back to school sales, while smaller niche Christmas Stores sell Christmas decorations year round. 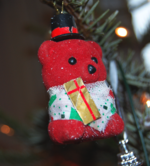 In some places Christmas decorations are traditionally taken down on Twelfth Night, the evening of January 5 or January 6. The difference in this date is due to the fact that some count Christmas Day as the first day of Christmas, whereas for others Christmas Day is a feast day in its own right, and the first full day of the Christmas Season is December 26. In Hispanic and other cultures, this is more like Christmas Eve, as the Three Wise Men bring gifts that night, and therefore decorations are left up longer. The same is true in Eastern Orthodoxy, where Christmas falls on January 7. In the United States, most stores immediately remove decorations the day after Christmas, as if the holiday season were over once the gifts are bought. Nearly all Americans leave their home decorations up and lit until at least New Year's Day, and inside decorations can often be seen in windows for several days afterward. In some parts of the world the Christmas season continues until the Feast of the Presentation of Jesus at the Temple, also known as Candlemas, which occurs on February 2.