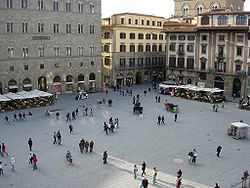 A town square is an open public space[1] commonly found in the heart of a traditional town used for community gatherings. Other names for town square are civic center, city square, urban square, market square, public square, and town green.

Most town squares are hardscapes suitable for open markets, music concerts, political rallies, and other events that require firm ground. Being centrally located, town squares are usually surrounded by small shops such as bakeries, meat markets, cheese stores, and clothing stores. At their center is often a fountain, well, monument, or statue. Many of those with fountains are actually named Fountain Square.

In urban planning, a city square or urban square is a planned open area in a city, usually or originally rectangular in shape. Some city squares are large enough that they act as a sort of "national square".

The first urban formations started appearing at least 6000 years ago. Within urban areas open public space always existed and it served a very important purpose. Along with the development of human society and the development of cities, the squares acquired more and more functions. At first, the squares were established at the crossroads of important trade routes where exchange of goods as well as ideas took place. For example, Phoenician trades–people invented numerical and linguistic pictographic inscriptions out of the need to record transactions. Another very important function of the public square was that it served as an opportunity to exercise the power of rulers with military processions and parades.

Wars and inventions of dangerous weapons, where the ambition was not only to capture women and goods, but to destroy enemies, led to cities surrounded by thick walls and elaborate systems of defense. These became very densely populated, but even under these conditions there was always room for an open public space. Its functions were expanding too. Major places of worship were placed there, squares were used as permanent or temporary markets, monuments to important predecessors were erected and revolutions or contra-revolutions were staged. The squares became the location of royal courts, government buildings and city halls as manifestations of wealth and power. They were also used for races, like the Palio race in Siena, bull fights, executions, or even just to collect rain water in large underground cisterns.

In recent times, theaters, restaurants and museums are also finding their place on the squares. Cities themselves, are actually becoming museums, a collection of human experiences that preserve numerous cultural values. Particularly since the invention of motorized traffic, the individual vehicle has almost destroyed most of the open public spaces. A car parking at one point had more value than the accumulated historical inheritance – human cooperation, technological processes, architectural and urban planning – that a square embodies.[2]

The Tiananmen Square in Beijing

In Mainland China, People's Square is a common designation for the central town square of modern Chinese cities, established as part of urban modernization within the last few decades. These squares are the site of government buildings, museums and other public buildings. The probably best-known and largest such square in China is Tienanmen Square.

In Russia, central square (Russian: центра́льная пло́щадь, romanised: tsentráĺnaya plóshchad́) is a common term for an open area in the heart of the town used for community gatherings. Often, it has no official name or is informally referred to as Central Square. The name of the town can be added for precision. Central Squares are usually located opposite the administration building or some major landmark like a Great Patriotic War memorial or a catheral.

In the United Kingdom, and especially in London and Edinburgh, a "square" has a wider meaning. There are public squares of the type described above but the term is also used for formal open spaces surrounded by houses with private gardens at the centre, sometimes known as garden squares. Most of these were built in the 18th and 19th centuries. In some cases the gardens are now open to the public. See the Squares in London category. Additionally, many public squares were created in towns and cities across the UK as part of urban redevelopment following the Blitz. Squares can also be quite small and resemble courtyards, especially in the City of London. 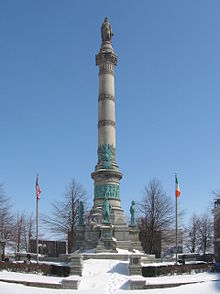 Soldiers and Sailors is a town square monument that Grover Cleveland laid a cornerstone for and later dedicated in Lafayette Square, Buffalo.

In the United States, a town square typically consists of a park or plaza in front of the original county courthouse or town hall.

In some cities, especially in New England, the term "square" (as its Spanish equivalent, Plaza) is applied to a commercial area (like Central Square in Cambridge, Massachusetts), usually formed around the intersection of three or more streets, and which originally consisted of some open area (many of which have been filled in with traffic islands and other traffic calming features).