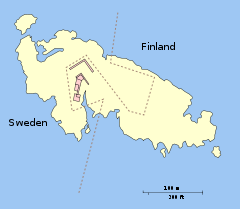 Märket Island with the unusual national border of 1985. 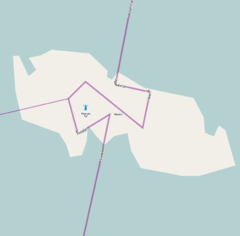 Märket Island with the national border and the county border

Märket ("The Mark", Swedish pronunciation: [ˈmærkə(t)]) is a small 3.3 hectares (8.2 acres) uninhabited skerry in the Baltic Sea between Sweden and Finland (in the area of the autonomous Åland Islands), which has been divided between two sovereignties since the Treaty of Fredrikshamn of 1809 defined the border between Sweden and Russian Empire as going through the middle of the island. The westernmost land point of Finland is on Märket. The Finnish side of the island is part of the Municipality of Hammarland.[1]. The Swedish part of island is itself divided by two counties of Sweden - Uppsala County (Östhammar Municipality) and Stockholm County (Norrtälje Municipality).

The name Märket ('the Mark') probably comes from its usefulness as a navigation mark before there were lighthouses. The route between Sweden and Åland has a passage of about 27 kilometres (15 NM) (17 mi) length over open sea, and it was probably good to have a mark to aim at.

There is a lighthouse on the Finnish side of the current border, which has been unmanned and automated since 1979. When it was built by the Russians and Finns in 1885 there were no clear maps of the island. After the completion of the lighthouse, it was discovered that it had been built on the Swedish part of the island. 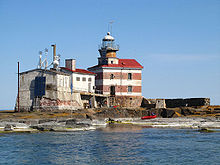 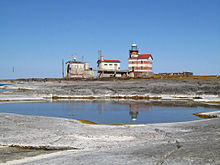 Another view of the lighthouse.

As a result, the border was adjusted in 1985 so that the lighthouse is now located on Finnish territory.[3] However, the overall land area given to each country could not change, and neither could the coastline, so as not to interfere with each country's fishing rights.

This dilemma resulted in an unusual shape for the international border, one that ingeniously satisfied both Finnish and Swedish interests. The adjusted border takes the form of an inverted 'S', and the lighthouse is connected to the rest of Finland only by a short stretch of land. The border is regularly resurveyed every 25 years by officials representing both countries. The last such joint inspection took place in August 2006.[4]

The lighthouse is in urgent need of maintenance, and a Finnish interest group is trying to raise funds for its preservation. The lighthouse has been automatic since 1979 and the surrounding buildings are no longer used. The increasing general availability of GPS has made its primary function redundant.

Radio amateurs and CB operators around the world consider the Finnish part of Market Reef (as they call it) a separate entity, distinct from Finland and Sweden. The Finnish part of Market Reef used to be one of the world's most desired "countries" among radio amateurs due to its special status and relative remoteness. Usually there are one or more Amateur Radio expeditions to the island every year, weather permitting. During these expeditions tens of thousands of radio contacts are made with people in several parts of the world. At high seas, landing is only possible with a helicopter. Good pictures of Märket are shown on QSL cards. The official prefix for use on the Finnish side is OH0, as in the rest of the Åland Islands, but OJ0 is the optional call sign prefix for Market Reef. There is a fee for using an OJ0 call sign, while the use of the OH0/ prefix in front of the own call sign is free.[citation needed] All radio activity on the island is by visitors on DX-peditions. When the Finnish part of the reef was given its special status in amateur radio, in the late 1960s the lighthouse keeper himself became a licenced Amateur Radio operator who initially used the call OH0MA. On the Swedish side of Market Reef the callsigns 8S9M and SI8MI have been used.[5]

Märket has a continental climate affected by oceanic influences; it has a reputation for being one of the windiest places in Finland.[6] A meteorological station has been managed by the lighthouse keepers since 1896 and an automatic station was inaugurated on the November 10, 1977 a short while after its automation.[7]

The effect of the sea is very important to the climate of the island: thermal inertia dramatically reduces the temperature fluctuations during the year compared to the continent and to a lesser extent compared to the central part of Fasta Åland, the largest island of the archipelago of Åland. Märket holds five records for daytime temperatures for weather stations in Finland, all in the period between November 29 and January 1, with 10.2°C (50.4°F) on December 15, 2006 and 8.8°C (47.8°F) on December 31, 1975.[8] The average yearly temperature is roughly 6°C (43°F) and is one of the in highest in Finland, with the month of January being milder than on the continent (-2.5°C or 28°F on average), and a warm summer (15.9°C or 61°F on average in July)[9]. The island is drier than the mainland: the average rainfall does not usually surpass 550mm (21.7 in).[10]