Anno Domini (abbreviated as AD or A.D.) and Before Christ (abbreviated as BC or B.C.) are designations used to label or number years used with the Julian and Gregorian calendars. This calendar era is based on the traditionally reckoned year of the conception or birth of Jesus of Nazareth, with AD counting years after the start of this epoch, and BC denoting years before the start of the epoch. Alternatively, the secular abbreviations CE and BCE are used, respectively. There is no year zero in this scheme, so the year AD 1 immediately follows the year 1 BC. This dating system was devised in 525, but was not widely used until after 800.[1]

The Gregorian calendar is the most widely used calendar in the world today. For decades, it has been the unofficial global standard, adopted for pragmatic interests of international communication, transportation and commercial integration and recognized by international institutions such as the United Nations and the Universal Postal Union.[2]

Traditionally, English has copied Latin usage by placing the abbreviation before the year number for AD.[6] Since BC is not derived from Latin it is placed after the year number (for example: 68 BC, but AD 2011). However, placing the AD after the year number (as in "2011 AD") is also becoming common usage. The abbreviation is also widely used after the number of a century or millennium, as in "fourth century AD" or "second millennium AD" (although conservative usage formerly rejected such expressions).[7] Because BC is the English abbreviation for Before Christ, it is sometimes incorrectly concluded that AD means After Death, i.e., after the death of Jesus. If that were true, the thirty-three or so years of his life would not be in any era.[8] 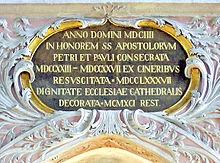 The Anno Domini dating system was devised in 525 by Dionysius Exiguus to enumerate the years in his Easter table. His system was to replace the Diocletian era that had been used in an old Easter table because he did not wish to continue the memory of a tyrant who persecuted Christians. The last year of the old table, Diocletian 247, was immediately followed by the first year of his table, AD 532. When he devised his table, Julian calendar years were identified by naming the consuls who held office that year—he himself stated that the "present year" was "the consulship of Probus Junior", which was 525 years "since the incarnation of our Lord Jesus Christ".[9] Thus Dionysius implied that Jesus' Incarnation occurred 525 years earlier, without stating the specific year during which his birth or conception occurred.

"However, nowhere in his exposition of his table does Dionysius relate his epoch to any other dating system, whether consulate, Olympiad, year of the world, or regnal year of Augustus; much less does he explain or justify the underlying date."[10]:778

Blackburn & Holford-Strevens briefly present arguments for 2 BC, 1 BC, or AD 1 as the year Dionysius intended for the Nativity or Incarnation. Among the sources of confusion are:[10]:778–9

The Anglo-Saxon historian the Venerable Bede, who was familiar with the work of Dionysius Exiguus, used Anno Domini dating in his Ecclesiastical History of the English People, finished in 731. In this same history he also used another Latin term, "ante vero incarnationis dominicae tempus" ("the time before the Lord's true incarnation"), equivalent to the English "before Christ", to identify years before the first year of this era,[11] thus establishing the standard of not using a year zero,[12] even though he used zero in his computus. Both Dionysius and Bede regarded Anno Domini as beginning at the incarnation of Jesus, but "the distinction between Incarnation and Nativity was not drawn until the late 9th century, when in some places the Incarnation epoch was identified with Christ's conception, i.e., the Annunciation on March 25" (Annunciation style).[10]:881

On the continent of Europe, Anno Domini was introduced as the era of choice of the Carolingian Renaissance by Alcuin. Its endorsement by Emperor Charlemagne and his successors popularizing the usage of the epoch and spreading it throughout the Carolingian Empire ultimately lies at the core of the system's prevalence. According to the Catholic Encyclopedia, popes continued to date documents according to regnal years for some time, but usage of AD gradually became more common in Roman Catholic countries from the 11th to the 14th centuries.[13] In 1422, Portugal became the last Western European country to switch to the system begun by Dionysius.[14] Eastern Orthodox countries only began to adopt AD instead of the Byzantine calendar in 1700 when Russia did so, with others adopting it in the 19th and 20th centuries.

Even though Anno Domini was in widespread use by the 9th century, Before Christ (or its equivalent) did not become common until much later. Bede used the expression "anno igitur ante incarnationem Dominicam" (before the Incarnation of the Lord) twice. "Anno an xpi nativitate" (before the birth of Christ) is found in 1474 in a work by a German monk.[15] In 1627, the French Jesuit theologian Denis Pétau (Dionysius Petavius in Latin), with his work De doctrina temporum, popularized the usage ante Christum (Latin for "Before Christ") to mark years prior to AD.[16][17][18]

When the reckoning from Jesus' incarnation started replacing the previous dating systems in western Europe, different people chose different Christian feast days to begin the year: Christmas, Annunciation, or Easter. Thus, depending on the time and place, year number changed on different days, which created slightly different styles in chronology:[19]

See also: Nativity of Jesus and Chronology of Jesus

According to Doggett, "Although scholars generally believe that Christ was born some years before AD 1, the historical evidence is too sketchy to allow a definitive dating".[21] According to Matthew 2:1[22] King Herod the Great was alive when Jesus was born, and Matthew 2:16,[23] says Herod ordered the Massacre of the Innocents in response to Jesus' birth. Blackburn and Holford-Strevens fix King Herod's death shortly before Passover in 4 BC[10]:770, and say that those who accept the story of the Massacre of the Innocents sometimes associate the star that led the Biblical Magi with the planetary conjunction of 15 September 7 BC or Halley's comet of 12 BC (less likely since comets were usually considered bad omens); even historians who do not accept the Massacre accept the birth under Herod as a tradition older than the written gospels.[10]:776

The Gospel of Luke states that Jesus was conceived during the reign of Herod the Great[Luke 1:5] (i.e., before 4 BC) while also stating that Jesus was born when Cyrenius (or Quirinius) was the governor of Syria and carried out the census of the Roman provinces of Syria and Iudaea.[Luke 2:1-3] The Jewish historian Josephus, in his Antiquities of the Jews (ca. AD 93), indicates that Cyrenius/Quirinius' governorship of Syria began in AD 6, and that the census occurred sometime between AD 6—7,[24] which is incompatible with a conception prior to 4 BC. On this point, Blackburn and Holford-Strevens state that "St. Luke raises greater difficulty ... Most critics therefore discard Luke".

During the first six centuries of what would come to be known as the Christian era, European countries used various systems to count years. Systems in use included consular dating, imperial regnal year dating, and Creation dating.

Although the last non-imperial consul, Basilius, was appointed in 541 by Emperor Justinian I, later emperors through Constans II (641–668) were appointed consuls on the first 1 January after their accession. All of these emperors, except Justinian, used imperial post-consular years for all of the years of their reign alongside their regnal years.[27] Long unused, this practice was not formally abolished until Novell XCIV of the law code of Leo VI did so in 888.

Another calculation had been developed by the Alexandrian monk Annianus around the year AD 400, placing the Annunciation on 25 March AD 9 (Julian)—eight to ten years after the date that Dionysius was to imply. Although this Incarnation was popular during the early centuries of the Byzantine Empire, years numbered from it, an Era of Incarnation, were only used, and are still only used, in Ethiopia, accounting for the eight- or seven-year discrepancy between the Gregorian and the Ethiopian calendars. Byzantine chroniclers like Maximus the Confessor, George Syncellus, and Theophanes dated their years from Annianus' creation of the World. This era, called Anno Mundi, "year of the world" (abbreviated AM), by modern scholars, began its first year on 25 March 5492 BC. Later Byzantine chroniclers used Anno Mundi years from 1 September 5509 BC, the Byzantine Era. No single Anno Mundi epoch was dominant throughout the Christian world. Eusebius of Caesarea in his Chronicle used an era beginning with the birth of Abraham, dated in 2016 BC (AD 1 = 2017 Anno Abrahami).[28]

Spain and Portugal continued to date by the Era of the Caesars or Spanish Era, which began counting from 38 BC, well into the Middle Ages. In 1422, Portugal became the last Catholic country to adopt the Anno Domini system.[13]

The Era of Martyrs, which numbered years from the accession of Diocletian in 284, who launched the last yet most severe persecution of Christians, was used by the Church of Alexandria, and is still used officially by the Coptic church. It also used to be used by the Ethiopian[disambiguation needed

] church. Another system was to date from the crucifixion of Jesus Christ, which as early as Hippolytus and Tertullian was believed to have occurred in the consulate of the Gemini (AD 29), which appears in the occasional medieval manuscript.

Anno Domini is sometimes referred to as the Common Era, Christian Era, or Current Era (abbreviated as C.E. or CE). CE is often preferred by those who desire a term not explicitly related to Christian conceptions of time.[29][30] For example, Cunningham and Starr (1998) write that "B.C.E./C.E. …do not presuppose faith in Christ and hence are more appropriate for interfaith dialog than the conventional B.C./A.D." Upon its foundation, the Republic of China adopted the Minguo Era, but used the Western calendar for international purposes. The translated term was 西元 ("Western Era"). Later, in 1949, the People's Republic of China abandoned the Chinese calendar completely and adopted 公元 (gōngyuán, "Common Era") for all purposes domestic or foreign.

In the AD year numbering system, whether applied to the Julian or Gregorian calendars, AD 1 is preceded by 1 BC. There is no year "0" between them. Because of this, most experts agree that a new century begins in a year with the last digits being "01" (1801, 1901, 2001); new millennia likewise began in 1001 and 2001. A common misconception is that centuries and millennia begin when the trailing digits are zeroes (1800, 1900, 2000, etc.);[1] moreover, this convention was widely used to celebrate the new millennium in the year 2000. For computational reasons astronomical year numbering and the ISO 8601 standard designate years so that AD 1 = year 1, 1 BC = year 0, 2 BC = year −1, etc.[31] In common use, ancient dates are expressed in the Julian calendar, but ISO 8601 uses the Gregorian calendar and astronomers may use a variety of time scales depending on the application. Thus dates using the year 0 or negative years may require further investigation before being converted to BC or AD.

Use of "Common Era"

Some have asserted that using the phrase "Year of our Lord"[32][33] or basing the world's dating system on the life of Jesus are forms of bias towards the Christian religion.[34]

Attempts to use the more secular year designations BCE (Before the Common Era) and CE (Common Era) have also stirred debate in some countries.[clarification needed][35][36]

The following are proposed reforms of the Gregorian calendar: