In grammar, the case of a noun or pronoun is an inflectional form that indicates its grammatical function in a phrase, clause, or sentence. For example, a pronoun may play the role of subject ("I kicked the ball"), of direct object ("John kicked me"), or of possessor ("It is my ball"). Languages such as Ancient Greek, Latin, and Sanskrit had ways of altering or inflecting nouns to mark roles which are not specially marked in English, such as the ablative case ("John kicked the ball away from the house") and the instrumental case ("John kicked the ball with his foot"). In Ancient Greek those last three words would be rendered tōi podi (τῷ ποδί), with the noun pous (πούς, foot) changing to podi to reflect the fact that John is using his foot as an instrument (any adjective modifying "foot" would also change case to match). As a language evolves, cases can merge (for instance in Ancient Greek genitive and ablative have merged as genitive), a phenomenon formally called syncretism.[1]

Usually a language is said to "have cases" only if nouns change their form (decline) to reflect their case in this way. Other languages perform the same function in different ways. English, for example, uses prepositions like "of" or "with" in front of a noun to indicate functions which in Ancient Greek or Latin would be indicated by changing (declining) the ending of the noun itself.

More formally, case has been defined as "a system of marking dependent nouns for the type of relationship they bear to their heads."[2]:p.1 Cases should be distinguished from thematic roles such as agent and patient. They are often closely related, and in languages such as Latin several thematic roles have an associated case, but cases are a morphological notion, while thematic roles are a semantic one. Languages having cases often exhibit free word order, since thematic roles are not dependent on position in a sentence.

In many European languages, the word for "case" is cognate to the English word, all stemming from the Latin casus, related to the verb cadere, "to fall", with the sense that all other cases have fallen away from the nominative. Its proto-Indo-European root is *k^ad-1.

Similarly, the word for "declension" and its many European cognates, including its Latin source declinatio come from the root *k^lei-, "to lean". 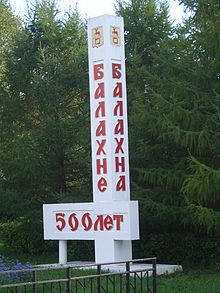 On this sign in Russian memorializing an anniversary of the city of Balakhna, the word Balakhna on the right is in the nominative case, while the word Balakhne is in the dative case in Balakhne 500 Let ('Balakhna is 500 years old') on the front of the sign. Meanwhile let is in the genitive (plural) case.

While not very prominent in modern English, cases featured much more saliently in Old English and other ancient Indo-European languages, such as Latin, Ancient Greek, and Sanskrit. Historically, the Indo-European languages had eight morphological cases, though modern languages typically have fewer, using prepositions and word order to convey information that had previously been conveyed using distinct noun forms. Among modern languages, cases still feature prominently in most of the Balto-Slavic languages, with most having six to eight cases, as well as German and Modern Greek, which have four.[3] In German, cases are mostly marked on articles and adjectives, and less so on nouns.

All of the above are just rough descriptions; the precise distinctions vary from language to language, and are often quite complex. Case is based fundamentally on changes to the noun to indicate the noun's role in the sentence. This is not how English works, where word order and prepositions are used to achieve this.

Modern English has largely abandoned the inflectional case system of Indo-European in favor of analytic constructions. The personal pronouns of Modern English retain morphological case more strongly than any other word class (a remnant of the more extensive case system of Old English). For other pronouns, and all nouns, adjectives, and articles, grammatical function is indicated only by word order, by prepositions, and by the genitive clitic -'s.

Taken as a whole, English personal pronouns are typically said to have three morphological cases:

Most English personal pronouns have five forms; in addition to the nominative and objective case forms, the possessive case has both a determiner form (such as my, our) and a distinct independent form (such as mine, ours) (with the exceptions that these are not distinct for the third person singular masculine (his car, it is his) and that the third person singular neuter it does not have the possessive independent form); and they have a distinct reflexive or intensive form (such as myself, ourselves). The interrogative personal pronoun who, however, lacks both an independent possessive form and a reflexive/intensive form, but it does have an indefinite form with two variants (whoever / whosoever).

Though English pronouns can have subject and object forms (he/him, she/her), nouns show only a singular/plural and a possessive/non-possessive distinction (e.g., chair, chairs, chair's, chairs'). Note that chair does not change form between "the chair is here" (subject) and "I saw the chair" (direct object), a distinction made by word order and context.

Cases can be ranked in the following hierarchy, in which languages tend not to have any case to the right of one they do not have:[2]:p.89

In the most common[2] case concord system, only the final word (the noun) in a phrase is marked for case. This system appears in Turkic languages, Mongolian, Quechua, Dravidian languages, many Papuan languages, Indo-Aryan languages, and others. In Basque and various Amazonian and Australian languages, only the phrase-final word (not necessarily the noun) is marked for case. In Hungarian and many Indo-European, Balto-Finnic, and Semitic languages, case is marked on the noun, the determiner, and usually the adjective. Other systems are less common. In some languages, there is double-marking of a word as both genitive (to indicate semantic role) and another case such as accusative (to establish concord with the head noun).

In Indo-European languages, declension patterns may depend on a variety of factors, such as gender, number, phonological environment, and irregular historical factors. Pronouns sometimes have separate paradigms. In some languages, particularly Slavic languages, a case may contain different groups of endings depending on whether the word is a noun or an adjective. A single case may contain many different endings, some of which may even be derived from different roots. For example, in Polish, the genitive case has -a, -u, -ów, -i/-y, -e- for nouns, and -ego, -ej, -ich/-ych for adjectives. To a lesser extent, a noun's animacy or humanness may add another layer of complication.

An example of a Latin case inflection is given below, using the singular forms of the Latin term for "sailor," which belongs to Latin's first declension class.

Grammatical case was analyzed extensively in Sanskrit. The grammarian Pāṇini identified six semantic roles or karaka, which are related to the seven Sanskrit cases (nominative, accusative, instrumental, dative, ablative, genitive, and locative),[5] but not in a one-to-one way. The six karaka are:[6]

For example, consider the following sentence:

Here leaf is the agent, tree is the source, and ground is the locus, the corresponding declensions are reflected in the morphemes -am -at and -au respectively.

The Tamil case system is analyzed in native and missionary grammars as consisting of a finite number of cases.[7][8] The usual treatment of Tamil case (Arden 1942)[9] is one where there are seven cases—the nominative (first case), accusative (second case), instrumental (third), dative (fourth), ablative (fifth), genitive (sixth), and locative (seventh). In traditional analyses there is always a clear distinction made between postpositional morphemes and case endings. The vocative is sometimes given a place in the case system as an eighth case, although vocative forms do not participate in usual morphophonemic alternations, nor do they govern the use of any postpositions.

As languages evolve, case systems change. In Ancient Greek, for example, the genitive and ablative cases became combined, giving five cases, rather than the six retained in Latin. In modern Hindi, the Sanskrit cases have been reduced to two: a direct case (for subjects and direct objects) and an oblique case.[10] In English, apart from the pronouns discussed above, case has vanished altogether except for the possessive/non-possessive dichotomy in nouns.

The evolution of the treatment of case relationships can be circular.[2]:pp.167-174 Adpositions can become unstressed and sound like they are an unstressed syllable of a neighboring word. A postposition can thus merge into the stem of a head noun, developing various forms depending on the phonological shape of the stem. Affixes can then be subject to various phonological processes such as assimilation, vowel centering to the schwa, phoneme loss, and fusion, and these processes can reduce or even eliminate the distinctions between cases. Languages can then compensate for the resulting loss of function by creating adpositions, thus coming full circle.

Languages are categorized into several case systems, based on their morphosyntactic alignment — how they group verb agents and patients into cases:

The following are systems that some languages use to mark case instead of, or in addition to, declension:

Some languages have very many cases; for example, a Northeast Caucasian language, Tsez can be analyzed as having 128 - 64 for singular and 64 for plural, with a few exceptions.

With a few exceptions, most languages in the Finno-Ugric group make extensive use of cases. Finnish has 15 cases according to the traditional understanding (or up to 30 depending on the interpretation).[11] However, only 10 are commonly used in speech (see Finnish noun cases). Estonian has 14 and Hungarian has 18.

John Quijada's constructed language Ithkuil has 81 noun cases, and its descendent Ilaksh has a total of 96 noun cases.[12][13]

The lemma form of words, which is the form chosen by convention as the canonical form of a word, is usually the most unmarked or basic case, which is typically the nominative, trigger, or absolutive case, whichever a language may have.