Historical flag of Moravia (from 1848) 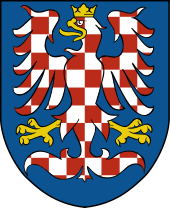 Coat of Arms of Moravia

Mähren (help·info); Polish: Morawy; Latin: Moravia) is a historical region in Central Europe in the east of the Czech Republic, and one of the former Czech lands, together with Bohemia and Silesia. It takes its name from the Morava River which rises in the northwest of the region. Moravia's largest city is Brno, its historical capital.

Moravia occupies most of the eastern part of the Czech Republic including the South Moravian Region and the Zlín Region, as well as parts of the Moravian-Silesian, Olomouc, Pardubice, Vysočina and South Bohemian regions.

Moravia borders Poland in the north, Czech Silesia in the east, Slovakia in the southeast, Lower Austria in the south and Bohemia in the west. Its northern boundary is formed by the Sudetes mountains which become the Carpathians in the east. The meandering Dyje flows through the border country with Austria and there is a protected area on both sides of the border in the area around Hardegg.

At the heart of the country lie the sedimentary basins of the Morava and the Dyje at a height of 180 to 250 m. In the west, the Bohemian-Moravian highlands rise to over 800 m, although the highest mountain is in the north-west, Praděd in Hrubý Jeseník at 1490 m. Further south lie the Jeseníky lowlands (400 to 600 m) which fall to 310 m at the upper reaches of the River Oder (the Moravian Gate) near Hranice and then rise again as the Beskids to the 1322 m high Lysá hora. These three mountain ranges plus the "gate" between the latter two form part of the European Watershed. Moravia's eastern boundary is formed by the White Carpathians and Javorníky.

Between 1782–1850, Moravia (also thus known as Moravia-Silesia) also included a small portion of the former province of Silesia – the Austrian Silesia (when Frederick the Great annexed most of ancient Silesia (the land of upper and middle Oder river) to Prussia, Silesia's southernmost part remained with the Habsburgs).

In the south around Hodonín and Břeclav the land is part of the Viennese Basin and petroleum and lignite are drilled for in its deeper sediments. In the area around Ostrava there was intensive coal mining until around 1995. Iron, chemicals, leather and building materials are the main industrial goods. The main economic centres are Brno, Olomouc, Zlín and Ostrava. As well as other agriculture, Moravia is noted for its viticulture; it contains 94% of the Czech Republic's vineyards and is at the centre of the country's wine industry. 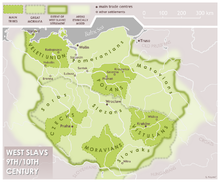 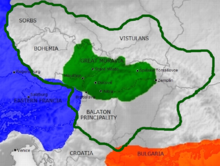 Territory of the Great Moravia in 9th century: area ruled by Rastislav (846–870) in green; the green line marks the greatest territorial extent during the reign of Svatopluk I (871–894)

Around 60 BC the Celtic Volcae people withdrew from the region and were succeeded in turn by the Germanic Quadi. Several hundred years later, in the sixth century AD the Slavic tribes arrived in this territory often crossed during the Migration Period by successive Germanic and major Slavic tribes. At the end of the eighth century the Moravian Principality came into being in present-day south-eastern Moravia, Záhorie in south-western Slovakia and parts of Lower Austria. In 833 A.D. this became the state of Great Moravia with the conquest of the Principality of Nitra (present-day Slovakia). Their first king was Mojmír I (ruled 830-846). Louis the German invaded Moravia and replaced Mojmír I with his nephew Rastiz who became St. Rastislav.[1] St. Rastislav (846-870) tried to emancipate his land from the Carolingian influence, so he sent envoys to Rome to get missionaries to come. When Rome refused he turned to Constantinople to the Byzantine emperor Michal. The result was the mission of Saints Cyril and Methodius who translated liturgical books into Slavonic, which had lately been elevated by the Pope to the same level as Latin and Greek. Methodius became the first Moravian archbishop, but after his death the German influence again prevailed and the disciples of Methodius were forced to flee. So the unique situation which anticipated the II. Vatican Council by several centuries was destroyed. Great Moravia reached its greatest territorial extent in the 890s under Svatopluk I. At this time, the empire encompassed the territory of the present-day Czech Republic and Slovakia, the western part of present Hungary (Pannonia), as well as Lusatia in present-day Germany and Silesia and the upper Vistula basin in southern Poland. After Svatopluk's death in 895, the Bohemian princes defected to become vassals of the East Frankish ruler Arnulf of Carinthia, and the Moravian state ceased to exist after being overrun by invading Magyars in 906/7.

Main articles: Duchy of Bohemia and Kingdom of Bohemia

Following the defeat of the Magyars by Emperor Otto I at the Battle of Lechfeld in 955, Otto's ally Boleslaus I, the Přemyslid ruler of Bohemia, received Moravia. Boleslaus I of Poland annexed Moravia in 999, and ruled it until 1019,[2] when the Přemyslid prince Bretislaus recaptured it. Since then, Moravia has shared its history with Bohemia. Upon his father's death in 1034, Bretislaus also became the ruler of Bohemia. In 1055, Bretislaus decreed that the Bohemia and Moravia would be inherited together by primogeniture, although he also provided that his younger sons should govern parts (quarters) of Moravia as vassals to his oldest son.

Throughout the Přemyslid era, junior princes often ruled all or part of Moravia from Olomouc, Brno or Znojmo, with varying degrees of autonomy from the ruler of Bohemia. (Mainly Dukes of Olomouc usually used to act as "right hand" of Prague dukes and kings. Dukes of Brno and especially those of Znojmo were much more insubordinate.) Moravia reached its height of autonomy in 1182, when Emperor Frederick I elevated Conrad II Otto of Znojmo to the status of a margrave,[3] immediately subject to the emperor, independent of Bohemia. This status was short-lived: in 1186, Conrad Otto was forced to obey the supreme rule of Bohemian duke Frederick. Three years later, Conrad Otto succeed to Frederick as Duke of Bohemia and subsequently cancelled his margrave title. Nevertheless, the margrave title was restored in 1197 when Vladislaus III of Bohemia resolved the succession dispute between him and his brother Ottokar by abdicating from the Bohemian throne and accepting Moravia as a vassal land of Bohemian (i.e., Prague) rulers. Vladislaus gradually established this land as Margraviate, slightly administratively different from Bohemia.

The Přemyslid dynasty became extinct in 1306, and in 1310 John of Luxembourg became king of Bohemia. Moravia and Bohemia remained within the Luxembourg dynasty of Holy Roman kings and emperors (except during the Hussite wars), until inherited by Albert II of Habsburg in 1437.

After his death followed the interregnum till 1453; land (as the rest of lands of the Bohemian Crown) was administered by the landfriedens (landfrýdy). The rule of young Ladislaus the Posthumous subsisted only less than five years and subsequently (1458) the Hussite George of Poděbrady was elected as the king. He again reunited all Czech lands (then Bohemia, Moravia, Silesia, Upper & Lower Lusatia) into one-man ruled state. In 1466, Pope Paul II excommunicated George and forbade all Catholics (i.e. circa 15 % of population) from continuing to serve him. The Hungarian crusade followed and in 1469 Matthias Corvinus conquered Moravia and proclaimed himself (with assistance of rebelling Czech nobility) as the king of Bohemia.

The subsequent 21-year period of a divided kingdom was decisive for the rising awareness of a specific Moravian identity, distinct from that of Bohemia. Although Moravia was reunited with Bohemia in 1490 when Vladislaus Jagiellon, king of Bohemia, also became king of Hungary, some attachment to Moravian "freedoms" and resistance to government by Prague continued until the end of independence in 1620. In 1526, Vladislaus' son Louis died in battle and the Habsburg Ferdinand I was elected as his successor.

The epoch 1526–1620 was marked by increasing animosity between Catholic Habsburg kings (emperors) and rather Protestant Moravian (and other Crowns') estates. Moravia, like Bohemia, remained as a Habsburg possession until the end of World War I. In 1573 the Jesuit University of Olomouc was established. The establishment of a special papal seminary Collegium Nordicum made the university a centre of re-Catholisation effort in Central and Northern Europe, with the second largest group of students being from Scandinavia. Until 1641 Moravia's capital was the centrally-located Olomouc, but after its capture by the Swedes it moved to the city of Brno which resisted the invaders successfully. The Margraviate of Moravia had (from 1348 in Olomouc) its own Diet (parliament) – zemský sněm (Landtag in German), whose deputies were elected (from 1905 onward) in ethnically separate German and Czech constituencies. In 1758 Moravia was invaded by Prussian forces under Frederick the Great who laid siege to Olomouc before he was forced to withdraw following the Battle of Domstadtl. 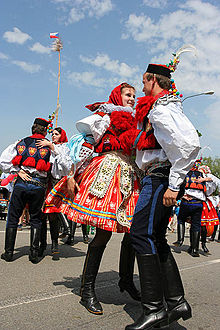 Moravia historically had a huge minority of ethnic Germans, although they were largely expelled after World War II.

Notable people from Moravia include: