The Battle of Domstadtl, also spelled Domstadt, Czech Domašov, was a between and at a Moravian village during the on , preceded by a minor clash at (Gundersdorf) on . Austrians under the command of Major General Ernst Gideon von Laudon and Major General Joseph von Siskovits attacked and destroyed a supply bound for the Prussian army besieging (Olmütz). The Austrian victory saved the city and the Prussian King was forced to leave .

Frederick the Great invaded Moravia in the beginning of May and besieged the fortified city of . He hoped that the Austrian army would come to help the fortress and the Prussians would defeat them in a big battle on the place of their choice. If not, he would conquer the fortress in a short time and use it as a base for defending and increasing pressure on .

Austrian Leopold Joseph von Daun knew the strength of the Prussian army and kept avoiding the final clash. Instead the Austrians preferred blocking the ways for transporting supplies for the Prussians and causing them damage in minor skirmishes. Defenders of the Olomouc fortress also struggled bravely and it held much longer than Frederick had expected. Although in June it was on the edge of being taken, with the s destroyed by s on two places, the Prussians desperately needed new supplies to be able to continue the fight.

Frederick was afraid that a lot of small convoys protected by small forces could be easily captured by the Austrians and therefore decided that one huge convoy guarded by strong troops should be sent. The supplies for the convoy were collected in and at the end of June it arrived in the territory of Moravia.

The convoy was so big that there was no chance it could be kept in secret. It contained about 4,000 s loaded with military and accompanied by about 2,500 head of cattle. As it set out on its way, it stretched 45 km long.

The convoy was protected by 10,870 s, commanded by Colonel Wilhelm von Mosel. The strongest part was probably consisting of 1,341 men; further he had eight s created from new recruits or healed veterans.

As soon as Field Marshal Daun learnt about the convoy, he decided it had to be stopped and destroyed. The task was given to Ernst Gideon von Laudon and Joseph von Siskovits.

Laudon awaited the enemy at Guntramovice, a small village in northern Moravia. Siskovits, who lost his way in woods, was supposed to come in two days. This was quite a problem for Laudon, because his four infantry battalions, a of s, a regiment of s, an and a troop of frontier guards had only about 6,000 men. Despite that he decided to attack the Prussians because Olomouc was near and there was no time for waiting. He also knew that five battalions of 20,000 Prussian soldiers commanded by Lieutenant-General were rushing towards the convoy to help Mosel.

The convoy arrived on 28 June early in the morning. The Austrians started shooting at the front wagons. One Prussian battalion forged ahead in order to find out the strength of the enemy, but they were routed by the Austrian artillery. The Prussians also formed artillery batteries on their side of the road and started shooting. They tried to attack the Austrian positions in the hilly terrain several times, but they were always forced back. The fight took about five hours but finally the Prussians started to dominate the battleground and Laudon ordered his men to retreat towards , which they did without any problems, because Mosel did not have enough cavalry to chase them.

Although Laudon was defeated and did not manage to destroy the convoy, his losses were smaller than the Prussian ones. However, the most precious thing that he gained was time. Nowadays some s point out that the Prussians had a chance to succeed if they had sacrificed some of the dispersed wagons and immediately rushed to Olomouc. However, neither Mosel nor Zieten, who reached the convoy several hours after the clash, knew about Siskovits' approaching forces, and therefore they decided to devote some time to rearranging the convoy and repairing some damages. They continued on 30 June early in the morning. 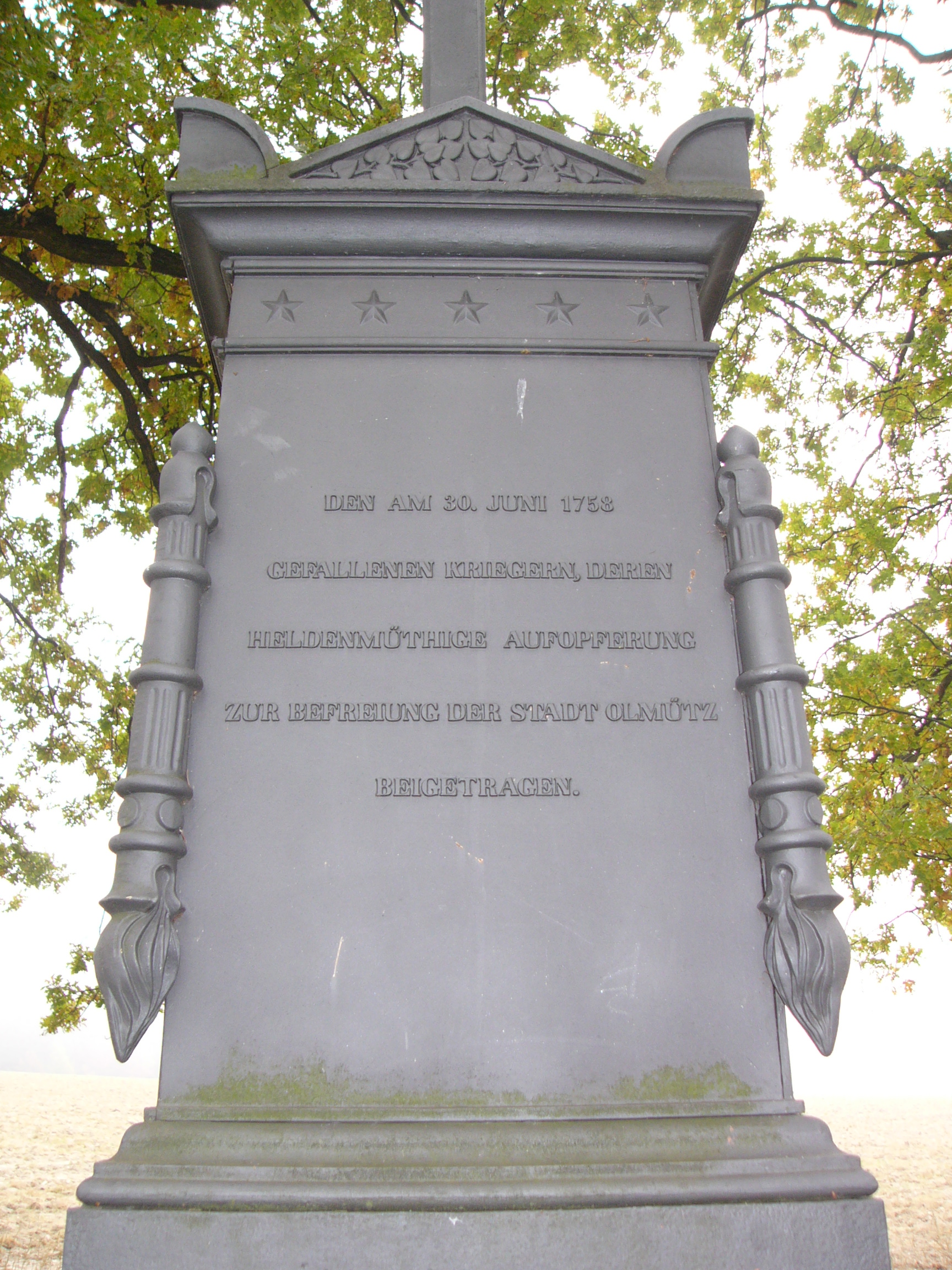 right|thumb|Writing on the memorial in German language:">

Meanwhile the Austrians prepared for a new attack. They chose an open place between Domašov nad Bystřicí and , which is surrounded by hills and woods, ideal for an .

Siskovits’ troops came on the scene first and waited for the enemy in the woods on the left side of the road. Laudon was supposed to come from Moravský Beroun later, in the middle of the fight, and attack from the opposite side, thus increasing the chaos among the Prussian soldiers.

First the vanguard consisting of 4,850 soldiers and 250 wagons arrived, but Siskovits let them go. Austrian artillery started the fight when the main body of the convoy was passing by, which made an enormous chaos among the wagons. Siskovits’ infantry was fighting successfully with Prussian soldiers despite the fact that they were outnumbered 3 to 1. And when Laudon’s troops appeared from the other side the result of the battle was determined. After 7 hours of fight the Prussian convoy was routed.

Although the total number of fighting Austrian soldiers was approximately 12,000, they lost (at Guntramovice and Domašov together) only about 600 of them. The Prussian casualties were much higher, although different sources give different numbers. Austrians claimed about 2,000 killed, injured or missing soldiers and 1,450 captured (including General Puttkamer and 40 other officers), while Prussians reported only 2,701 killed, injured, missing and captured soldiers altogether, but admitted that they found it difficult to count them precisely due to the complete dispersion of their troops after the battle.

The victors also seized 2,200 horses, numerous cattle and a major part of the transported materiel. Because many of the wagons were damaged during the battle, they burned everything they were not able to take away with them. Some of the ammunition wagons were blown up as a part of the victory celebrations. An important part of the spoils was 2 million s (according to some sources 1 million), but the Austrian commanders let their soldiers keep half of it and only the residual part reached the state coffers.

Only 250 wagons from the vanguard escaped, but some of them were captured by ian soldiers near , only several kilometers north of Olomouc, and as a result only about 100-200 of them reached their destination.

The importance of the battle is sometimes underestimated. The human casualties on any side were not as high as in other notable battles of that time, but the most important effect was the loss of the supplies for the Prussian army, which significantly influenced Frederick’s opinion on besieging Olomouc. The defeat shocked the Prussian camp and since Daun finally decided to come to help Olomouc, they were forced to finish the siege of the city (the lack of ammunition made its capture impossible anyway) and retreated to . The Battle of Guntramovice and Domašov was the turning point in the fight for Moravia.

A memorial called "Black Cross" was built to the north-east of Domašov in 1858 on the occasion of the 100th anniversary of the battle. There is also a memorial to the soldiers killed in the battle to the south-east of Guntramovice.