Croatian Academy of Sciences and Arts

Croatian Academy of Sciences and Arts 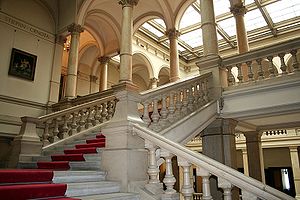 Interior of the Academy Palace

The Croatian Academy of Sciences and Arts (Latin: Academia Scientiarum et Artium Croatica, Croatian: Hrvatska akademija znanosti i umjetnosti, abbrev. HAZU) is the national academy of Croatia. It was founded in 1866 as the Yugoslav Academy of Sciences and Arts (Jugoslavenska akademija znanosti i umjetnosti, abbrev. JAZU), and was known by that name for most of its existence.

The institution was founded in Zagreb in 1866 as the Yugoslav Academy of Sciences and Arts.[4] The bishop and benefactor Josip Juraj Strossmayer, a prominent advocate of higher education during the 19th century Croatian national romanticism, set up a trust fund for this purpose and in 1860 submitted a large donation to the then viceroy (ban) of Croatia Josip Šokčević for the cause of being able to

After some years of deliberations by the Croatian Parliament and the Emperor Franz Joseph, it was finally sanctioned by law in 1866. The official sponsor was Josip Juraj Strossmayer, while the first Chairman of the Academy was the distinguished Croatian historian Franjo Rački.[5] Đuro Daničić was elected for secretary general of the Academy, where he played a key role in preparing the Academy's Dictionary, "Croatian or Serbian Dictionary of JAZU".

The Academy's creation was the logical extension of the University of Zagreb, the institution initially created in 1669 and also renewed by bishop Strossmayer in 1874. Bishop Strossmayer also initiated the building of the Academy Palace in the Zrinjevac park of Zagreb, and the Palace was completed in 1880.[5] In 1884, the Palace also became a host of The Strossmayer Gallery of Old Masters that contained 256 works of art (mostly paintings).[5] The same is today one of the most prominent art galleries in Zagreb.

The Academy briefly changed name from "Yugoslav" to "Croatian" between 1941 and 1945 during the Axis client regime of the Independent State of Croatia.

It was permanently renamed "Croatian" in 1991 after Croatia gained independence from Yugoslavia.

The Academy is divided into nine departments (classes):[6]

See also: List of members of the Croatian Academy of Sciences and Arts

There are four classes of members:[7]

The Academy has recently been criticized to the effect that membership and activities are based on academic cronyism and political favor rather than on scientific and artistic merit. In 2006 matters came to a head with the Academy's refusal to induct Dr. Miroslav Radman, an accomplished biologist, a member of the French Academy of Sciences, and an advocate of a higher degree of meritocracy and accountability in Croatian academia. His supporters within the Academy and the media decried the decision as reinforcing a politically-motivated, unproductive status quo.

Dr. Ivo Banac, a Yale University professor and then a deputy in the Croatian parliament, addressed the chamber in a speech decrying a "dictatorship of mediocrity" in the Academy, while Globus columnist Boris Dežulović satirized the institution as an "Academy of stupidity and obedience." Dr. Vladimir Paar and others defended the Academy's decision, averring that it did take pains to include accomplished scientists but that, since Dr. Radman's work has mostly taken place outside Croatia, it was appropriate that he remain a Corresponding rather than a Full Member of the Academy[8]

Ivan Đikić, an accomplished Croatian scientist, working at the Goethe University Frankfurt, and as of 2010 a member of the German Academy of Sciences Leopoldina, had previously not been able to join HAZU even as an associate member.[9] Nenad Ban, a distinguished molecular biologist from ETH Zurich, is another member of Leopoldina who has not been admitted to HAZU.[10]