National Academy of Sciences of Belarus

National Academy of Sciences of Belarus 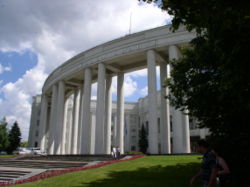 During the World War II the Academy was evacuated to Russia and other Soviet republics. Huge damage was brought to the Academy's material state.

Right after war's end, eight institutes started their activity again. By 1951 the Academy had 29 subdivisions, 1234 staff including 33 academicians. The Academy was supported by the governments of Belarus and the USSR as well as by leading scientific centres in Moscow, Leningrad and other Soviet cities.

After the dissolution of the Soviet Union the scope of the academic research and the structure of the academy had undergone significant changes, with more emphasis on applied problems, under the immediate supervision of Alexander Lukashenko in accordance with the Law No.159-3 of May 5, 1998 "On the National Academy of Sciences of Belarus" and Decree of the President of Belarus No.390 of August 4, 1998 "On Additional Measures on Realization by the National Academy of Sciences of Belarus of the Status of Higher State Scientific Organization".

The scientific-application centers (Научно-практические центры, Scientific and Practical Centers) were introduced by Lukashenko's decree in 2006.[1] Their emphasis is the problems of vital interest for the economical development of the country. The first centers of this kind created in 2006 specialize in agriculture. Later in 2006 an e-commerce