The orthography of Macedonian includes an alphabet (Macedonian: Македонска азбука, Makedonska azbuka), which is an adaptation of the Cyrillic script, as well as language-specific conventions of spelling and punctuation.

The Macedonian alphabet was standardized in 1944 by a committee formed in the Socialist Republic of Macedonia (then part of the federation of Yugoslavia) after the liberation from the Nazis in World War II. The alphabet was similar to, and influenced by, the Serbian Cyrillic alphabet, and used the same phonemic principles employed by Vuk Karadžić and Krste Petkov Misirkov.

Before standardization, the language had been written in a variety of different versions of Cyrillic by different writers, influenced by Bulgarian, Early Cyrillic or Serbian orthography.

The following table provides the upper and lower case forms of the Macedonian alphabet, along with the IPA value for each letter:

In addition to the standard sounds of the letters Ѓ and Ќ above, in some accents these letters represent /dʑ/ and /tɕ/, respectively.

The above table contains the printed form of the Macedonian alphabet; the cursive script is significantly different, and is illustrated below in lower and upper case (letter order and layout below corresponds to table above).

Macedonian has a number of phonemes not found in neighbouring languages. The committees charged with drafting the Macedonian alphabet decided on phonemic principle with a one-to-one match between letters and distinctive sounds. 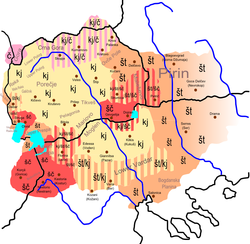 Map of the phoneme kj (Ќ) in the Macedonian language 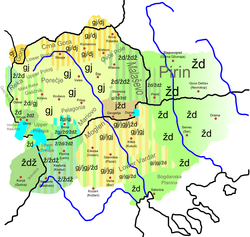 Map of the phoneme gj (Ѓ) in the Macedonian language

In 1887, Temko Popov of the Secret Macedonian Committee used the digraphs гј and кј in his article "Who is guilty?". The following year, the committee published the "Macedonian primer" (written by Kosta Grupče and Naum Evro) which used the Serbian letters Ђ and Ћ for these phonemes.

Despite their forms, Ѓ and Ќ are ordered not after Г and К, but after Д and Т respectively, based on phonetic similarity. This corresponds to the alphabet positions of Serbian Ђ and Ћ respectively. These letters often correspond to Macedonian Ѓ and Ќ in cognates (for example, Macedonian "шеќер" (šeḱer, sugar) is analogous to Serbian/Croatian "шећер/šećer"), but they are phonetically different.

The Cyrillic letter Dze (S s), representing the sound /d͡z/, is based on Dzělo, the eighth letter of the early Cyrillic alphabet. Although a homoglyph to the Latin letter S, the two letters are not directly related. Both the Romanian Cyrillic alphabet and the Russian alphabet also had a letter Ѕ, although Romanian Cyrillic was replaced with a Latin alphabet in the 1860s, and the letter Ѕ was abolished in Russian in the early 18th century.

It should be noted that while Ѕ is generally transcribed as dz, it is a distinct phoneme and is not analogous to ДЗ, which is also used in Macedonian orthography for /d.z/. Ѕ is sometimes described as soft-dz.

Dimitar Mirčev was most likely the first writer to use this letter in print prior to the standardization of 1944.

Prior to standardization, the IPA phoneme /j/ (represented by Ј in the modern Macedonian alphabet) was represented variously as:

Eventually the Ј was selected to represent /j/.

The letters Љ and Њ (/lj/ and /ɲ/) are ultimately from the Serbian Cyrillic alphabet. Historically, Macedonian writers have also used:

The letter Џ (representing the phoneme /dʒ/) was likely adopted from the Serbian alphabet and used by Gjorgjija Pulevski in four of his works, as well as by the Secret Macedonian Committee and Dimitar Mirčev. Misirkov used the digraph ДЖ. The letter Џ is used today.

The accented letters Ѐ and Ѝ are not regarded as separate letters, nor are they accented letters (as in French, for example). Rather, they are the standard letters Е and И topped with an accent when they stand in words that have homographs, so as to differentiate between them (for example, "сè се фаќа" – se se fakja, "all may be touched").

Development of the Macedonian alphabet

Until the modern era, Macedonian was predominantly a spoken language, with no standardized written form of the vernacular dialects. Formal written communication was usually in the Church Slavonic language[1] (in Pirin and Vardar Macedonia) or in Greek (in Greek Macedonia),[1] which were the languages of liturgy, and were therefore considered the 'formal languages'.[2]

The decline of the Ottoman Empire from the mid-19th century coincided with Slavic resistance to the use of Greek in Orthodox churches and schools,[3] and a resistance amongst some Macedonians to the introduction of standard Bulgarian in Vardar Macedonia.[4] However during the period of Bulgarian National Revival many Bulgarians from Macedonia supported the struggle for creation of Bulgarian cultural, educational and religious institutions, including Bulgarian schools that used the version of Cyrillic adopted by other Bulgarians. The majority of the intellectual and political leaders of the Macedonian Bulgarians used this version of the Cyrillic script, which was also changed in the 19th and early 20th century.[5]

The latter half of the 19th century saw increasing literacy and political activity amongst speakers of Macedonian dialects, and an increasing number of documents were written in the dialects. At the time, transcriptions of Macedonian used Cyrillic with adaptations drawing from Old Church Slavonic, Serbian and Bulgarian, depending on the preference of the writer.

Another example is from Bulgarian folklorist from Macedonia Marko Cepenkov who published in two issues of the "A Collection of folklore, science and literature" (1892, 1897) folklore materials from Macedonia.[6] Cepenkov used a version of Bulgarian Cyrillic alphabet with his own adaptations for some of the local Macedonian dialects. He did not use ѣ, using е instead, and did not use the ъ in the final position of masculine nouns. Other adaptations included:

Between the expulsion of the Ottoman Empire from Macedonia in the Balkan Wars of 1912/13, and the liberation of Vardar Macedonia from the Nazis in 1944, Northern Macedonia was divided between Serbia (within the Kingdom of Yugoslavia) and Bulgaria, and standard Serbian and Bulgarian were the official languages. The Serbian and Bulgarian authorities considered Macedonian to be a dialect of Serbian or Bulgarian respectively, and according to some authors proscribed its use[7][8][9][10] (see also History of the Macedonian language). However, in Bulgaria have issued books in Macedonian dialects[11][12] and in 1920s and 1930s in Yugoslavia were published some texts in Macedonian dialects, too.[13][14][15] Greek was used in areas under Greek control.

Standardization of the Macedonian Alphabet

With the liberation of Vardar Macedonia from German–Bulgarian occupation 1944 and the incorporation of the territory into the Socialist Federal Republic of Yugoslavia as the Socialist Republic of Macedonia, the Yugoslav authorities recognized a distinct Macedonian ethnic identity and language. The Anti-Fascist Assembly for the National Liberation of Macedonia (ASNOM, effectively the Macedonian provisional government) formed a committee to standardize the literary Macedonian language and alphabet.

The extent (if any) to which Yugoslav politics overshadowed linguistics in the decisions behind the standardization of the Macedonian language and alphabet will never be fully known.

It is widely assumed by many commentators that there was some political pressure exerted by Yugoslav authorities to ensure that the Macedonian literary language and alphabet were sufficiently dissimilar to Bulgarian to deflect opinions about the Bulgarian character of the Macedonian language.

There were also pragmatic political pressures to adopt an alphabet similar to the Serbian Cyrillic alphabet, which was already an official alphabet of Yugoslavia.

The first committee met from November 27, 1944 to December 4, 1944, and was composed of prominent Macedonian academics and writers (see list below). The committee chose the dialects of Veles, Prilep and Bitola as the basis for the literary language (as Misirkov had in 1903), and proposed a Cyrillic alphabet. The first committee's recommendation was for the alphabet to use

ASNOM rejected the first committee's recommendations, and convened a second committee. Although no official reason was provided, several reasons are supposed for the rejection of the first committee's recommendation, including internal disagreement over the inclusion of Ъ (the Big Yer, as used in Bulgarian), and the view that its inclusion made the alphabet "too close" to the Bulgarian alphabet.

While some Macedonian dialects contain a clear phonemic schwa and used a Bulgarian-style Ъ, according to some opinions the western dialects – on which the literary language is based – do not. Blaže Koneski objected to the inclusion of the Big Yer on the basis that since there was no Big Yer in the literary language (not yet standardized), there was no need for it to be represented in the alphabet. By excluding it from the alphabet, speakers of schwa-dialects would more rapidly adapt to the standard dialect.[17] On the other hand, opponents of Koneski indicatеd that this phoneme is distributed among the western Macedonian dialects too and a letter Ъ should be included in the standardized at that time literary language.[18]

The Second Committee and Adoption

Official government decree enacting the Macedonian alphabet in the Socialist Republic of Macedonia, May 16, 1945. Note the hand-written Ѕ, Ј and Џ in the typewritten line, and the hand-written diacritics added to create Ѓ and Ќ.

With the rejection of the first committee's draft alphabet, ASNOM convened a new committee with five members from the first committee and five new members. On May 3, 1945, the second committee presented its recommendations, which were accepted by the Communist Party of Yugoslavia that same day, and published in Nova Makedonija, the official newspaper.

The committee's recommendations were:

The rejection of the Ъ (Big Yer), together with the adoption of four Serbian Cyrillic letters (Ј, Џ, Љ and Њ), led to accusations that the committee was "Serbianizing" Macedonian, while those in favor of including the Big Yer (Ъ) were accused of "Bulgarianizing" Macedonian. Irrespective, the new alphabet was officially adopted in the Socialist Republic of Macedonia on May 16, 1945, and is still used in the Republic of Macedonia and among Macedonian communities around the world.