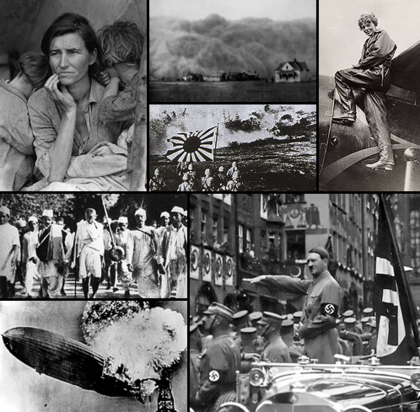 From left, clockwise: Dorothea Lange's photo of the homeless Florence Thompson show the effects of the Great Depression; Due to the economic collapse, the farms become dry and the Dust Bowl spreads through America; The Battle of Wuhan during the Second Sino-Japanese War; Aviator Amelia Earhart becomes a national icon; German dictator Adolf Hitler and the Nazi Party attempted to establish a New Order of absolute Nazi German hegemony in Europe, which culminated in 1939 when Germany invaded Poland, leading to the outbreak of World War II; The Hindenburg explodes over a small New Jerseian airfield, effectively ending commercial airship travel; Mohandas Gandhi walks to the Indian Ocean in the Salt March of 1930.

After the Wall Street Crash of 1929, the largest stock market crash in American history, most of the decade was consumed by an economic downfall called The Great Depression that had a traumatic effect worldwide. In response, authoritarian regimes emerged in several countries in Europe, in particular the Third Reich in Germany. Weaker states such as Ethiopia, China, and Poland were invaded by expansionist world powers, ultimately leading to World War II by the decade's end. The decade also saw a proliferation in new technologies, including intercontinental aviation, radio, and film.

Japanese marines at Guangdong in the Battle of Wuhan in 1938 during the Second Sino-Japanese War.

The rise of Nazism 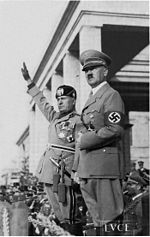 German dictator Adolf Hitler (right) and Italian dictator Benito Mussolini (left) pursue agendas of territorial expansion for their countries in the 1930s, eventually leading to the outbreak of World War II in 1939. 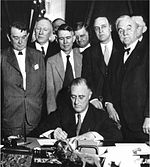 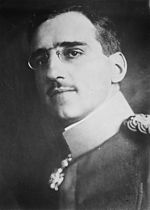 The 1930s were marked by several notable assassinations:

Hertzog of South Africa, whose National Party had won the 1929 election alone, after splitting with the Labour Party, received much of the blame for the devastating economic impact of the depression. 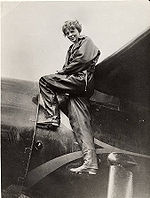 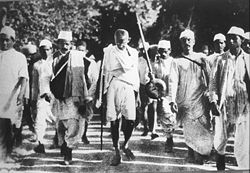 Mohandas Gandhi on the Salt March in 1930.

CCC workers constructing road, 1933. Over 3 million unemployed young men were taken out of the cities and placed into 2600+ work camps managed by the CCC.[7]

Many technological advances occurred in the 1930s, including:

In the art of film making, the Golden Age of Hollywood entered a whole decade, after the advent of talking pictures ("talkies") in 1927 and full-color films in 1930: more than 50 classic films were made in the 1930s: most notable were Gone With The Wind and The Wizard of Oz. 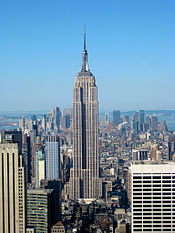 The Empire State Building became the world's tallest building when completed in 1931.

Social Realism became an important art movement during the Great Depression in the United States in the 1930s. Social realism generally portrayed imagery with socio-political meaning. Other related American artistic movements of the 1930s were American scene painting and Regionalism which were generally depictions of rural America, and historical images drawn from American history. Precisionism with its depictions of industrial America was also a popular art movement during the 1930s in the USA. During the Great Depression the art of Photography played an important role in the Social Realist movement. The work of Dorothea Lange, Walker Evans, Margaret Bourke-White, Lewis Hine, Edward Steichen, Gordon Parks, Arthur Rothstein, Marion Post Wolcott, Doris Ulmann, Berenice Abbott, Aaron Siskind, Russell Lee, Ben Shahn (as a photographer) among several others were particularly influential.

The Works Progress Administration part of the Roosevelt Administration's New Deal sponsored the Federal Art Project, the Public Works of Art Project, and the Section of Painting and Sculpture which employed many American artists and helped them to make a living during the Great Depression.

Mexican muralism was a Mexican art movement that took place primarily in the 1930s. The movement stands out historically because of its political undertones, the majority of which of a Marxist nature, or related to a social and political situation of post-revolutionary Mexico. Also in Latin America Symbolism and Magic Realism were important movements.

In Europe during the 1930s and the Great Depression, Surrealism, late Cubism, the Bauhaus, De Stijl, Dada, German Expressionism, Expressionism, Symbolist and modernist painting in various guises characterized the art scene in Paris and elsewhere.

Emperor Hirohito in 1935. He was the last divine Emperor of Japan

Adolf Hitler wins a popular election and then establishes a dictatorship in Germany whose expansionist ambitions lead to the outbreak of World War II in Europe.

Joseph Stalin, General Secretary of the Communist Party of the Soviet Union.

Jesse Owens shook racial stereotypes both with Nazis and segregationists in the USA at the 1936 Berlin Olympics.

See also: History of baseball in the United States

Judy Garland as Dorothy Gale in The Wizard of Oz (1939)

The following articles contain brief timelines which list the most prominent events of the decade: