Bill was born in Winterthur. After an apprenticeship as a silversmith during 1924-1927, Bill took up studies at the Bauhaus in Dessau under many teachers including Wassily Kandinsky, Paul Klee and Oskar Schlemmer from 1927 to 1929, after which he moved to Zurich.

From 1937 onwards he was a prime mover behind the Allianz group of Swiss artists [1] and in 1944, he became a professor at the school of arts in Zurich.

In 1953, Max Bill, Inge Aicher-Scholl and Otl Aicher founded the Ulm School of Design (German: Hochschule für Gestaltung - HfG Ulm) in Ulm, Germany, a design school initially created in the tradition of the Bauhaus and which later developed a new design education approach integrating art and science. The school is notable for its inclusion of semiotics as a field of study. The school closed in 1968. Faculty and students included: Tomás Maldonado, Otl Aicher, Joseph Albers, Johannes Itten, John Lottes, Walter Zeischegg, and Peter Seitz. 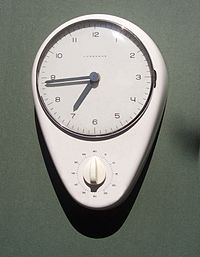 Bill was the single most decisive influence on Swiss graphic design beginning in the 1950s with his theoretical writing and progressive work. [2] His connection to the days of the Modern Movement gave him special authority. As an industrial designer, his work is characterized by a clarity of design and precise proportions.[3] Examples are the elegant clocks and watches designed for Junghans, a long-term client. Among Bill's most notable product designs is the "Ulmer Hocker" of 1954, a stool that can also be used as a shelf element or a side table. Although the stool was a creation of Bill and Ulm school designer Hans Gugelot, it is often called "Bill Hocker" because the first sketch on a cocktail napkin was Bill's work.

As a designer and artist, Bill sought to create forms which visually represent the New Physics mathematics of the early 20th century. He sought to create objects so that the new science of form could be experienced by the senses. [3] A prime example is his sculptural work using the Möbius strip form. [4]

From 1967 to 1971 he became a member of the Swiss National Council, then became a professor at the Staatliche Hochschule für Bildende Künste in Hamburg and chair of Environmental Design from 1967 to 1974. 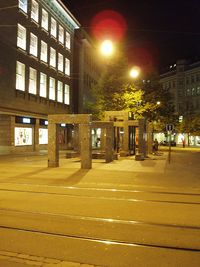 A large granite sculpture by Max Bill was installed adjacent to the Bahnhofstrasse, Zürich in 1983. As is often the case with modern art in public places, the installation generated some controversy.