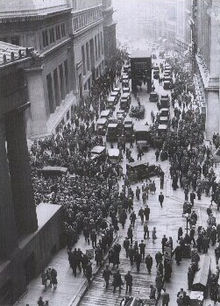 Crowd gathering on Wall Street after the 1929 crash.

The Wall Street Crash of 1929 (October 1929), also known as the Great Crash, and the Stock Market Crash of 1929, was the most devastating stock market crash in the history of the United States, taking into consideration the full extent and duration of its fallout.[1] The crash signaled the beginning of the 12-year Great Depression that affected all Western industrialized countries[2] and that did not end in the United States until the onset of American mobilization for World War II at the end of 1941.

Anyone who bought stocks in mid-1929 and held onto them saw most of his or her adult life pass by before getting back to even.
—Richard M. Salsman[3] 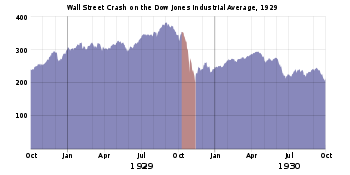 The Roaring Twenties, the decade that led up to the Crash,[4] was a time of wealth and excess. Despite the dangers of speculation, many believed that the stock market would continue to rise indefinitely. The market had been on a six-year run that saw the Dow Jones Industrial Average increase in value fivefold peaking at 381.17 on September 3, 1929.[5] Shortly before the crash, economist Irving Fisher famously proclaimed, "Stock prices have reached what looks like a permanently high plateau."[6] The optimism and financial gains of the great bull market were shaken on "Black Thursday", October 24, 1929, when share prices on the New York Stock Exchange (NYSE) abruptly fell.

In the days leading up to the crash the market was severely unstable. Periods of selling and high volumes of trading were interspersed with brief periods of rising prices and recovery. Economist and author Jude Wanniski later correlated these swings with the prospects for passage of the Smoot–Hawley Tariff Act, which was then being debated in Congress.[7]

On October 24 ("Black Thursday"), the market lost 11% of its value at the opening bell on very heavy trading. Several leading Wall Street bankers met to find a solution to the panic and chaos on the trading floor.[8] The meeting included Thomas W. Lamont, acting head of Morgan Bank; Albert Wiggin, head of the Chase National Bank; and Charles E. Mitchell, president of the National City Bank of New York. They chose Richard Whitney, vice president of the Exchange, to act on their behalf. With the bankers' financial resources behind him, Whitney placed a bid to purchase a large block of shares in U.S. Steel at a price well above the current market. As traders watched, Whitney then placed similar bids on other "blue chip" stocks. This tactic was similar to one that ended the Panic of 1907. It succeeded in halting the slide. The Dow Jones Industrial Average recovered, closing with it down only 6.38 points for the day; however, unlike 1907, the respite was only temporary.

The trading floor of the New York Stock Exchange in 1930, just six months after the crash of 1929

Over the weekend, the events were covered by the newspapers across the United States. On October 28, "Black Monday",[9] more investors decided to get out of the market, and the slide continued with a record loss in the Dow for the day of 38 points, or 13%. The next day, "Black Tuesday", October 29, 1929, about 16 million shares were traded, and the Dow lost an additional 30 points, or 12%.[10][11][12] The volume on stocks traded on October 29, 1929 was a record that was not broken for nearly 40 years.[11] Author Richard M. Salsman wrote that "on October 29—amid rumors that U.S. President Herbert Hoover would not veto the pending Hawley-Smoot Tariff bill—stock prices crashed even further".[3] William C. Durant joined with members of the Rockefeller family and other financial giants to buy large quantities of stocks in order to demonstrate to the public their confidence in the market, but their efforts failed to stop the large decline in prices. The ticker did not stop running until about 7:45 that evening. The market had lost over $30 billion in the space of two days.[13]

The crash followed a speculative boom that had taken hold in the late 1920s, which had led hundreds of thousands of Americans to invest heavily in the stock market. A significant number of them were borrowing money to buy more stocks. By August 1929, brokers were routinely lending small investors more than two-thirds of the face value of the stocks they were buying. Over $8.5 billion was out on loan,[17] more than the entire amount of currency circulating in the U.S. at the time. [13][18] The rising share prices encouraged more people to invest; people hoped the share prices would rise further. Speculation thus fueled further rises and created an economic bubble. Because of margin buying, investors stood to lose large sums of money if the market turned down—or even failed to advance quickly enough. The average P/E (price to earnings) ratio of S&P Composite stocks was 32.6 in September 1929,[19] clearly above historical norms. On October 24, 1929, with the Dow just past its September 3 peak of 381.17, the market finally turned down, and panic selling started.

In 1932, the Pecora Commission was established by the U.S. Senate to study the causes of the crash. The following year, the U.S. Congress passed the Glass–Steagall Act mandating a separation between commercial banks, which take deposits and extend loans, and investment banks, which underwrite, issue, and distribute stocks, bonds, and other securities.

After the experience of the 1929 crash, stock markets around the world instituted measures to suspend trading in the event of rapid declines, claiming that the measures would prevent such panic sales. However, the one-day crash of Black Monday, October 19, 1987, when the Dow Jones Industrial Average fell 22.6%, was worse in percentage terms than any single day of the 1929 crash.

Crowd at New York's American Union Bank during a bank run early in the Great Depression.

Together, the 1929 stock market crash and the Great Depression formed "the biggest financial crisis of the 20th century".[20] "The panic of October 1929 has come to serve as a symbol of the economic contraction that gripped the world during the next decade."[21] "The crash of 1929 caused 'fear mixed with a vertiginous disorientation', but 'shock was quickly cauterized with denial, both official and mass-delusional'."[22] "The falls in share prices on October 24 and 29, 1929 ... were practically instantaneous in all financial markets, except Japan."[23] The Wall Street Crash had a major impact on the U.S. and world economy, and it has been the source of intense academic debate—historical, economic and political—from its aftermath until the present day. "Some people believed that abuses by utility holding companies contributed to the Wall Street Crash of 1929 and the Depression that followed."[24] "Many people blamed the crash on commercial banks that were too eager to put deposits at risk on the stock market."[25]

"The 1929 crash brought the Roaring Twenties shuddering to a halt."[26] As "tentatively expressed" by "economic historian Charles Kindleberger", in 1929 there was no "lender of last resort effectively present", which, if it had existed and were "properly exercised", would have been "key in shortening the business slowdown[s] that normally follows financial crises".[23] The crash marked the beginning of widespread and long-lasting consequences for the United States. The main question is: "Did [the] '29 Crash spark The Depression?",[27] or did it merely coincide with the bursting of a credit-inspired economic bubble? Only 16% of American households were invested in the stock market within the United States during the period leading up to the depression, suggesting that the crash carried somewhat less of a weight in causing the depression. 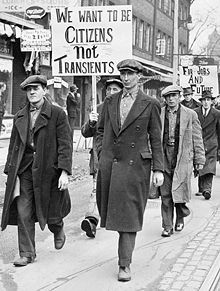 However, the psychological effects of the crash reverberated across the nation as business became aware of the difficulties in securing capital markets investments for new projects and expansions. Business uncertainty naturally affects job security for employees, and as the American worker (the consumer) faced uncertainty with regards to income, naturally the propensity to consume declined. The decline in stock prices caused bankruptcies and severe macroeconomic difficulties including contraction of credit, business closures, firing of workers, bank failures, decline of the money supply, and other economic depressing events. The resultant rise of mass unemployment is seen as a result of the crash, although the crash is by no means the sole event that contributed to the depression. The Wall Street Crash is usually seen as having the greatest impact on the events that followed and therefore is widely regarded as signaling the downward economic slide that initiated the Great Depression. True or not, the consequences were dire for almost everybody. "Most academic experts agree on one aspect of the crash: It wiped out billions of dollars of wealth in one day, and this immediately depressed consumer buying."[27] The failure set off a worldwide run on US gold deposits (i.e., the dollar), and forced the Federal Reserve to raise interest rates into the slump. Some 4,000 banks and other lenders ultimately failed. Also, the uptick rule,[28] which "allowed short selling only when the last tick in a stock's price was positive ... was implemented after the 1929 market crash to prevent short sellers from driving the price of a stock down in a bear run."[29]

Economists and historians disagree as to what role the crash played in subsequent economic, social, and political events. The Economist argued in a 1998 article, "Briefly, the Depression did not start with the stockmarket crash."[30] Nor was it clear at the time of the crash that a depression was starting. On November 23, 1929, The Economist asked: "Can a very serious Stock Exchange collapse produce a serious setback to industry when industrial production is for the most part in a healthy and balanced condition? ... Experts are agreed that there must be some setback, but there is not yet sufficient evidence to prove that it will be long or that it need go to the length of producing a general industrial depression." But The Economist cautioned: "Some bank failures, no doubt, are also to be expected. In the circumstances will the banks have any margin left for financing commercial and industrial enterprises or will they not? The position of the banks is without doubt the key to the situation, and what this is going to be cannot be properly assessed until the dust has cleared away."[31]

Many academics see the Wall Street Crash of 1929 as part of a historical process that was a part of the new theories of boom and bust. According to economists such as Joseph Schumpeter and Nikolai Kondratieff the crash was merely a historical event in the continuing process known as economic cycles. The impact of the crash was merely to increase the speed at which the cycle proceeded to its next level.

Milton Friedman's A Monetary History of the United States, co-written with Anna Schwartz, makes the argument that what made the "great contraction" so severe was not the downturn in the business cycle, trade protectionism, or the 1929 stock market crash. But instead what plunged the country into a deep depression, was the collapse of the banking system during three waves of panics over the 1930-33 period.[32]

White March, Green March, and Blue October also exist but do not refer to a date.
Categories: