In finance, a bond is a debt security, in which the authorized issuer owes the holders a debt and, depending on the terms of the bond, is obliged to pay interest (the coupon) to use and/or to repay the principal at a later date, termed maturity. A bond is a formal contract to repay borrowed money with interest at fixed intervals(ex semi annual,annual,sometimes monthly).[1]

Thus a bond is like a loan: the holder of the bond is the lender (creditor), the issuer of the bond is the borrower (debtor), and the coupon is the interest. Bonds provide the borrower with external funds to finance long-term investments, or, in the case of government bonds, to finance current expenditure. Certificates of deposit (CDs) or commercial paper are considered to be money market instruments and not bonds.

Bonds and stocks are both securities, but the major difference between the two is that (capital) stockholders have an equity stake in the company (i.e., they are owners), whereas bondholders have a creditor stake in the company (i.e., they are lenders). Another difference is that bonds usually have a defined term, or maturity, after which the bond is redeemed, whereas stocks may be outstanding indefinitely. An exception is a consol bond, which is a perpetuity (i.e., bond with no maturity).

Bonds are issued by public authorities, credit institutions, companies and supranational institutions in the primary markets. The most common process of issuing bonds is through underwriting. In underwriting, one or more securities firms or banks, forming a syndicate, buy an entire issue of bonds from an issuer and re-sell them to investors. The security firm takes the risk of being unable to sell on the issue to end investors. Primary issuance is arranged by bookrunners who arrange the bond issue, have the direct contact with investors and act as advisors to the bond issuer in terms of timing and price of the bond issue. The bookrunners' willingness to underwrite must be discussed prior to opening books on a bond issue as there may be limited appetite to do so.

In the case of government bonds, these are usually issued by auctions, called a public sale, where both members of the public and banks may bid for bond. Since the coupon is fixed, but the price is not, the percent return is a function both of the price paid as well as the coupon.[2] However, because the cost of issuance for a publicly auctioned bond can be cost prohibitive for a smaller loan, it is also common for smaller bonds to avoid the underwriting and auction process through the use of a private placement bond. In the case of a private placement bond, the bond is held by the lender and does not enter the large bond market.[3]

Sometimes the documentation allows the issuer to borrow more at a later date by issuing further bonds on the same terms as before, but at the current market price. This is called a tap issue or bond tap.[4]

The most important features of a bond are, 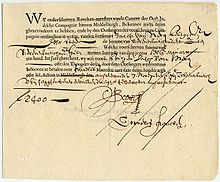 Bond issued by the Dutch East India Company in 1623 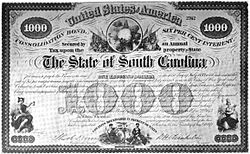 Bond certificate for the state of South Carolina issued in 1873 under the state's Consolidation Act.

The following descriptions are not mutually exclusive, and more than one of them may apply to a particular bond. 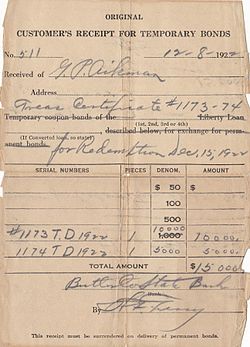 Some companies, banks, governments, and other sovereign entities may decide to issue bonds in foreign currencies as it may appear to be more stable and predictable than their domestic currency. Issuing bonds denominated in foreign currencies also gives issuers the ability to access investment capital available in foreign markets. The proceeds from the issuance of these bonds can be used by companies to break into foreign markets, or can be converted into the issuing company's local currency to be used on existing operations through the use of foreign exchange swap hedges. Foreign issuer bonds can also be used to hedge foreign exchange rate risk. Some foreign issuer bonds are called by their nicknames, such as the "samurai bond." These can be issued by foreign issuers looking to diversify their investor base away from domestic markets. These bond issues are generally governed by the law of the market of issuance, e.g., a samurai bond, issued by an investor based in Europe, will be governed by Japanese law. Not all of the following bonds are restricted for purchase by investors in the market of issuance.

The interest rate that the issuer of a bond must pay is influenced by a variety of factors, such as current market interest rates, the length of the term and the creditworthiness of the issuer.

These factors are likely to change over time, so the market price of a bond will vary after it is issued. This price is expressed as a percentage of nominal value. Bonds are not necessarily issued at par (100% of face value, corresponding to a price of 100), but bond prices converge to par when they approach maturity (if the market expects the maturity payment to be made in full and on time) as this is the price the issuer will pay to redeem the bond. This is referred to as "Pull to Par". At other times, prices can be above par (bond is priced at greater than 100), which is called trading at a premium, or below par (bond is priced at less than 100), which is called trading at a discount. Most government bonds are denominated in units of $1000 in the United States, or in units of £100 in the United Kingdom. Hence, a deep discount US bond, selling at a price of 75.26, indicates a selling price of $752.60 per bond sold. (Often, in the US, bond prices are quoted in points and thirty-seconds of a point, rather than in decimal form.) Some short-term bonds, such as the U.S. Treasury Bill, are always issued at a discount, and pay par amount at maturity rather than paying coupons. This is called a discount bond.

The market price of a bond is the present value of all expected future interest and principal payments of the bond discounted at the bond's redemption yield, or rate of return. That relationship defines the redemption yield on the bond, which represents the current market interest rate for bonds with similar characteristics. The yield and price of a bond are inversely related so that when market interest rates rise, bond prices fall and vice versa. Thus the redemption yield could be considered to be made up of two parts: the current yield (see below) and the expected capital gain or loss: roughly the current yield plus the capital gain (negative for loss) per year until redemption.

The relationship between yield and maturity for otherwise identical bonds is called a yield curve. A yield curve is essentially a measure of the term structure of bonds.

Bonds markets, unlike stock or share markets, often do not have a centralized exchange or trading system. Rather, in most developed bond markets such as the U.S., Japan and western Europe, bonds trade in decentralized, dealer-based over-the-counter markets. In such a market, market liquidity is provided by dealers and other market participants committing risk capital to trading activity. In the bond market, when an investor buys or sells a bond, the counterparty to the trade is almost always a bank or securities firm acting as a dealer. In some cases, when a dealer buys a bond from an investor, the dealer carries the bond "in inventory." The dealer's position is then subject to risks of price fluctuation. In other cases, the dealer immediately resells the bond to another investor.

Bond markets can also differ from stock markets in that, in some markets, investors sometimes do not pay brokerage commissions to dealers with whom they buy or sell bonds. Rather, the dealers earn revenue by means of the spread, or difference, between the price at which the dealer buys a bond from one investor—the "bid" price—and the price at which he or she sells the same bond to another investor—the "ask" or "offer" price. The bid/offer spread represents the total transaction cost associated with transferring a bond from one investor to another.

Bonds are bought and traded mostly by institutions like central banks, sovereign wealth funds, pension funds, insurance companies and banks. Most individuals who want to own bonds do so through bond funds. Still, in the U.S., nearly 10% of all bonds outstanding are held directly by households.

Sometimes, bond markets rise (while yields fall) when stock markets fall. More relevantly, the volatility of bonds (especially short and medium dated bonds) is lower than that of stocks. Thus bonds are generally viewed as safer investments than stocks, but this perception is only partially correct. Bonds do suffer from less day-to-day volatility than stocks, and bonds' interest payments are often higher than the general level of dividend payments. Bonds are liquid  – it is fairly easy to sell one's bond investments, though not nearly as easy as it is to sell stocks  – and the comparative certainty of a fixed interest payment twice per year is attractive. Bondholders also enjoy a measure of legal protection: under the law of most countries, if a company goes bankrupt, its bondholders will often receive some money back (the recovery amount), whereas the company's stock often ends up valueless. However, bonds can also be risky but less risky than stocks:

Price changes in a bond will also immediately affect mutual funds that hold these bonds. If the value of the bonds held in a trading portfolio has fallen over the day, the value of the portfolio will also have fallen. This can be damaging for professional investors such as banks, insurance companies, pension funds and asset managers (irrespective of whether the value is immediately "marked to market" or not). If there is any chance a holder of individual bonds may need to sell his bonds and "cash out", interest rate risk could become a real problem (conversely, bonds' market prices would increase if the prevailing interest rate were to drop, as it did from 2001 through 2003[citation needed]). One way to quantify the interest rate risk on a bond is in terms of its duration. Efforts to control this risk are called immunization or hedging.

There is no guarantee of how much money will remain to repay bondholders. As an example, after an accounting scandal and a Chapter 11 bankruptcy at the giant telecommunications company Worldcom, in 2004 its bondholders ended up being paid 35.7 cents on the dollar[citation needed]. In a bankruptcy involving reorganization or recapitalization, as opposed to liquidation, bondholders may end up having the value of their bonds reduced, often through an exchange for a smaller number of newly issued bonds.

A number of bond indices exist for the purposes of managing portfolios and measuring performance, similar to the S&P 500 or Russell Indexes for stocks. The most common American benchmarks are the Barclays Capital Aggregate (ex Lehman Aggregate), Citigroup BIG and Merrill Lynch Domestic Master. Most indices are parts of families of broader indices that can be used to measure global bond portfolios, or may be further subdivided by maturity and/or sector for managing specialized portfolios.