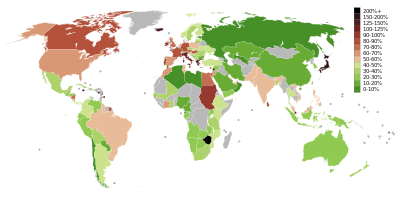 Foreign currency reserves and gold minus external debt based on 2010 data from CIA Factbook.

Debt is used to finance and pay for entreprises and business around the world. The levels of debt – how much debt is outstanding – and the flows of debt – how much the level of debt changes over time – are basic macroeconomic data, and vary between countries.

For more details on this topic, see Debt to GDP ratio.

Because GDP is generally quoted with units of currency/year, and debt levels have units of currency, the debt level/GDP ratio has units of years, which may be interpreted as "how many years it would take to repay the debt if all income went to debt repayment". In practice this cannot happen – some of GDP must go to survival – and historically debt repayment rates during periods of repayment have been about 4%–10% of GDP (as in the United States during the Great Depression and World War II),[citation needed] so practical time to repay debt is rather Debt/GDP times 10–25.

$5.7 trillion of gross debt was issued in 2004 according to Thomson Financial numbers, while GDP grew $4 trillion (currency exchange rate). That does not mean that net debt grew faster than GDP on a worldwide average (even if it has done so for years after 2001 in the USA), as debt issuance may be refinancing of existing debt, often "rolling over" debt that comes due into new debt. When debt matures new debt is many times issued to repay the old debt, perhaps from the same creditor. That is one reason why debt issuance far surpasses equity issuance in currency value.

Debt is often issued with a repayment plan (a "time to maturity" in some cases), repayment times may be between a few days (interbank cash flow management) and 50 years or longer (consumer real estate debt). The average repayment time of all worldwide outstanding debt is perhaps[weasel words] 10 years.[citation needed]

Equity is another way of financing business, as it has no set time to maturity and pays no set interest. It pays profit from the company it has a claim on.

All credit is debt, a liability. Debt is created by lenders and borrowers agreeing to exchange the use of money for the promise to repay. The unit of money lent is the asset of the creditor and the liability of the debtor.

Notes are paper with terms of exchange, hence credits or access to money. All currencies are notes ("This note is legal tender for..."). Money is based on a fiat whereupon all agree upon the exchange values of similar pieces of paper. This extends to savings and checking accounts which are depository receipts for money loaned to bankers who in turn lend it to other borrowers. And thus it multiplies, a deposit becomes a loan that becomes another deposit and so on.

The terms of the lending agreement are the key elements of the contractual terms of a promissory note regarding repayment including the amount(s) loaned and to be repaid, loan fees, time value and risk value interest charges, due dates, balloon payments, default terms and more. All material information should be disclosed on financial statements or footnotes.

Worldwide Debt, Equity and Equity-related issuance reached record-breaking levels with over $5 trillion in proceeds raised, surpassing 2001’s record of $4.4 trillion. The $5 trillion of borrowings represented 14% of the GDP flow during the year (4.938/36.3) (see world economy). 93% of the issuance was debt, 7% was equity. Note that these numbers don't include all mortgage borrowing, which was $3.8 trillion in the United States during 2003. $900 billion of it is in mortgage-backed securities, at least $546 billion in US Federal Credit Agency.