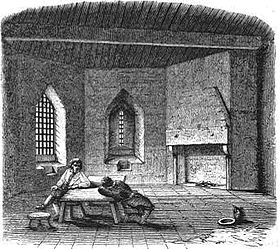 A mid-Victorian depiction of the debtors prison at St Briavels Castle.

A debtors' prison is a prison for those who are unable to pay a debt.

Prior to the mid 19th century debtors' prisons were a common way to deal with unpaid debt.[1]

Debt bondage was common in ancient Mediterranean societies, including Greek city-states. Economic crises in Athens around 600 BC had resulted in so many Athenians sold into slavery that Solon enacted the seisachtheia which banned the practice of debt bondage and returned Athenians to their land as free men, at least according to Solon's own claims.

Under the early Roman Republic, a person could pledge himself as a collateral for a loan, in a type of contract called Nexum. If he failed to pay, he was liable to become his creditor's slave. This practice was outlawed in 326 BC by the Lex Poetelia Papiria.

During Europe's Middle Ages, debtors, both men and women, were locked up together in a single large cell until their families paid their debt.[2] Debt prisoners often died of diseases contracted from other debt prisoners. Conditions included starvation and abuse from other prisoners. If the father of a family was imprisoned for debt, the family business often suffered while the mother and children fell into poverty. Unable to pay the debt, the father often remained in debtors' prison for many years. Some debt prisoners were released to become serfs or indentured servants (debt bondage) until they paid off their debt in labor. 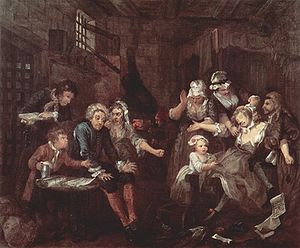 William Hogarth, A Rake's Progress, depicting the downfall of a man to a debt prison. All is lost by this seventh painting, and Tom is incarcerated in the notorious Fleet debtors' prison. He ignores the distress of both his angry new (old) wife and faithful Sarah, who cannot help him this time. Both the beer-boy and the jailer demand money from him. Tom begins to go mad, as indicated by both a telescope for celestial observation poking out of the barred window and an alchemy experiment in the background. Beside Tom is a rejected play; another inmate is writing a pamphlet on how to solve the National debt. Above the bed at right is an apparatus for wings, which is more clearly seen in the engraved version at the left.

In the Kingdom of Great Britain and the later United Kingdom, debtors' prisons varied in the amount of freedom they allowed the debtor. With a little money, a debtor could pay for some freedoms; some prisons allowed inmates to conduct business and to receive visitors; others (including the Fleet and King's Bench Prisons) even allowed inmates to live a short distance outside the prison — a practice known as the 'Liberty of the Rules' — and the Fleet even tolerated clandestine 'Fleet Marriages'.

Life in these prisons, however, was far from pleasant, and the inmates were forced to pay for their keep. Samuel Byrom, son of the writer and poet John Byrom, was imprisoned for debt in the Fleet in 1725, and in 1729 he sent a petition to his old school friend, the Duke of Dorset, in which he raged against the injustices of the system:

What barbarity can be greater than for gaolers (without provocation) to load prisoners with irons, and thrust them into dungeons, and manacle them, and deny their friends to visit them, and force them to pay excessive fines for their chamber rent, their victuals and drinks; to open their letters and seize the charity that is sent to them! And when debtors have succeeded in arranging with their creditors, hundreds are detained in prison for chamber-rent and other unjust demands put forward by their gaolers, so that at last, in their despair, many are driven to commit suicide... gaolers should be paid a fixed salary and forbidden, under pain of instant dismissal, to accept bribe, fee or reward of any kind... law of imprisonment for debts inflicts a greater loss on the country, in the way of wasted power and energies, than do monasteries and nunneries in foreign lands, and among Roman-Catholic peoples... Holland, the most unpolite country in the world, uses debtors with mildness and malefactors with rigour; England, on the other hand, shows mercy to murderers and robbers, but of poor debtors impossibilities are demanded... Manchester Times, 22 October 1862[3]

Some debtor prisoners were even less fortunate, being sent to prisons with a mixture of vicious criminals and petty criminals, and many more were confined to a single cell.

The father of the English author Charles Dickens was sent to one of these prisons (the Marshalsea), which were often described in Dickens's novels.[4]

The Debtors' Act of 1869 abolished imprisonment for debt, although debtors who had the means to pay their debt, but did not do so, could still be incarcerated for up to six weeks.

In 1833 the United States abolished Federal imprisonment for unpaid debts,[5] and most states outlawed the practice around the same time.[6][7] Before then, the use of debtor's prisons was widespread; signatories to the Declaration of Independence, James Wilson and Robert Morris were both later incarcerated, as were 2,000 New Yorkers annually by 1816. Henry Lee III, better known as Light-Horse Harry Lee, a Revolutionary War general, former governor of Virginia, and father of Robert E. Lee, was imprisoned for debt between 1808 and 1809.[8] Sometimes, imprisonment would result from less than sixty cents' worth of debt.[9]

Six states (Arkansas, Arizona, Illinois, Indiana, Minnesota, and Washington) allow debt collectors to seek arrest warrants for debtors in default if all other collection methods have failed. Whether a debtor will actually be prosecuted or not varies from state to state, county to county, and town to town. The individual is taken into custody and is typically required to submit financial documentation to the courts (to facilitate seizure of assets or wage garnishment), although in some cases the individual may be held indefinitely until a payment plan is reached or the debt is paid in full, especially if the individual is insolvent.[10] Other states have outlawed this type of collection action (Tennessee and Oklahoma have ruled it unconstitutional)[11] unless the court finds that the debtor actually possesses the means to pay—except in the case of child support obligations.[12][13][14]

Most state constitutions, including Minnesota's, have clauses dating to the 1850s that expressly prohibit the jailing of people for their debts. [15] Some people[13] make the claim that it is unconstitutional in the United States to incarcerate someone solely for failing to pay a debt. However, there is little settled law on this matter and plenty of precedent for de facto debtors' prisons.[12][13][14]

More Americans are arrested for not paying debts, an effect of the recession. “More than a third of all U.S. states allow borrowers who can't or won't pay to be jailed.” according to The Washington Post. "Judges have signed off on more than 5,000 such warrants since the start of 2010 in nine counties." [1]

In the Middle Ages, before the introduction of public law, a debtor who defaulted could be sent to debtor’s prison by the creditor, which was often a private prison. This would often be accompanied by a work program.

In the late Middle Ages, and at the beginning of the modern era, public law was codified in Germany. This served to standardize the coercive arrest (Pressionschaft), and got rid of the many arbitrary sanctions that were not universal.[17] In some areas (like Nürnberg) the debtor could sell or redistribute their debt.

In most of the cities the towers and city fortifications functioned as jails. For certain sanctions there were designated prisons, hence some towers being called debtors prison (Schuldturm). The term Schuldturm, outside of the Saxon constitution, became the catchword for public law debtor’s prison. 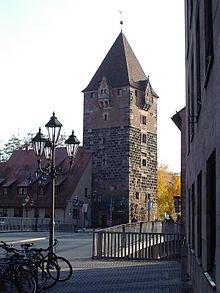 In the modern era the debtor’s detainment or citizen’s arrest remained valid in Germany. Sometimes it was used as a tool to compel payment, other times it was used to secure the arrest of an individual and ensure a trial against them in order to garnish wages, replevin or a form of trover. This practice was particularly disgraceful to a person’s identity, but had different rules than criminal trials. It was more similar to the modern enforcement of sentences (Strafvollzug) e.g.: the debtor would be able to work off their debt for a certain amount of days, gradated by how much they owed.

During the 19th Century the debtor’s prison in Europe was mostly eliminated. In France this process began in 1867, then came Austria, and the North German Confederation on May 29, 1868. Great Britain passed the Debtors Act in 1869 and in Sweden the step was taken in 1879.

In 1976 Article 11 of the ICCPR – International Covenant on Civil and Political Rights – came into effect stating, “No one shall be imprisoned merely on the ground of inability to fulfill a contractual obligation.”

At present a comparable concept to debtors prison still exists in various forms in Germany:

Debtors in the United Arab Emirates, including Dubai, are imprisoned for failing to pay their debts. This is a common practice in the country. Private banks are not sympathetic to the debtors once they are in jail so many just choose to leave the country where they can negotiate for settlements later. The practice of fleeing UAE to avoid arrest because of debt defaults is considered a lot more feasible to customers that are unable to meet their obligations.[18][19]

While Hong Kong had long imprisoned debtors until 1984,[20][21] the first mainland prison sentence for unpaid debts was handed down in 2008. Life imprisonment is possible for non-repayment of debts incurred with "malicious intent".[22]