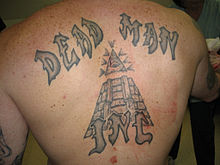 Tattoos on the back of a Dead Man Incorporated gang member

Prison tattooing is the practice of creating and displaying tattoos in a prison environment. They are often used to portray gang membership,[1] and are often used as a form of code and have hidden meanings. However, due to the lack of proper equipment and sterile environments in prison, the practice poses health risks.

Since tattooing in prison is illegal[2] in the United States, the inmates do not have the proper equipment necessary for the practice. This forces inmates to find ways to create their own tattooing devices out of their belongings. Improvised tattooing equipment has been assembled from materials such as mechanical pencils, magnets, radio transistors, staples, paper clips or guitar strings.[3] The ink used also needs to be improvised, either taken from pens or made using melted plastic, soot mixed with shampoo, or melted Styrofoam. Prison tattooing is not generally done freely, and the tattooists are normally paid with anything from stamps and cigarettes to actual cash.

There are many different symbols and numbers that represent multiple gangs or groups. Certain images like spider webs and teardrops can represent the length of sentences, or the number people that the wearer has killed, respectively. Tattoos are also used to communicate who the inmates are as people - for example, white supremacists will display prominent tattoos to show their beliefs. Some common symbols used in this manner are the number 311, representing the KKK; the percentile 100%, a white supremacist indicator of racial purity; Valknuts; swastikas[4]; three dots arranged as a triangle, meaning for "mi vida loca" or "my crazy life"; clock with no hands to show "doing time"; spider webs; or the number 13.[5]

One common prison tattoo is the five dots tattoo, a quincunx usually placed on the hand, with different meanings in different cultures.

Since the tattoo machines are homemade and efficient means of sterilization are not available, there are many health risks involved. Deadly diseases like hepatitis and HIV/AIDS can be passed from one person to the next through shared needles. Also, the makeshift ink can damage the skin, cause permanent scarring, or contain harmful chemicals.[6] If the inmates are found tattooing, their materials are confiscated and they are put into solitary confinement for approximately 15 days.[citation needed] If an inmate is caught with a new tattoo (obvious with redness and swelling), they are charged.[7]