The economy of Iceland is small and subject to high volatility. In 2007, gross domestic product was US$12.144bn in total and $38,400 per capita, based on purchasing power parity (PPP) estimates.[6] The financial crisis of 2007–2010 has produced a decline in GDP and employment, although the magnitude of this decline remains to be determined.

Iceland has a mixed economy with high levels of free trade and government intervention. However, government consumption is less than in other Nordic countries.

In the 1990s Iceland undertook extensive free market reforms, which initially produced strong economic growth. As a result, Iceland was rated as having one of the world's highest levels of economic freedom[7] as well as civil freedoms. As of 2007, Iceland tops the list of nations ranked by Human Development Index[8] and one of the most egalitarian, according to the calculation provided by the Gini coefficient.[9]

From 2006 onwards, the economy faced problems of growing inflation and current account deficits. Partly in response, and partly as a result of earlier reforms, the financial system expanded rapidly before collapsing entirely in a sweeping financial crisis. Iceland had to obtain emergency funding from the International Monetary Fund and a range of European countries in November 2008.

Iceland occupies a land area of 103,000 square kilometers. It has a 4,790 kilometer coastline and a 200 nautical mile (370.4 km) exclusive economic zone extending over 758,000 square kilometers of water. Approximately 0.7% of Iceland's land is arable, since the island's terrain is mostly mountainous and volcanic.[10]

Iceland has few proven mineral resources. In the past, deposits of sulphur have been mined, and diatomite (skeletal algae) was extracted from lake Mývatn until recently. That plant has now been closed for environmental reasons. The only natural resource conversion in Iceland is the manufacture of cement. Concrete is widely used as building material, including for all types of residential housing.

By harnessing the abundant hydroelectric and geothermal power sources, Iceland's renewable energy industry provides over 70% of all the nation's primary energy[11] - proportionally more than any other country[12] - with 99.9% of Iceland's electricity being generated from renewables. The Icelandic Parliament decided in 1998 to convert vehicle and fishing fleets to hydrogen fuel and consequently Iceland expects to be energy-independent, using 100% renewable energy, by 2050.[13] As part of this program, the country opened the world's first public hydrogen filling station in 2003. As of 2007, it has about 40 hydrogen-powered vehicles on the road, second only to the U.S. state of California.

By far the largest of the many Icelandic hydroelectric power stations is Kárahnjúkavirkjun (690 MW), which is being constructed in the area north of Vatnajökull. Other stations include Búrfell (270 MW), Hrauneyjarfoss (210 MW), Sigalda (150 MW), Blanda (150 MW), and more. Iceland has explored the feasibility of exporting hydroelectric energy via submarine cable to mainland Europe and also actively seeks to expand its power-intensive industries, including aluminium and ferro-silicon smelting plants.

The presence of abundant electrical power due to Iceland's geothermal energy sources has led to the growth of the manufacturing sector. Power-intensive industries, which are the largest components of the manufacturing sector, produce mainly for export. Manufactured products constituted 36% of all merchandise exports, an increase from the 1997 figure of 22%. Power-intensive products's share of merchandise exports is 21%, compared to 12% in 1997.[14] 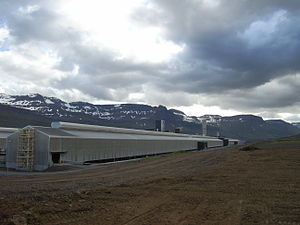 Aluminium smelting is the most important power-intensive industry in Iceland. There are currently three plants in operation, with one under construction and two in the planning stage.

Rio Tinto Alcan operates Iceland's first aluminium smelter (plant name: ISAL), in Straumsvík, near the town of Hafnarfjörður. The plant has been in operation since 1969. Its initial capacity was 33,000 metric tons per year (mtpy) but has since been expanded several times and now has a capacity of about 189,000 mtpy.

The second plant started operations in 1998 and is operated by Norðurál, a wholly owned subsidiary of U.S.-based Century Aluminium Company. It is located in Grundartangi in Western Iceland near the town of Akranes. Its current capacity is 220,000 mtpy but an expansion to 260,000 mtpy is already underway and is expected to be completed in the last quarter of 2007.[15]

United States-based aluminum manufacturer Alcoa has become a major investor in Iceland and has a major plant under construction near the town of Reyðarfjördur. The plant, known as Fjarðaál (or "aluminum of the fjords") has a capacity of 346,000 mtpy and was put into operation in April 2008. To power the plant, Landsvirkjun built Kárahnjukar, a 630-megawatt hydropower station. This is an astonishing figure, as prior to this development, the entire nation of Iceland's power usage was in the 300-megawatt range.

According to Alcoa, construction of Fjarðaál entailed no human displacement, no impact on endangered species, and no danger to commercial fisheries; there will also be no significant effect on reindeer, bird and seal populations.[16] However, the project drew considerable opposition from environmentalist groups such as the World Wide Fund for Nature, which called on Alcoa to abandon the plan to build Fjarðaál. In addition, Icelandic singer Björk was a notable early opponent to the plan; protesting the proposed construction, the singer's mother, Hildur Rúna Hauksdóttir, went on a hunger strike in 2002.[17]

Alcoa is also conducting a feasibility study on the possibility of building a second plant in Iceland near Húsavík. That plant would have a 250,000 mtpy capacity and was planned to be entirely powered entirely by geothermal power, however estimates show a potential need for other sources of power. If the decision is made to build the plant, construction would not start before 2010.[18]

Norðurál has signed a memorandum of understanding to purchase electricity for its own aluminum reduction project in Helguvík. The agreement was reached between Norðurál and two Icelandic geothermal power producers, Hitaveita Suðurnesja and Orkuveita Reykjavíkur. The power supplied will initially support aluminum production of 150,000 mtpy, which will eventually grow to support 250,000 mtpy.[19]

If all of the currently proposed expansions and new plants are constructed, the total production capacity of the Icelandic aluminum industry will rise to 1,542,000 mtpy, compared to the current capacity of 400,000 mtpy.

The Icelandic banking system played a central role in the financial crisis. The banks expanded aggressively overseas following financial deregulation, acquiring assets far in excess of the country's GDP and therefore of the government's capacity to rescue them in the event of a run. All three major commercial banks, Landsbanki, Kaupþing Bank and Glitnir went into administration in early October 2008. The Althing granted the Icelandic Financial Supervisory Authority sweeping powers over banks as its financial system tottered and its currency plunged.[20] Speculation continues about the financial health of the other banks.[21] All of the major banks were publicly listed on Kauphöll Íslands (the Iceland Stock Exchange), though each was either wholly state-owned or merged with previously state-owned banks in the past.

Because of the persistent inflation, historical reliance on fish production and the long-standing public ownership of the commercial banks, equity markets were slow to develop. Kauphöll Íslands, the Iceland Stock Exchange (better known as ICEX), was created in 1985. Trading in Icelandic T-Bonds began in 1986 and trading in equities commenced in 1990. All domestic trading in Icelandic equities, bonds and mutual funds takes place on the ICEX.

The ICEX has used electronic trading systems since its creation. Since 2000, SAXESS, the joint trading system of the NOREX alliance, has been used. There are currently two equities markets on the ICEX. The Main Market is the larger and better known of the two. The Alternative Market is a less regulated over-the-counter market. Because of the small size of the market, trading is illiquid in comparison with larger markets. A variety of firms across all sectors of the Icelandic economy are listed on the ICEX.

The most important stock market index is the ICEX 15.

Historically, investors tended to be reluctant to hold Icelandic bonds because of the persistence of high inflation and the volatility of the Króna. What did exist was largely limited to bonds offered by the central government. The bond market on the ICEX has boomed in recent years, however, largely because of the resale of mortgages as housing bonds.

A mutual fund market exists on the ICEX in theory, but no funds are currently listed. A small derivatives market formerly existed, but was closed in 1999 because of illiquidity.

Iceland's economy is highly export-driven. Marine products account for the majority of goods exports. Other important exports include aluminum, ferro-silicon alloys, machinery and electronic equipment for the fishing industry, software, woollen goods. Most of Iceland's exports go to the European Union (EU) and European Free Trade Association (EFTA) countries, the United States, and Japan. The 2005 value of Iceland's exports was $3.215 billion. f.o.b.[22]

The main imports are machinery and equipment, petroleum products, foodstuffs and textiles. Cement is Iceland's most imported product. The total 2005 value of imports was $4.582 billion. Iceland's primary import partner is Germany, with 12.6%, followed by the United States, Norway, and Denmark. Most agricultural products are subject to high tariffs; the import of some products, such as uncooked meat, is greatly restricted for phyto-sanitary reasons.[22][23]

Iceland's relatively liberal trading policy has been strengthened by accession to the European Economic Area in 1993 and by the Uruguay Round, which also brought significantly improved market access for Iceland's exports, particularly seafood products. However, the agricultural sector remains heavily subsidized and protected; some tariffs range as high as 700%.

The fishing industry is one of the most important industries. It provides 40% of export income and employs 7.0% of the workforce; therefore, the state of the economy remains sensitive to world prices for fish products.[22]

Iceland became a full European Free Trade Association member in 1970 and entered into a free trade agreement with the European Community in 1973. Under the agreement on a European Economic Area, effective January 1, 1994, there is basically free cross-border movement of capital, labor, goods, and services between Iceland, Norway, and the EU countries. However, the government of Iceland remains opposed to EU membership, primarily because of Icelanders' concern about losing control over their fishing resources. Iceland also has bilateral free trade agreements with several countries outside the EEA. The most extensive of these is the Hoyvík Agreement between Iceland and the Faroe Islands, this agreement goes even further than the EEA agreement by establishing free trade in agricultural products between the nations. Iceland has a free trade agreement with Mexico on November 27, 2000.

Monetary policy is carried out by the Central Bank of Iceland, which maintains a 2.5% inflation target rate, adopted in March 2001.[25]

Iceland's economy had been diversifying into manufacturing and service industries in the 1990s, and new developments in software production, biotechnology, and financial services were taking place. The tourism sector was also expanding, with the recent trends in ecotourism and whale watching. However, in 2008, the Icelandic economy entered a deep recession in correspondence to the global financial crisis. There is even speculation that Iceland is now entering an economic depression, making it the first economy of the developed world to plunge into depression due to the global recession of 2008. Although Iceland's economy grew 3.3% during the last quarter of 2009, the overall contraction in GDP over 2009 was 6.5%, less than the 10% originally forecasted by the IMF.[28][29]