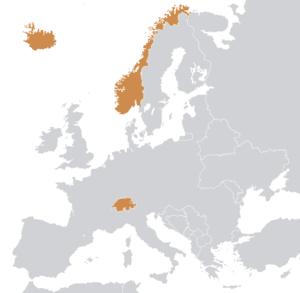 The European Free Trade Association (EFTA) is a European which was established on 3 May 1960 as an alternative for European states who were either unable to, or chose not to, join the then-European Economic Community (now the ).

The EFTA Convention was signed on 4 January 1960 in by seven states. Today only , , , and remain members of EFTA (of which only and are founding members). The Stockholm Convention was subsequently replaced by the .

This Convention provides for the liberalisation of trade among the member states. Three of the EFTA countries are part of the European Union Internal Market through the Agreement on a (EEA), which took effect in 1994; the fourth, Switzerland, opted to conclude bilateral agreements with the EU. In addition, the EFTA states have jointly concluded free trade agreements with a number of other countries.

An important development was the conclusion by Switzerland in 1999 of a set of bilateral agreements with the European Union covering a wide range of areas, including movement of persons, transport and technical barriers to trade. This development prompted the EFTA States to modernise their Convention to ensure that it will continue to provide a successful framework for the expansion and liberalization of trade among them and with the rest of the world.

The EFTA UPDATE on 1 June 2002. The main areas in which the Convention has been modernised include: Mutual recognition of conformity assessments; Intellectual property rights; Movement of persons, social security and mutual recognition of diplomas; Investment and services; Land and air transport; Public procurement; Agriculture;

thumb|left|300px|">legend|#008000|EFTA member stateslegend|#66FF99|Former member states, now EU member statesIts original members were the , , , , , and . During the 1960s these countries were often referred to as the Outer Seven, as opposed to the of the then-. [ [http://www.time.com/time/magazine/article/0,9171,874317,00.html Now, the Seven and a Half - TIME ] ]
became an associate member in 1961 (becoming a full member in 1986), and joined in 1970. The United Kingdom and Denmark joined the European Communities in 1973 (together with Ireland), and hence ceased to be EFTA members. Portugal also left EFTA for the European Community in 1986. joined in 1991 (previously its interests in EFTA had been represented by Switzerland). Finally, Austria, Sweden and Finland joined the in 1995 and hence ceased to be EFTA members.

EFTA is governed by the EFTA Council and serviced by the EFTA Secretariat. In addition, in connection with the EEA Agreement of 1992, two other EFTA organisations were established, the EFTA Surveillance Authority and the EFTA Court.

The and the regulate the activities of the EFTA members in respect of their obligations in the (EEA). Since Switzerland is not an EEA member, it does not participate in these institutions.

The original plan for the EEA lacked the EFTA Court or the EFTA Surveillance Authority, and instead had the European Court of Justice and the European Commission were to exercise those roles. However, during the negotiations for the EEA agreement, the European Court of Justice informed the by way of letter that they considered that giving the EU institutions powers with respect to non-EU member states would be a violation of the treaties, and therefore the current arrangement was developed instead.

The Portugal Fund was established in 1975 when was still a member of EFTA, to provide funding for the development and reconstruction of Portugal after the . When Portugal left EFTA in 1985, the remaining EFTA members decided to nonetheless continue the Portugal Fund, so Portugal would continue to benefit from it. The Fund originally took the form of a low-interest loan from the EFTA member states to Portugal, to the value of 100 million s. Repayment was originally to commence in 1988, but EFTA then decided to postpone the start of repayments until 1998. The Portugal Fund has now been dissolved by the Member States.

EFTA also originated the and the , both of which are open to non-EFTA states.

Relationship to the European Economic Area

The EFTA members, except for , are also members of the (EEA).

EFTA has several free trade agreements with non-EU countries as well as declarations on cooperation and joint workgroups to improve trade. Currently, the EFTA States have established preferential trade relations with 20 States and Territories, in addition to the 27 Member States of the European Union.

Norwegians have rejected in referendums to join the EU on two occasions. At the time of the first (1972) their neighbours the Kingdom of Denmark joined. The second time (1994) two other Nordic neighbours, and joined the EU. The two last governments of Norway have been unable and unwilling to advance the question, as they have both been coalition governments consisting of both proponents and opponents.

Iceland is not likely to join the EU in the near future due to political indifference towards the Union.

Since Switzerland rejected the EEA in 1992, referendums on EU membership have been initiated, the last time in 2001. These were rejected by clear majorities.

In mid-2005, representatives of the have hinted at the possibility of their territory joining EFTA. However, the chances of the Faroes' bid for membership are uncertain because, according to the EFTA Convention, only states may become members of the Association.Fact|date=March 2008If the gain independence there is a strong possibility that they may opt out of the EU altogether as has done.

The United Kingdom benefited from the lack of common tariffs for EFTA members, by importing goods from the and selling them on to other EFTA members. Due to the advancement of the and the decision to focus on , rather than the and Commonwealth nations such as , and , as trading partners, the chose to apply for EEC membership in 1961 (however, it did not become a member until 1973).