Economic affairs in Cyprus are dominated by the division of the country into the southern area, controlled by the internationally recognized government of the Republic of Cyprus, and Turkish-occupied northern Cyprus.

Classified by the World Bank as a high-income economy,[15] Cyprus was included by the International Monetary Fund in its list of advanced economies in 2001.[16] Erratic growth rates in the 1990s reflected the economy's vulnerability to swings in tourist arrivals, caused by political instability on the island and fluctuations in economic conditions in Western Europe. On 1 January 2008, the country entered the eurozone and adopted the euro as its official currency, replacing the Cypriot pound at an irrevocable fixed exchange rate of CYP 0.585274 per EUR 1.00.

Economy in the government-controlled area

Nicosia, the capital and economic heart of Cyprus.

Cyprus has an open, free-market, service-based economy with some light manufacturing. Internationally, Cyprus promotes its geographical location as a "bridge" between East and West, along with its educated English-speaking population, moderate local costs, good airline connections, and telecommunications.

Since gaining independence from the United Kingdom in 1960, Cyprus has had a record of successful economic performance, reflected in strong growth, full employment conditions and relative stability. The underdeveloped agrarian economy inherited from colonial rule has been transformed into a modern economy, with dynamic services, industrial and agricultural sectors and an advanced physical and social infrastructure.

The Cypriots are among the most prosperous people in the Mediterranean region, with GDP per capita reaching $30,000.[3] Their standard of living is reflected in the country's "very high" Human Development Index,[17] and Cyprus is ranked 23rd in the world in terms of the Quality-of-life Index.[18]

However, after more than three decades of unbroken growth, the Cypriot economy contracted in 2009.[19] This reflected the exposure of Cyprus to the global recession and European sovereign debt crisis. In recent times, concerns have been raised about the state of public finances and spiralling borrowing costs. Furthermore, Cyprus was dealt a severe blow by the Evangelos Florakis Naval Base explosion in July 2011, with the cost to the economy estimated at €1–3 billion, or up to 17% of GDP.[20]

The economic achievements of Cyprus during the preceding decades have been significant, bearing in mind the severe economic and social dislocation created by the Turkish invasion of 1974 and the continuing occupation of the northern part of the island by Turkey. The Turkish invasion inflicted a serious blow to the Cyprus economy and in particular to agriculture, tourism, mining and quarrying: 70 percent of the island’s wealth-producing resources were lost, the tourist industry lost 65 percent of its hotels and tourist accommodation, the industrial sector lost 46 percent, and mining and quarrying lost 56 percent of production. The loss of the port of Famagusta, which handled 83 percent of the general cargo, and the closure of Nicosia International Airport, in the buffer zone, were additional setbacks.

The success of Cyprus in the economic sphere has been attributed, inter alia, to the adoption of a market-oriented economic system, the pursuance of sound macroeconomic policies by the government as well as the existence of a dynamic and flexible entrepreneurship and a highly educated labor force. Moreover, the economy benefited from the close cooperation between the public and private sectors.

In the past 30 years, the economy has shifted from agriculture to light manufacturing and services. The services sector, including tourism, contributes almost 80% to GDP and employs more than 70% of the labor force. Industry and construction account for approximately one-fifth of GDP and labor, while agriculture is responsible for 2.1% of GDP and 8.5% of the labor force. Potatoes and citrus are the principal export crops. 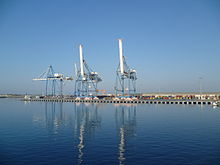 Port of Limassol, the busiest in Cyprus.

After robust growth rates in the 1980s (average annual growth was 6.1%), economic performance in the 1990s was mixed: real GDP growth was 9.7% in 1992, 1.7% in 1993, 6.0% in 1994, 6.0% in 1995, 1.9% in 1996 and 2.3% in 1997. This pattern underlined the economy's vulnerability to swings in tourist arrivals (i.e., to economic and political conditions in Cyprus, Western Europe, and the Middle East) and the need to diversify the economy. Declining competitiveness in tourism and especially in manufacturing are expected to act as a drag on growth until structural changes are effected. Overvaluation of the Cypriot pound prior to the adoption of the euro in 2008 had kept inflation in check.

Trade is vital to the Cypriot economy—the island is not self-sufficient in food and has few natural resources—and the trade deficit continues to grow. Cyprus must import fuels, most raw materials, heavy machinery, and transportation equipment. More than 50% of its trade is with the rest of the European Union, especially Greece and the United Kingdom, while the Middle East receives 20% of exports. In 1991, Cyprus introduced a Value Added Tax (VAT), which is currently 15% in line with the EU minimum. Cyprus ratified the new world trade agreement (General Agreement on Tariffs and Trade, GATT) in 1995 and began implementing it fully on 1 January 1996. 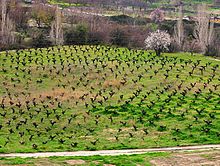 A vineyard in the Troodos Mountains. The agricultural sector continues to employ a significant proportion of the labor force.

EU accession negotiations started on 31 March 1998, and concluded when Cyprus joined the organization as a full member in 2004.

Bank of Cyprus offices in Aglandjia suberb of Nicosia

Cyprus has the fourth-largest ship registry in the world, with 2,758 ships and 25.5 million gross registered tons (GRTs). It is an open registry and includes ships from more than 43 countries, including Greece, Germany, and Russia.

In February 1997, the government revised its policy on foreign direct investment, permitting 100% foreign ownership in certain cases. Regulations on foreign portfolio investment in the Cyprus Stock Exchange have also been liberalized. Additionally, Cyprus passed a modern banking law in July 1997, incorporating all the provisions and directives of the EU for the prudential supervision of credit institutions.

Cyprus has concluded treaties on double taxation with 26 countries, and has removed exchange restrictions on current international transactions. Non-residents and foreign investors may freely repatriate proceeds from investments in Cyprus.

Economy in the Turkish-occupied area

The economy of Turkish-occupied northern Cyprus is about one-fifth the size of the economy of the government-controlled area, while GDP per capita is around one-third. Because the de facto administration is recognized only by Turkey, it has had much difficulty arranging foreign financing, and foreign firms have hesitated to invest there. The economy mainly revolves around the agricultural sector and government service, which together employ about half of the work force. The tourism sector also contributes substantially into the economy. Moreover, the small economy has seen some downfalls because the Turkish lira is legal tender. To compensate for the economy's weakness, Turkey has been known to provide significant financial aid. In both parts of the island, water shortage is a growing problem, and several desalination plants are planned.

The economic disparity between the two communities is pronounced. Although the economy operates on a free-market basis, the lack of private and government investment, shortages of skilled labor and experienced managers, and inflation and the devaluation of the Turkish lira continue to plague the economy.

Turkey is by far the main trading partner of the Turkish-occupied area, supplying 55% of imports and absorbing 48% of exports. In a landmark case, the European Court of Justice (ECJ) ruled on 5 July 1994 against the British practice of importing produce from northern Cyprus based on certificates of origin and phytosanitary certificates granted by the de facto authorities. The ECJ decided that only goods bearing certificates of origin from the internationally recognized Republic of Cyprus could be imported by EU member states. The decision resulted in a considerable decrease of Turkish Cypriot exports to the EU: from $36.4 million (or 66.7% of total Turkish Cypriot exports) in 1993 to $24.7 million in 1996 (or 35% of total exports) in 1996. Even so, the EU continues to be the second-largest trading partner of northern Cyprus, with a 24.7% share of total imports and 35% share of total exports.

Assistance from Turkey is the mainstay of the Turkish Cypriot economy. Under the latest economic protocol (signed 3 January 1997), Turkey has undertaken to provide loans totalling $250 million for the purpose of implementing projects included in the protocol related to public finance, tourism, banking, and privatization. Fluctuation in the Turkish lira, which suffered from hyperinflation every year until its replacement by the Turkish new lira in 2005, exerted downward pressure on the Turkish Cypriot standard of living for many years.