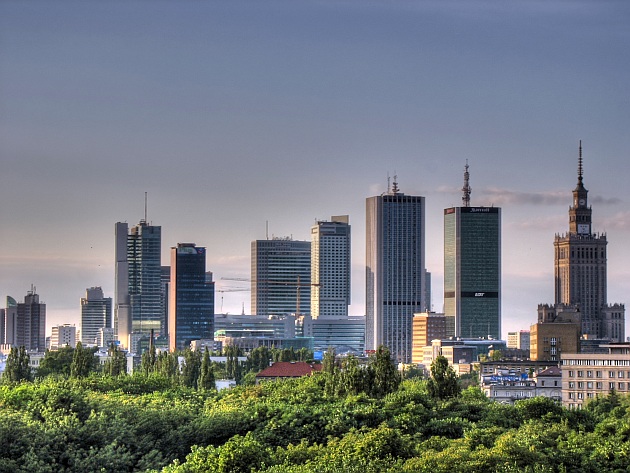 is considered to currently have one of the fastest growing economies in an nations, with an annual growth rate of over 6.0%. [ [http://www.forbes.com/markets/2007/09/24/poland-electrabel-vattenfall-markets-equity-cx_vr_0924markets10.html Tapping Into Polish Power - Forbes.com ] ] Poland has steadfastly pursued a policy of economic liberalization throughout the 1990s, with positive results for economic growth but negative results for some sectors of the population. The of small and medium state-owned companies and a liberal law on establishing new firms has encouraged the development of the private business sector, which has been the main drive for Poland's economic growth. The agricultural sector remains handicapped by structural problems, surplus labor, inefficient small farms, and a lack of investment. Restructuring and privatization of "sensitive sectors" (e.g., coal), has also been slow, but recent foreign investments in energy and steel have begun to turn the tide. Recent reforms in health care, education, the pension system, and state administration have resulted in larger than expected fiscal pressures. Improving this account deficit and tightening monetary policy, with focus on inflation, are priorities for the Polish government. Further progress in public finance depends mainly on privatization of Poland's remaining state sectors, the reduction of state employment, and an overhaul of the tax code to incorporate farmers, who currently pay significantly lower taxes than other people with similar income levels. Despite some continued systematic problems, Poland has made a tremendous overall economic progress over the last decade, and now is ranked 21st worldwide in terms of the GDP. With the largest component of its economy being the service sector, and the continued forecasts of positive economic growth, Poland is likely to continue to move up in the world GDP ranking.

The economic reforms of the introduced in 1990 removed , eliminated most to industry, opened markets to international competition, and imposed strict budgetary and monetary discipline. Poland was the first former centrally in to end its recession and return to growth in the early 1990s. Since 1992, the Polish economy has enjoyed an accelerated recovery, although growth has recently slowed. The private sector now accounts for over two-thirds of the GDP.

As a result of Poland's growth and investment-friendly climate, the country has received over $50 billion in direct since 1990. However, the government continues to play a strong role in the economy, as seen in excessive and the high level of politicization in many business decisions. Investors complain that state regulation is not transparent or predictable; the economy suffers from a lack of competition in many sectors, notably . In early 2002, the government announced a new set of economic reforms, designed in many ways to complete the process launched in 1990. The package acknowledges the need to improve Poland's investment climate, particularly the conditions for small and medium-sized enterprises, and better prepare the economy to compete as a member of the . The government also aims to improve Poland's public finances to prepare for adoption of the (planned 2012 [cite web | url=http://www.forbes.com/afxnewslimited/feeds/afx/2008/09/18/afx5440142.html | title=Poland may hold euro referendum in 2010-Deputy PM | publisher= | accessdate=2008-09-19] [cite web | url=http://www.guardian.co.uk/business/feedarticle/7799421 | title=Poland may push back euro rollout to 2012 | publisher= | accessdate=2008-09-19] [cite web | url=http://www.bizpoland.pl/news/index.php?contentid=172545 | title=Poland may push back euro rollout to 2012 | publisher=BizPoland | accessdate=2008-09-19] ).

With the collapse of the ruble-based trading bloc in 1991, Poland scrambled to reorient its trade. As early as 1996, 70% of its trade was with EU members, and neighboring today is Poland's dominant trading partner. Poland joined the EU in May 2004. Before that, it fostered regional integration and trade through the (CEFTA), which included , the , and .

Most of Poland's imports are capital goods needed for industrial retooling and for manufacturing inputs, rather than imports for consumption. Therefore, a deficit is expected and should even be regarded as positive at this point. Poland is a member of the and the . It applies the EU's common external tariff to goods from other countries (including the U.S.). Most Polish exports to the U.S. receive tariff benefits under the (GSP) program.

Opportunities for trade and investment continue to exist across virtually all sectors. The American Chamber of Commerce in Poland, founded in 1991 with seven members, now has more than 300 members. Strong economic growth potential, a large domestic market, EU membership, and a high level of political stability are the top reasons U.S. and other foreign companies do business in Poland.

Polish law is rather favorable to foreign entrepreneurs. The government offers investors various forms of state aid, such as: CIT tax at the level of 19% and investment incentives in 14 Special Economic Zones (among others: income tax exemption, real estate tax exemption, competitive land prices), several industrial and technology parks, the possibility to benefit from the EU structural funds, brownfield and greenfield localizations. According to the National Bank of Poland (NBP) the level of FDI inflow into Poland in 2006 amounted to 13,9 billion Euro.

One of the main reasons why investors tend to choose Poland is its location at the very heart of continental Europe, part of the trans European road network and easy access to 250 million consumers within a radius of 1000 kilometers. Poland is a significant market of 38 million consumers driving 10% annual retail market growth. In the first quarter of 2007 Polish economy recorded the GDP growth at 7%, which makes it twice that of the EU average.

According to the Ernst & Young report, Poland ranks 7th in the world in terms of investment attractiveness. According to the OECD (www.oecd.org) report, in 2004 Poles were one of the hardest working nations in Europe. In the first half of 2007 the indicator of detected economic crimes was 95,3%. It is estimated that the selection of Poland as the co-organizer of the European Football Championships in 2012 will speed up a lot of investments carried out in Poland in the coming years. It will mainly be the investment in sectors such as road, railway and air infrastructure, as well as in the hotel, tourism, gastronomy and recreation industry.

Polish government has a specialized body that deals with foreign investors. Polish Information and Foreign Investment Agency offers support for foreign investors - assists and helps investors in all the necessary legal and administrative procedures.

Before , Poland's industrial base was concentrated in the coal, textile, chemical, machinery, iron, and steel sectors. Today it extends to fertilizers, petrochemicals, machine tools, electrical machinery, electronics, cars and shipbuilding.

Poland's industrial base suffered greatly during World War II, and many resources were directed toward reconstruction. The communist imposed in the late 1940s created large and unwieldy economic structures operated under a tight central command. In part because of this systemic rigidity, the economy performed poorly even in comparison with other economies in central Europe.

In 1990, the began a comprehensive reform program to replace the centralized command economy with a market-oriented system. While the results overall have been impressive, many large state-owned industrial enterprises, particularly the railroad and the mining, steel, and defense sectors, have remained resistant to the change and downsizing required to survive in a market-based economy.

Agriculture employs 16.1% of the work force but contributes only 3.8% to the gross domestic product (GDP), reflecting relatively low productivity. Unlike the industrial sector, Poland's agricultural sector remained largely in private hands during the decades of communist rule. Most of the former state farms are now leased to farmer tenants. Lack of credit is hampering efforts to sell former state farmland. Currently, Poland's 2 million private farms occupy 90% of all farmland and account for roughly the same percentage of total agricultural production. Farms are small—8 hectares on average—and often fragmented. Farms with an area exceeding 15 ha accounted for only 9% of the total number of farms but cover 45% of total agricultural area. Over half of all farm households in Poland produce only for their own needs with little, if any, commercial sales.

Poland is a net exporter of processed fruit and vegetables, meat, and dairy products. Processors often rely on imports to supplement domestic supplies of wheat, feed grains, vegetable oil, and protein meals, which are generally insufficient to meet domestic demand. However, Poland is the leading producer in Europe of potatoes and rye and is one of the world's largest producers of sugar beets and triticale. Poland also is a significant producer of rapeseed, grains, hogs, and cattle. Attempts to increase domestic feed grain production are hampered by the short growing season, poor soil, and the small size of farms.

Poland entered the European Union on .