Economy of the Czech Republic

Economy of the Czech Republic 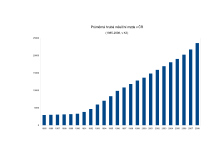 Of the emerging democracies in central and eastern Europe, the Czech Republic has one of the most developed industrialized economies. It is one of the most stable and prosperous of the post-Communist states of Central and Eastern Europe. GDP per capita at purchasing power parity was $26,100 in 2008, which is 82% of the EU average.

Its strong industrial tradition dates to the 19th century, when Bohemia and Moravia were the economic heartland of the Austro-Hungarian Empire. Today, this heritage is both an asset and a liability. The Czech Republic has a well-educated population and a well-developed infrastructure, but its industrial plants and much of its industrial equipment are obsolete.

According to the Stalinist development policy of planned interdependence, all the economies of the socialist countries were linked tightly with that of the Soviet Union. With the disintegration of the communist economic alliance in 1991, Czech manufacturers lost their traditional markets among former communist countries to the east.

The "Velvet Revolution" in 1989, offered a chance for profound and sustained political and economic reform. Signs of economic resurgence began to appear in the wake of the shock therapy that the International Monetary Fund (IMF) labelled the "big bang" of January 1991. Since then, consistent liberalization and astute economic management has led to the removal of 95% of all price controls, low unemployment, a positive balance of payments position, a stable exchange rate, a shift of exports from former communist economic bloc markets to Western Europe, and relatively low foreign debt. Inflation has been higher than in some other countries - mostly in the 10% range[citation needed] - and the government has run consistent modest budget deficits[citation needed].

Two government priorities have been strict fiscal policies and creating a good climate for incoming investment in the republic. Following a series of currency devaluations, the crown has remained stable in relation to the U.S. dollar[citation needed]. The Czech crown became fully convertible for most business purposes in late 1995.

In order to stimulate the economy and attract foreign partners, the government has revamped the legal and administrative structure governing investment. With the breakup of the Soviet Union, the country, till that point highly dependent on exports to the USSR, had to make a radical shift in economic outlook: away from the East, and towards the West. This necessitated the restructuring of existing banking and telecommunications facilities, as well as adjusting commercial laws and practices to fit Western standards. Further minimizing reliance on a single major partner, successive Czech governments have welcomed U.S. investment (amongst others) as a counter-balance to the strong economic influence of Western European partners, especially of their powerful neighbour, Germany. Although foreign direct investment (FDI) runs in uneven cycles, with a 12.9% share of total FDI between 1990 and March 1998, the U.S. was the third-largest foreign investor in the Czech economy, behind Germany and the Netherlands.

Progress toward creating a stable investment climate was recognized when the Czech Republic to become the first post-communist country to receive an investment-grade credit rating by international credit institutions[citation needed].

The republic boasts a flourishing consumer production sector and has privatized most state-owned heavy industries through the voucher privatization system. Under the system, every citizen was given the opportunity to buy, for a moderate price, a book of vouchers that represents potential shares in any state-owned company. The voucher holders could then invest their vouchers, increasing the capital base of the chosen company, and creating a nation of citizen share-holders. This is in contrast to Russian privatization, which consisted of sales of communal assets to private companies rather than share-transfer to citizens. The effect of this policy has been dramatic. Under communism, state ownership of businesses was estimated to be 97%[citation needed]. Privatization through restitution of real estate to the former owners was largely completed in 1992. By 1998, more than 80% of enterprises were in private hands. Now completed[citation needed], the program has made Czechs, who own shares of each of the Czech companies, one of the highest per-capita share owners in the world[citation needed].

The republic's economic transformation was far from complete. Political and financial crises in 1997, shattered the Czech Republic's image as one of the most stable and prosperous of post-Communist states. Delays in enterprise restructuring and failure to develop a well-functioning capital market played major roles in Czech economic troubles, which culminated in a currency crisis in May. The formerly pegged currency was forced into a floating system as investors sold their Korunas faster than the government could buy them. This followed a worldwide trend to divest from developing countries that year. Investors also worried the republic's economic transformation was far from complete. Another complicating factor was the current account deficit, which reached nearly 8% of GDP.

In response to the crisis, two austerity packages were introduced later in the spring (called vernacularly "The Packages"), which cut government spending by 2.5% of GDP. Growth dropped to 0.3% in 1997, -2.3% in 1998, and -0.5% in 1999. The government established a restructuring agency in 1999 and launched a revitalization program - to spur the sale of firms to foreign companies. Key priorities included accelerating legislative convergence with EU norms, restructuring enterprises, and privatising banks and utilities. The economy, fueled by increased export growth and investment, was expected to recover by 2000.

Growth in 2000-05 was supported by exports to the EU, primarily to Germany, and a strong recovery of foreign and domestic investment. Domestic demand is playing an ever more important role in underpinning growth as interest rates drop and the availability of credit cards and mortgages increases. Current account deficits of around 5% of GDP are beginning to decline as demand for Czech products in the European Union increases. Inflation is under control. Recent accession to the EU gives further impetus and direction to structural reform. In early 2004 the government passed increases in the Value Added Tax (VAT) and tightened eligibility for social benefits with the intention to bring the public finance gap down to 4% of GDP by 2006, but more difficult pension and healthcare reforms will have to wait until after the next elections. Privatization of the state-owned telecommunications firm Český Telecom took place in 2005. Intensified restructuring among large enterprises, improvements in the financial sector, and effective use of available EU funds should strengthen output growth.

Growth continued in the first years of the EU membership. The credit portion of the Financial crisis of 2007–2010 did not affect the Czech Republic much, mostly due to its stable banking sector which has learned its lessons during a smaller crisis in the late 1990s and became much more cautious. As a fraction of the GDP, the Czech public debt belongs among the smallest ones in Central and Eastern Europe. Moreover, unlike many other post-communist countries, an overwhelming majority of the household debt - over 99% - is denominated in the local Czech currency. That's why the country wasn't affected by the shrunken money supply in the U.S. dollars.

However, as a large exporter, the economy was sensitive to the decrease of the demand in Germany and other trading partners. In the middle of 2009, the annual drop of the GDP for 2009 was estimated around 3% or 4.3%,[6] a relatively modest decrease. The impact of the economic crisis may have been limited by the existence of the national currency that temporarily weakened in H1 of 2009, simplifying the life of the exporters.

The Czech Republic is reducing its dependence on highly polluting low-grade brown coal as a source of energy. Nuclear power presently provides about 30% of total power needs, and its share is projected to increase to 40%. Natural gas is procured from Russian Gazprom (roughly three-fourths of domestic consumption) and from Norwegian companies (most of the remaining one-fourth). Russian gas is imported via Ukraine (Friendship pipeline), Norwegian gas is transported through Germany. The gas consumption (approx. 100 TWh in 2003-5) is almost two times higher than the electricity consumption. South Moravia has a small amount of oil and gas deposits.

From the CIA World Factbook 2008 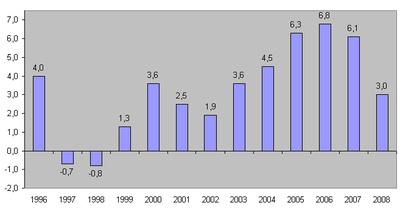 Annual change in volume of GDP of the Czech Republic