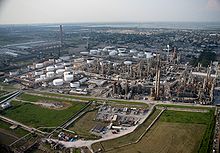 Oil refinery in Louisiana - an example of chemical industry

Polymers and plastics, especially polyethylene, polypropylene, polyvinyl chloride, polyethylene terephthalate, polystyrene and polycarbonate comprise about 80% of the industry’s output worldwide.[citation needed] Chemicals are used to make a wide variety of consumer goods, as well as thousands inputs to agriculture, manufacturing, construction, and service industries. The chemical industry itself consumes 26 percent of its own output.[citation needed] Major industrial customers include rubber and plastic products, textiles, apparel, petroleum refining, pulp and paper, and primary metals. Chemicals is nearly a $3 trillion global enterprise, and the EU and U.S. chemical companies are the world's largest producers.[citation needed] 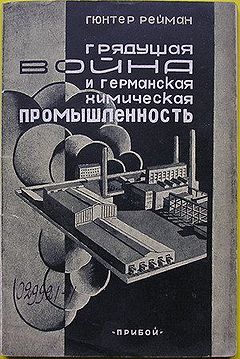 Sales of the chemical business can be divided into a few broad categories, including basic chemicals (about 35 to 37 percent of the dollar output), life sciences (30 percent), specialty chemicals (20 to 25 percent) and consumer products (about 10 percent).[citation needed]

Polymers, the largest revenue segment at about 33 percent of the basic chemicals dollar value, includes all categories of plastics and man-made fibers.[citation needed] The major markets for plastics are packaging, followed by home construction, containers, appliances, pipe, transportation, toys, and games.

The principal raw materials for polymers are bulk petrochemicals.[citation needed]

Chemicals in the bulk petrochemicals and intermediates are primarily made from liquefied petroleum gas (LPG), natural gas, and crude oil. Their sales volume is close to 30 percent of overall basic chemicals.[citation needed] Typical large-volume products include ethylene, propylene, benzene, toluene, xylenes, methanol, vinyl chloride monomer (VCM), styrene, butadiene, and ethylene oxide. These chemicals are the starting points for most polymers and other organic chemicals as well as much of the specialty chemicals category.

Other derivatives and basic industrials include synthetic rubber, surfactants, dyes and pigments, turpentine, resins, carbon black, explosives, and rubber products and contribute about 20 percent of the basic chemicals' external sales.

Inorganic chemicals (about 12 percent of the revenue output) make up the oldest of the chemical categories. Products include salt, chlorine, caustic soda, soda ash, acids (such as nitric acid, phosphoric acid, and sulfuric acid), titanium dioxide, and hydrogen peroxide.

Fertilizers are the smallest category (about 6 percent) and include phosphates, ammonia, and potash chemicals.

Life sciences (about 30 percent of the dollar output of the chemistry business) include differentiated chemical and biological substances, pharmaceuticals, diagnostics, animal health products, vitamins, and pesticides. While much smaller in volume than other chemical sectors, their products tend to have very high prices—over ten dollars per pound—growth rates of 1.5 to 6 times GDP, and research and development spending at 15 to 25 percent of sales. Life science products are usually produced with very high specifications and are closely scrutinized by government agencies such as the Food and Drug Administration. Pesticides, also called "crop protection chemicals", are about 10 percent of this category and include herbicides, insecticides, and fungicides.[citation needed]

Specialty chemicals are a category of relatively high valued, rapidly growing chemicals with diverse end product markets. Typical growth rates are one to three times GDP with prices over a dollar per pound. They are generally characterized by their innovative aspects. Products are sold for what they can do rather than for what chemicals they contain. Products include electronic chemicals, industrial gases, adhesives and sealants as well as coatings, industrial and institutional cleaning chemicals, and catalysts. Coatings make up about 15 percent of specialty chemicals sales, with other products ranging from 10 to 13 percent.[citation needed] Specialty Chemicals are sometimes referred to as "fine chemicals"

Consumer products include direct product sale of chemicals such as soaps, detergents, and cosmetics. Typical growth rates are 0.8 to 1.0 times GDP.

In the U.S. there are 170 major chemical companies.[citation needed] They operate internationally with more than 2,800 facilities outside the U.S. and 1,700 foreign subsidiaries or affiliates operating. The U.S. chemical output is $400 billion a year. The U.S. industry records large trade surpluses and employs more than a million people in the United States alone. The chemical industry is also the second largest consumer of energy in manufacturing and spends over $5 billion annually on pollution abatement.

The chemical industry has shown rapid growth for more than fifty years.[citation needed] The fastest-growing areas have involved the manufacture of synthetic organic polymers used as plastics, fibres and elastomers. Historically and presently the chemical industry has been concentrated in three areas of the world, Western Europe, North America and Japan (the Triad). The European Community remains the largest producer area followed by the USA and Japan.

The traditional dominance of chemical production by the Triad countries is being challenged by changes in feedstock availability and price, labour cost, energy cost, differential rates of economic growth and environmental pressures. Instrumental in the changing structure of the global chemical industry has been the growth in China, India, Korea, the Middle East, South East Asia, Nigeria, and Brazil. 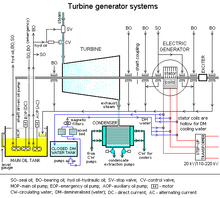 This is a process diagram of a turbine generator. Knowing how to design a sustainable process in which the system can withstand or manipulate process halting conditions such as; heat, fiction, pressure, emissions, contaminants, is essential for engineers working to produce a sustainable process for use in the chemical industry.

As accepted by chemical engineers, the chemical industry involves the use of chemical processes such as chemical reactions and refining methods to produce a wide variety of solid, liquid, and gaseous materials. Most of these products are used in manufacture of other items, although a smaller number are used directly by consumers. Solvents, pesticides, lye, washing soda, and portland cement are a few examples of product used by consumers.

The industry includes manufacturers of inorganic- and organic-industrial chemicals, ceramic products, petrochemicals, agrochemicals, polymers and rubber (elastomers), oleochemicals (oils, fats, and waxes), explosives, fragrances and flavors. Examples of these products are shown in the Table below. 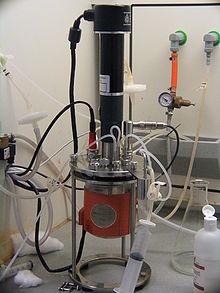 The novel chemical reactor reduces the amount of solvents used from 1000 litres to just 4 litres.

Although the pharmaceutical industry is often considered[who?] a chemical industry , it has many different characteristics that puts it in a separate category. Other closely related industries include petroleum, glass, paint, ink, sealant, adhesive, and food processing manufacturers.

Chemical processes such as chemical reactions are used in chemical plants to form new substances in various types of reaction vessels. In many cases the reactions are conducted in special corrosion resistant equipment at elevated temperatures and pressures with the use of catalysts. The products of these reactions are separated using a variety of techniques including distillation especially fractional distillation, precipitation, crystallization, adsorption, filtration, sublimation, and drying.

The processes and product or products are usually tested during and after manufacture by dedicated instruments and on-site quality control laboratories to ensure safe operation and to assure that the product will meet required specifications. The products are packaged and delivered by many methods, including pipelines, tank-cars, and tank-trucks (for both solids and liquids), cylinders, drums, bottles, and boxes. Chemical companies often have a research and development laboratory for developing and testing products and processes. These facilities may include pilot plants, and such research facilities may be located at a site separate from the production plant(s).

Chandler (2005) argues the relative success or failure of American and European chemical companies is explained with reference to three themes: "barriers to entry," "strategic boundaries," and "limits to growth." He says successful chemical firms followed definite "paths of learning" whereby first movers and close followers created entry barriers to would-be rivals by building "integrated learning bases" (or organizational capabilities) which enabled them to develop, produce, distribute, and sell in local and then worldwide markets. Also they followed a "virtuous strategy" of reinvestment of retained earnings and growth through diversification, particularly to utilize "dynamic" scale and scope economies relating to new learning in launching "next generation" products.

Companies in the 21st century

Just as companies emerge as the main producers of the chemical industry, we can also look on a more global scale to how industrialized countries rank, with regards to the billions of dollars worth of production a country or region could export. Though the business of chemistry is worldwide in scope, the bulk of the world’s $3.7 trillion chemical output is accounted for by only a handful of industrialized nations. The United States alone produced $689 billion, 18.6 percent of the total world chemical output in 2008.[2]