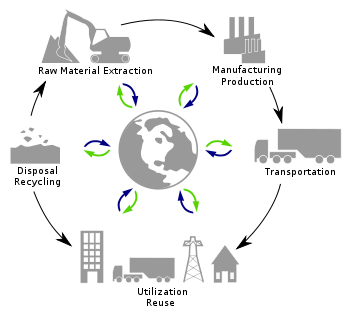 Assembly of Section 41 of a Boeing 787 Dreamliner

Manufacturing is the use of machines, tools and labor to produce goods for use or sale. The term may refer to a range of human activity, from handicraft to high tech, but is most commonly applied to industrial production, in which raw materials are transformed into finished goods on a large scale. Such finished goods may be used for manufacturing other, more complex products, such as aircraft, household appliances or automobiles, or sold to wholesalers, who in turn sell them to retailers, who then sell them to end users – the "consumers".

Modern manufacturing includes all intermediate processes required for the production and integration of a product's components. Some industries, such as semiconductor and steel manufacturers use the term fabrication instead.

The manufacturing sector is closely connected with engineering and industrial design. Examples of major manufacturers in North America include General Motors Corporation, General Electric, and Pfizer. Examples in Europe include Volkswagen Group, Siemens, and Michelin. Examples in Asia include Toyota, Samsung, and Bridgestone.

According to some economists, manufacturing is a wealth-producing sector of an economy, whereas a service sector tends to be wealth-consuming.[1][2] Emerging technologies have provided some new growth in advanced manufacturing employment opportunities in the Manufacturing Belt in the United States. Manufacturing provides important material support for national infrastructure and for national defense.

On the other hand, most manufacturing may involve significant social and environmental costs. The clean-up costs of hazardous waste, for example, may outweigh the benefits of a product that creates it. Hazardous materials may expose workers to health risks. Developed countries regulate manufacturing activity with labor laws and environmental laws. Across the globe, manufacturers can be subject to regulations and pollution taxes to offset the environmental costs of manufacturing activities. Labor Unions and craft guilds have played a historic role in the negotiation of worker rights and wages. Environment laws and labor protections that are available in developed nations may not be available in the third world. Tort law and product liability impose additional costs on manufacturing.

Surveys and analyses of trends and issues in manufacturing and investment around the world focus on such things as:

In addition to general overviews, researchers have examined the features and factors affecting particular key aspects of manufacturing development. They have compared production and investment in a range of Western and non-Western countries and presented case studies of growth and performance in important individual industries and market-economic sectors.[4][5]

On June 26, 2009, Jeff Immelt, the CEO of General Electric, called for the United States to increase its manufacturing base employment to 20% of the workforce, commenting that the U.S. has outsourced too much in some areas and can no longer rely on the financial sector and consumer spending to drive demand.[6] A total of 3.2 million – one in six U.S. manufacturing jobs – have disappeared between 2000 and 2007.[7] In the UK, EEF the manufacturers organisation has led calls for the UK economy to be rebalanced to rely less on financial services and has actively promoted the manufacturing agenda.