Educational software is computer software, the primary purpose of which is teaching or self-learning.

The use of computer hardware and software in education and training dates to the early 1940s, when American researchers developed flight simulators which used analog computers to generate simulated onboard instrument data. One such system was the type19 synthetic radar trainer, built in 1943. From these early attempts in the WWII era through the mid 1970s, educational software was directly tied to the hardware, usually mainframe computers, on which it ran. Pioneering educational computer systems in this era included the PLATO system (1960), developed at the University of Illinois, and TICCIT (1969). In 1963, IBM had established a partnership with Stanford University's College for Mathematical Studies in the Social Sciences (IMSSS), directed by Patrick Suppes, to develop the first comprehensive CAI elementary school curriculum which was implemented on a large scale in schools in both California and Mississippi.[1] In 1967 Computer Curriculum Corporation (CCC, now Pearson Education Technologies[2]) was formed to market to schools the materials developed through the IBM partnership. Early terminals that ran educational systems cost over $10,000, putting them out of reach of most institutions. Some programming languages from this period, particularly BASIC (1963), and LOGO (1967) can also be considered educational, as they were specifically targeted to students and novice computer users. The PLATO IV system, released in 1972, supported many features which later became standard in educational software running on home computers. Its features included bitmap graphics, primitive sound generation, and support for non-keyboard input devices, including the touchscreen.

The arrival of the personal computer, with the Altair 8800 in 1975, changed the field of software in general, with specific implications for educational software. Whereas users prior to 1975 were dependent upon university or government owned mainframe computers with timesharing, users after this shift could create and use software for computers in homes and schools, computers available for less than $2000. By the early 1980s, the availability of personal computers including the Apple II (1977), Commodore PET (1977), Commodore VIC-20 (1980), and Commodore 64 (1982) allowed for the creation of companies and nonprofits which specialized in educational software. Brøderbund and The Learning Company are key companies from this period, and MECC, the Minnesota Educational Computing Consortium, a key non-profit software developer. These and other companies designed a range of titles for personal computers, with the bulk of the software initially developed for the Apple II.

Major developments in educational software in the early and mid 1990s were made possible by advances in computer hardware. Multimedia graphics and sound were increasingly used in educational programs. CD-ROMs became the preferred method for content delivery. With the spread of the internet in the second half of the 1990s, new methods of educational software delivery appeared. In the history of virtual learning environments, the 1990s were a time of growth for educational software systems, primarily due to the advent of the affordable computer and of the Internet. Today Higher Education institutions use virtual learning environments like Blackboard Inc. to provide greater accessibility to learners.

An immense number of titles, probably running into the thousands, were developed and released from the mid-1990s onwards, aimed primarily at the home education of younger children. Later iterations of these titles often began to link educational content to school curricula (such as England’s National Curriculum). The design of educational software programmes for home use has been influenced strongly by computer gaming concepts – in other words, they are designed to be fun as well as educational. However as far as possible a distinction should be drawn between proper learning titles (such as these) and software where the gaming outweighs the educational value (described later).

The following are examples of children’s learning software which have a structured pedagogical approach, usually orientated towards literacy and numeracy skills.

Courseware is a term that combines the words 'course' with 'software'. Its meaning originally was used to describe additional educational material intended as kits for teachers or trainers or as tutorials for students, usually packaged for use with a computer. The term's meaning and usage has expanded and can refer to the entire course and any additional material when used in reference an online or 'computer formatted' classroom. Many companies are using the term to describe the entire "package" consisting of one 'class' or 'course' bundled together with the various lessons, tests, and other material needed. The courseware itself can be in different formats, some are only available online such as html pages, while others can be downloaded in pdf files or other types of document files. Many forms of e-learning are now being blended with term courseware. Most leading educational companies solicit or include courseware with their training packages. In 1992 a company called SCORE! Educational Centers formed to deliver to individual consumers courseware based on personalization technology that was previously only available to select schools and the Education Program for Gifted Youth.[3]

Some educational software is designed for use in school classrooms. Typically such software may be projected onto a large whiteboard at the front of the class and/or run simultaneously on a network of desktop computers in a classroom. This type of software is often called classroom management software. While teachers often choose to use educational software from other categories in their IT suites (e.g. reference works, children’s software), a whole category of educational software has grown up specifically intended to assist classroom teaching. Branding has been less strong in this category than in those oriented towards home users. Software titles are often very specialised and produced by various manufacturers, including many established educational book publishers.

With the impact of environmental damage and the need for institutions to become "paperless" [4], more educational institutions are seeking alternative ways of assessment and testing, which has always traditionally been known to use up vasts amount of paper. Assessment software refers to software with a primary purpose of assessing and testing students in a virtual environment. Assessment software allows students to complete tests and examinations using a computer, usually networked. The software then scores each test transcript and outputs results for each student. Assessment software is available in various delivery methods, the most popular being self-hosted software, online software and hand-held voting systems. Proprietary software and open-source software systems are available. While technically falling into the Courseware category (see above), Moodle is an example of open-source software with an assessment component that is gaining popularity. Other popular international assessment systems include QuestionMark and EvaluNet XT.

In a broader sense, the term edutainment describes an intentional merger of computer games and educational software into a single product (and could therefore also comprise more serious titles described above under children’s learning software). In the narrower sense used here, the term describes educational software which is primarily about entertainment, but tends to educate as well and sells itself partly under the educational umbrella. Software of this kind is not structured towards school curricula, does not normally involve educational advisors, and does not focus on core skills such as literacy and numeracy. 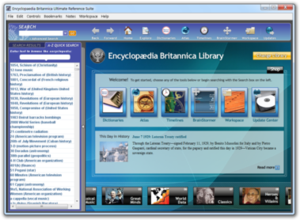 The first commercial reference software products were reformulations of existing content into CD-ROM editions, often supplemented with new multimedia content, including compressed video and sound. More recent products made use of internet technologies, to supplement CD-ROM products, then, more recently, to replace them entirely.

Wikipedia and its offspins (such as Wiktionary) marked a new departure in educational reference software. Previously, encyclopedias and dictionaries had compiled their contents on the basis of invited and closed teams of specialists. The Wiki concept has allowed for the development of collaborative reference works through open cooperation incorporating experts and non-experts.

Some manufacturers regarded normal personal computers as an inappropriate platform for learning software for younger children and produced custom child-friendly pieces of hardware instead. The hardware and software is generally combined into a single product, such as a child laptop-lookalike. The laptop keyboard for younger children follows an alphabetic order and the qwerty order for the older ones. The most well-known example are Leapfrog products. These include imaginatively designed hand-held consoles with a variety of pluggable educational game cartridges and book-like electronic devices into which a variety of electronic books can be loaded. These products are more portable than general laptop computers, but have a much more limited range of purposes, concentrating on literacy.

These are games which were originally developed for adults or older children and which have potential learning implications. For the most part, these games provide simulations of different kinds of human activities, allowing players to explore a variety of social, historical and economic processes.

Do games such as these qualify as edutainment? To do so, they would need to have been created with a clear educational intent. In their publicity material, the developers of these games such as these generally focus more on the 'fun' aspects of the games rather than their educational potential. This might be taken as evidence of an absence of educational intent. On the other hand, large amounts of information of an overtly educational nature may be found within the manuals of many of these games (for example, Europa Universalis, Railroad Tycoon and Rails Across America), suggesting that education was indeed very much in the minds of the developers. Accordingly, these games may be classified as edutainment.[original research?]

In any event, the games have been enthusiastically received in some educational circles and even passed into academic literature.[1].

Earlier educational software for the important corporate and tertiary education markets was designed to run on a single desktop computer (or an equivalent user device). The history of such software is usefully summarized in the SCORM 2004 2nd edition Overview (section 1.3), unfortunately, however, without precise dates. In the years immediately following 2000, planners decided to switch to server-based applications with a high degree of standardization. This means that educational software runs primarily on servers which may be hundreds or thousands of miles from the actual user. The user only receives tiny pieces of a learning module or test, fed over the internet one by one. The server software decides on what learning material to distribute, collects results and displays progress to teaching staff. Another way of expressing this change is to say that educational software morphed into an online educational service. US Governmental endorsements and approval systems ensured the rapid switch to the new way of managing and distributing learning material.

There are highly specific niche markets for educational software, including:

While mainstream operating systems are designed for general usages, and are more or less customized for education only by the application sets added to them, a variety of software manufacturers, especially Linux distributions, have sought to provide integrated platforms for specifically education. Among the most popular are Sugar, aimed primarily at preschool and elementary grades; Edubuntu, foremost targeted to middle and secondary grades; and, UberStudent, designed for the academic success of higher education and college-bound secondary students. In addition, Portos, designed by Cornell University, is a complete educational operating system designed to teach programming.[6]