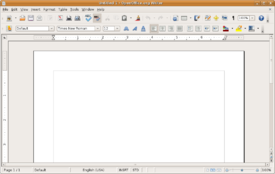 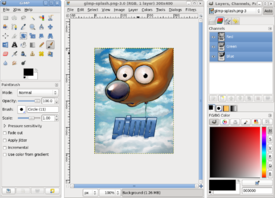 Application software, also known as an application or an "app", is computer software designed to help the user to perform specific tasks. Examples include enterprise software, accounting software, office suites, graphics software and media players. Many application programs deal principally with documents. Apps may be bundled with the computer and its system software, or may be published separately. Some users are satisfied with the bundled apps and need never install one.

Application software is contrasted with system software and middleware, which manage and integrate a computer's capabilities, but typically do not directly apply them in the performance of tasks that benefit the user. The system software serves the application, which in turn serves the user.

Similar relationships apply in other fields. For example, a shopping mall does not provide the merchandise a shopper is seeking, but provides space and services for retailers that serve the shopper. Rail tracks similarly support trains, allowing the trains to transport passengers.

Application software applies the power of a particular computing platform or system software to a particular purpose. Some apps such as Microsoft Office are available in versions for several different platforms; others have narrower requirements and are thus called, for example, a Geography application for Windows or an Android application for education or Linux gaming. Sometimes a new and popular application arises which only runs on one platform, increasing the desirability of that platform. This is called a killer application.

In information technology, an application is a computer program designed to help people perform an activity. An application thus differs from an operating system (which runs a computer), a utility (which performs maintenance or general-purpose chores), and a programming language (with which computer programs are created). Depending on the activity for which it was designed, an application can manipulate text, numbers, graphics, or a combination of these elements. Some application packages offer considerable computing power by focusing on a single task, such as word processing; others, called integrated software, offer somewhat less power but include several applications.[1] User-written software tailors systems to meet the user's specific needs. User-written software include spreadsheet templates, word processor macros, scientific simulations, graphics and animation scripts. Even email filters are a kind of user software. Users create this software themselves and often overlook how important it is.

The delineation between system software such as operating systems and application software is not exact, however, and is occasionally the object of controversy. For example, one of the key questions in the United States v. Microsoft antitrust trial was whether Microsoft's Internet Explorer web browser was part of its Windows operating system or a separable piece of application software. As another example, the GNU/Linux naming controversy is, in part, due to disagreement about the relationship between the Linux kernel and the operating systems built over this kernel. In some types of embedded systems, the application software and the operating system software may be indistinguishable to the user, as in the case of software used to control a VCR, DVD player or microwave oven. The above definitions may exclude some applications that may exist on some computers in large organizations. For an alternative definition of an app: see Application Portfolio Management.

There are many types of application software:

Applications can also be classified by computing platform.