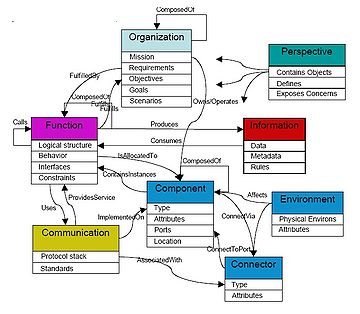 Example of a constructed MBED Top Level Ontology based on the Nominal set of views.[1]

Ontology engineering in computer science and information science is a new field, which studies the methods and methodologies for building ontologies: formal representations of a set of concepts within a domain and the relationships between those concepts. A large scale representation of abstract concepts such as actions, time, physical objects and beliefs would be an example of ontological engineering.[citation needed]

Ontologies provide a common vocabulary of an area and define, with different levels of formality, the meaning of the terms and the relationships between them. During the last decade, increasing attention has been focused on ontologies. Ontologies are now widely used in knowledge engineering, artificial intelligence and computer science; in applications related to areas such as knowledge management, natural language processing, e-commerce, intelligent information integration, bio-informatics, education; and in new emerging fields like the semantic web. Ontological engineering is a new field of study concerning the ontology development process, the ontology life cycle, the methods and methodologies for building ontologies,[3][4] and the tool suites and languages that support them.

An ontology language is a formal language used to encode the ontology. There are a number of such languages for ontologies, both proprietary and standards-based:

Life sciences is flourishing with ontologies that biologists use to make sense of their experiments. For inferring correct conclusions from experiments, ontologies have to be structured optimally against the knowledge base they represent. The structure of an ontology needs to be changed continuously so that it is an accurate representation of the underlying domain.

Recently, an automated method was introduced for engineering ontologies in life sciences such as Gene Ontology (GO),[5] one of the most successful and widely used biomedical ontology.[6] Based on information theory, it restructures ontologies so that the levels represent the desired specificity of the concepts. Similar information theoretic approaches have also been used for optimal partition of Gene Ontology.[7] Given the mathematical nature of such engineering algorithms, these optimizations can be automated to produce a principled and scalable architecture to restructure ontologies such as GO.