Within software engineering, programming (the implementation) is regarded as one phase in a software development process.

There is an ongoing debate on the extent to which the writing of programs is an art, a craft or an engineering discipline.[1] In general, good programming is considered to be the measured application of all three, with the goal of producing an efficient and evolvable software solution (the criteria for "efficient" and "evolvable" vary considerably). The discipline differs from many other technical professions in that programmers, in general, do not need to be licensed or pass any standardized (or governmentally regulated) certification tests in order to call themselves "programmers" or even "software engineers." Because the discipline covers many areas, which may or may not include critical applications, it is debatable whether licensing is required for the profession as a whole. In most cases, the discipline is self-governed by the entities which require the programming, and sometimes very strict environments are defined (e.g. United States Air Force use of AdaCore and security clearance). However, representing oneself as a "Professional Software Engineer" without a license from an accredited institution is illegal in many parts of the world.

Another ongoing debate is the extent to which the programming language used in writing computer programs affects the form that the final program takes. This debate is analogous to that surrounding the Sapir–Whorf hypothesis[2] in linguistics and cognitive science, which postulates that a particular spoken language's nature influences the habitual thought of its speakers. Different language patterns yield different patterns of thought. This idea challenges the possibility of representing the world perfectly with language, because it acknowledges that the mechanisms of any language condition the thoughts of its speaker community. 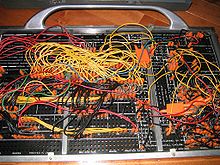 The Antikythera mechanism from ancient Greece was a calculator utilizing gears of various sizes and configuration to determine its operation,[3] which tracked the metonic cycle still used in lunar-to-solar calendars, and which is consistent for calculating the dates of the Olympiads.[4] Al-Jazari built programmable Automata in 1206. One system employed in these devices was the use of pegs and cams placed into a wooden drum at specific locations. which would sequentially trigger levers that in turn operated percussion instruments. The output of this device was a small drummer playing various rhythms and drum patterns.[5][6] The Jacquard Loom, which Joseph Marie Jacquard developed in 1801, uses a series of pasteboard cards with holes punched in them. The hole pattern represented the pattern that the loom had to follow in weaving cloth. The loom could produce entirely different weaves using different sets of cards. Charles Babbage adopted the use of punched cards around 1830 to control his Analytical Engine. The synthesis of numerical calculation, predetermined operation and output, along with a way to organize and input instructions in a manner relatively easy for humans to conceive and produce, led to the modern development of computer programming. Development of computer programming accelerated through the Industrial Revolution.

In the late 1880s, Herman Hollerith invented the recording of data on a medium that could then be read by a machine. Prior uses of machine readable media, above, had been for control, not data. "After some initial trials with paper tape, he settled on punched cards..."[7] To process these punched cards, first known as "Hollerith cards" he invented the tabulator, and the keypunch machines. These three inventions were the foundation of the modern information processing industry. In 1896 he founded the Tabulating Machine Company (which later became the core of IBM). The addition of a control panel (plugboard) to his 1906 Type I Tabulator allowed it to do different jobs without having to be physically rebuilt. By the late 1940s, there were a variety of control panel programmable machines, called unit record equipment, to perform data-processing tasks. 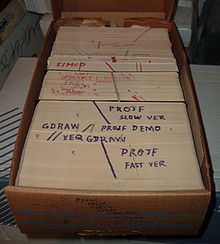 Data and instructions could be stored on external punched cards, which were kept in order and arranged in program decks.

In 1954, FORTRAN was invented; it was the first high level programming language to have a functional implementation, as opposed to just a design on paper.[8][9] (A high-level language is, in very general terms, any programming language that allows the programmer to write programs in terms that are more abstract than assembly language instructions, i.e. at a level of abstraction "higher" than that of an assembly language.) It allowed programmers to specify calculations by entering a formula directly (e.g. Y = X*2 + 5*X + 9). The program text, or source, is converted into machine instructions using a special program called a compiler, which translates the FORTRAN program into machine language. In fact, the name FORTRAN stands for "Formula Translation". Many other languages were developed, including some for commercial programming, such as COBOL. Programs were mostly still entered using punched cards or paper tape. (See computer programming in the punch card era). By the late 1960s, data storage devices and computer terminals became inexpensive enough that programs could be created by typing directly into the computers. Text editors were developed that allowed changes and corrections to be made much more easily than with punched cards. (Usually, an error in punching a card meant that the card had to be discarded and a new one punched to replace it.)

As time has progressed, computers have made giant leaps in the area of processing power. This has brought about newer programming languages that are more abstracted from the underlying hardware. Although these high-level languages usually incur greater overhead, the increase in speed of modern computers has made the use of these languages much more practical than in the past. These increasingly abstracted languages typically are easier to learn and allow the programmer to develop applications much more efficiently and with less source code. However, high-level languages are still impractical for a few programs, such as those where low-level hardware control is necessary or where maximum processing speed is vital.

Throughout the second half of the twentieth century, programming was an attractive career in most developed countries. Some forms of programming have been increasingly subject to offshore outsourcing (importing software and services from other countries, usually at a lower wage), making programming career decisions in developed countries more complicated, while increasing economic opportunities in less developed areas. It is unclear how far this trend will continue and how deeply it will impact programmer wages and opportunities.[citation needed]

Whatever the approach to software development may be, the final program must satisfy some fundamental properties. The following properties are among the most relevant:

In computer programming, readability refers to the ease with which a human reader can comprehend the purpose, control flow, and operation of source code. It affects the aspects of quality above, including portability, usability and most importantly maintainability.

Readability is important because programmers spend the majority of their time reading, trying to understand and modifying existing source code, rather than writing new source code. Unreadable code often leads to bugs, inefficiencies, and duplicated code. A study[10] found that a few simple readability transformations made code shorter and drastically reduced the time to understand it.

The academic field and the engineering practice of computer programming are both largely concerned with discovering and implementing the most efficient algorithms for a given class of problem. For this purpose, algorithms are classified into orders using so-called Big O notation, O(n), which expresses resource use, such as execution time or memory consumption, in terms of the size of an input. Expert programmers are familiar with a variety of well-established algorithms and their respective complexities and use this knowledge to choose algorithms that are best suited to the circumstances.

Popular modeling techniques include Object-Oriented Analysis and Design (OOAD) and Model-Driven Architecture (MDA). The Unified Modeling Language (UML) is a notation used for both the OOAD and MDA. 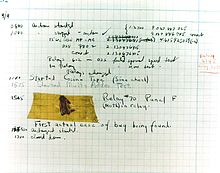 Debugging is a very important task in the software development process, because an incorrect program can have significant consequences for its users. Some languages are more prone to some kinds of faults because their specification does not require compilers to perform as much checking as other languages. Use of a static code analysis tool can help detect some possible problems.

Debugging is often done with IDEs like Eclipse, Kdevelop, NetBeans, Code::Blocks, and Visual Studio. Standalone debuggers like gdb are also used, and these often provide less of a visual environment, usually using a command line.

Different programming languages support different styles of programming (called programming paradigms). The choice of language used is subject to many considerations, such as company policy, suitability to task, availability of third-party packages, or individual preference. Ideally, the programming language best suited for the task at hand will be selected. Trade-offs from this ideal involve finding enough programmers who know the language to build a team, the availability of compilers for that language, and the efficiency with which programs written in a given language execute. Languages form an approximate spectrum from "low-level" to "high-level"; "low-level" languages are typically more machine-oriented and faster to execute, whereas "high-level" languages are more abstract and easier to use but execute less quickly. It is usually easier to code in "high-level" languages than in "low-level" ones.

Allen Downey, in his book How To Think Like A Computer Scientist, writes:

The details look different in different languages, but a few basic instructions appear in just about every language:

Many computer languages provide a mechanism to call functions provided by libraries such as in a .so. Provided the functions in a library follow the appropriate run time conventions (e.g., method of passing arguments), then these functions may be written in any other language.

Computer programmers are those who write computer software. Their jobs usually involve: