The large and growing body of software development organizations implement process methodologies. Many of them are in the defense industry, which in the U.S. requires a rating based on 'process models' to obtain contracts.

The international standard for describing the method of selecting, implementing and monitoring the life cycle for software is ISO/IEC 12207. 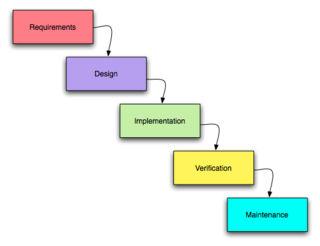 The activities of the software development process represented in the waterfall model. There are several other models to represent this process.

An important task in creating a software program is extracting the requirements or requirements analysis. Customers typically have an abstract idea of what they want as an end result, but not what software should do. Incomplete, ambiguous, or even contradictory requirements are recognized by skilled and experienced software engineers at this point. Frequently demonstrating live code may help reduce the risk that the requirements are incorrect.

Once the general requirements are gathered from the client, an analysis of the scope of the development should be determined and clearly stated. This is often called a scope document.

Certain functionality may be out of scope of the project as a function of cost or as a result of unclear requirements at the start of development. If the development is done externally, this document can be considered a legal document so that if there are ever disputes, any ambiguity of what was promised to the client can be clarified.

Implementation is the part of the process where software engineers actually program the code for the project.

Software testing is an integral and important phase of the software development process. This part of the process ensures that defects are recognized as soon as possible.

Documenting the internal design of software for the purpose of future maintenance and enhancement is done throughout development. This may also include the writing of an API, be it external or internal. The software engineering process chosen by the developing team will determine how much internal documentation (if any) is necessary. Plan-driven models (e.g., Waterfall) generally produce more documentation than Agile models.

Deployment starts after the code is appropriately tested, is approved for release and sold or otherwise distributed into a production environment.

Software Training and Support is important and a lot of developers fail to realize that. It would not matter how much time and planning a development team puts into creating software if nobody in an organization ends up using it. People are often resistant to change and avoid venturing into an unfamiliar area, so as a part of the deployment phase, it is very important to have training classes for new clients of your software.

Maintaining and enhancing software to cope with newly discovered problems or new requirements can take far more time than the initial development of the software. It may be necessary to add code that does not fit the original design to correct an unforeseen problem or it may be that a customer is requesting more functionality and code can be added to accommodate their requests. If the labor cost of the maintenance phase exceeds 25% of the prior-phases' labor cost, then it is likely that the overall quality of at least one prior phase is poor.[citation needed] In that case, management should consider the option of rebuilding the system (or portions) before maintenance cost is out of control.

Several models exist to streamline the development process. Each one has its pros and cons, and it's up to the development team to adopt the most appropriate one for the project. Sometimes a combination of the models may be more suitable.

The waterfall model shows a process, where developers are to follow these phases in order:

In a strict Waterfall model, after each phase is finished, it proceeds to the next one. Reviews may occur before moving to the next phase which allows for the possibility of changes (which may involve a formal change control process). Reviews may also be employed to ensure that the phase is indeed complete; the phase completion criteria are often referred to as a "gate" that the project must pass through to move to the next phase. Waterfall discourages revisiting and revising any prior phase once it's complete. This "inflexibility" in a pure Waterfall model has been a source of criticism by supporters of other more "flexible" models.

The key characteristic of a Spiral model is risk management at regular stages in the development cycle. In 1988, Barry Boehm published a formal software system development "spiral model," which combines some key aspect of the waterfall model and rapid prototyping methodologies, but provided emphasis in a key area many felt had been neglected by other methodologies: deliberate iterative risk analysis, particularly suited to large-scale complex systems.

The Spiral is visualized as a process passing through some number of iterations, with the four quadrant diagram representative of the following activities:

Risk-driven spiral model, emphasizing the conditions of options and constraints in order to support software reuse, software quality can help as a special goal of integration into the product development. However, the spiral model has some restrictive conditions, as follows:

The first stage is to formulate a plan to achieve the objectives with these constraints, and then strive to find and remove all potential risks through careful analysis and, if necessary, by constructing a prototype. If some risks can not be ruled out, the customer has to decide whether to terminate the project or to ignore the risks and continue anyway. Finally, the results are evaluated and the design of the next phase begins.

Iterative development[1] prescribes the construction of initially small but ever-larger portions of a software project to help all those involved to uncover important issues early before problems or faulty assumptions can lead to disaster.

Agile software development uses iterative development as a basis but advocates a lighter and more people-centric viewpoint than traditional approaches. Agile processes use feedback, rather than planning, as their primary control mechanism. The feedback is driven by regular tests and releases of the evolving software.

There are many variations of agile processes:

"Code and fix" development is not so much a deliberate strategy as an artifact of naiveté and schedule pressure on software developers.[2] Without much of a design in the way, programmers immediately begin producing code. At some point, testing begins (often late in the development cycle), and the inevitable bugs must then be fixed before the product can be shipped. See also: Continuous integration

ISO 9000
ISO 9000 describes standards for a formally organized process to manufacture a product and the methods of managing and monitoring progress. Although the standard was originally created for the manufacturing sector, ISO 9000 standards have been applied to software development as well. Like CMMI, certification with ISO 9000 does not guarantee the quality of the end result, only that formalized business processes have been followed.

ISO/IEC 15504
ISO/IEC 15504 Information technology — Process assessment also known as Software Process Improvement Capability Determination (SPICE), is a "framework for the assessment of software processes". This standard is aimed at setting out a clear model for process comparison. SPICE is used much like CMMI. It models processes to manage, control, guide and monitor software development. This model is then used to measure what a development organization or project team actually does during software development. This information is analyzed to identify weaknesses and drive improvement. It also identifies strengths that can be continued or integrated into common practice for that organization or team.

Formal methods are mathematical approaches to solving software (and hardware) problems at the requirements, specification and design levels. Examples of formal methods include the B-Method, Petri nets, Automated theorem proving, RAISE and VDM. Various formal specification notations are available, such as the Z notation. More generally, automata theory can be used to build up and validate application behavior by designing a system of finite state machines.

Formal methods are most likely to be applied in avionics software, particularly where the software is safety critical. Software safety assurance standards, such as DO178B demand formal methods at the highest level of categorization (Level A).

Formalization of software development is creeping in, in other places, with the application of Object Constraint Language (and specializations such as Java Modeling Language) and especially with Model-driven architecture allowing execution of designs, if not specifications.

Another emerging trend in software development is to write a specification in some form of logic (usually a variation of FOL), and then to directly execute the logic as though it were a program. The OWL language, based on Description Logic, is an example. There is also work on mapping some version of English (or another natural language) automatically to and from logic, and executing the logic directly. Examples are Attempto Controlled English, and Internet Business Logic, which does not seek to control the vocabulary or syntax. A feature of systems that support bidirectional English-logic mapping and direct execution of the logic is that they can be made to explain their results, in English, at the business or scientific level.

The Government Accountability Office, in a 2003 report on one of the Federal Aviation Administration’s air traffic control modernization programs,[3] recommends following the agency’s guidance for managing major acquisition systems by