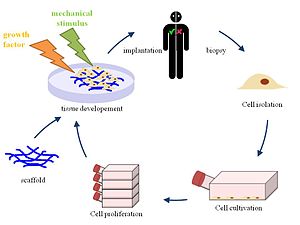 Tissue engineering was once categorized as a sub-field of bio materials, but having grown in scope and importance it can be considered as a field in its own right. It is the use of a combination of cells, engineering and materials methods, and suitable biochemical and physio-chemical factors to improve or replace biological functions. While most definitions of tissue engineering cover a broad range of applications, in practice the term is closely associated with applications that repair or replace portions of or whole tissues (i.e., bone, cartilage, blood vessels, bladder, skin etc.). Often, the tissues involved require certain mechanical and structural properties for proper functioning. The term has also been applied to efforts to perform specific biochemical functions using cells within an artificially-created support system (e.g. an artificial pancreas, or a bio artificial liver). The term regenerative medicine is often used synonymously with tissue engineering, although those involved in regenerative medicine place more emphasis on the use of stem cells to produce tissues. 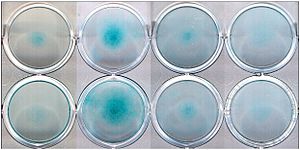 A commonly applied definition of tissue engineering, as stated by Langer[1] and Vacanti,[2] is "an interdisciplinary field that applies the principles of engineering and life sciences toward the development of biological substitutes that restore, maintain, or improve tissue function or a whole organ".[3] Tissue engineering has also been defined as "understanding the principles of tissue growth, and applying this to produce functional replacement tissue for clinical use."[4] A further description goes on to say that an "underlying supposition of tissue engineering is that the employment of natural biology of the system will allow for greater success in developing therapeutic strategies aimed at the replacement, repair, maintenance, and/or enhancement of tissue function."[4]

Powerful developments in the multidisciplinary field of tissue engineering have yielded a novel set of tissue replacement parts and implementation strategies. Scientific advances in biomaterials, stem cells, growth and differentiation factors, and biomimetic environments have created unique opportunities to fabricate tissues in the laboratory from combinations of engineered extracellular matrices ("scaffolds"), cells, and biologically active molecules. Among the major challenges now facing tissue engineering is the need for more complex functionality, as well as both functional and biomechanical stability in laboratory-grown tissues destined for transplantation. The continued success of tissue engineering, and the eventual development of true human replacement parts, will grow from the convergence of engineering and basic research advances in tissue, matrix, growth factor, stem cell, and developmental biology, as well as materials science and bio informatics.

In 2003, the NSF published a report entitled "The Emergence of Tissue Engineering as a Research Field" [1], which gives a thorough description of the history of this field.

Tissue engineering utilizes living cells as engineering materials. Examples include using living fibroblasts in skin replacement or repair, cartilage repaired with living chondrocytes, or other types of cells used in other ways.

Cells became available as engineering materials when scientists at Geron Corp. discovered how to extend telomeres in 1998, producing immortalized cell lines.[citation needed] Before this, laboratory cultures of healthy, noncancerous mammalian cells would only divide a fixed number of times, up to the Hayflick limit.

From fluid tissues such as blood, cells are extracted by bulk methods, usually centrifugation or apheresis. From solid tissues, extraction is more difficult. Usually the tissue is minced, and then digested with the enzymes trypsin or collagenase to remove the extracellular matrix that holds the cells. After that, the cells are free floating, and extracted using centrifugation or apheresis.
Digestion with trypsin is very dependent on temperature. Higher temperatures digest the matrix faster, but create more damage. Collagenase is less temperature dependent, and damages fewer cells, but takes longer and is a more expensive reagent.

Cells are often categorized by their source: 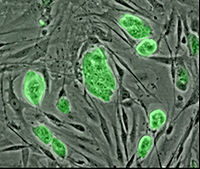 Cells are often implanted or 'seeded' into an artificial structure capable of supporting three-dimensional tissue formation. These structures, typically called scaffolds, are often critical, both ex vivo as well as in vivo, to recapitulating the in vivo milieu and allowing cells to influence their own microenvironments. Scaffolds usually serve at least one of the following purposes:

This animation of a rotating Carbon nanotube shows its 3D structure. Carbon nanotubes are among the numerous candidates for tissue engineering scaffolds since they are biocompatible, resistant to biodegradation and can be functionalized with biomolecules. However, the possibility of toxicity with non-biodegradable nano-materials is not fully understood.

To achieve the goal of tissue reconstruction, scaffolds must meet some specific requirements. A high porosity and an adequate pore size are necessary to facilitate cell seeding and diffusion throughout the whole structure of both cells and nutrients. Biodegradability is often an essential factor since scaffolds should preferably be absorbed by the surrounding tissues without the necessity of a surgical removal. The rate at which degradation occurs has to coincide as much as possible with the rate of tissue formation: this means that while cells are fabricating their own natural matrix structure around themselves, the scaffold is able to provide structural integrity within the body and eventually it will break down leaving the neotissue, newly formed tissue which will take over the mechanical load. Injectability is also important for clinical uses. Recent research on organ printing is showing how crucial a good control of the 3D environment is to insure reproducibility of experiments and offer better results.[11]

Many different materials (natural and synthetic, biodegradable and permanent) have been investigated. Most of these materials have been known in the medical field before the advent of tissue engineering as a research topic, being already employed as bioresorbable sutures. Examples of these materials are collagen and some polyesters.

New biomaterials have been engineered to have ideal properties and functional customization: injectability, synthetic manufacture, biocompatibility, non-immunogenicity, transparency, nano-scale fibers, low concentration, resorption rates, etc. PuraMatrix, originating from the MIT labs of Zhang, Rich, Grodzinsky and Langer is one of these new biomimetic scaffold families which has now been commercialized and is impacting clinical tissue engineering.

A commonly used synthetic material is PLA - polylactic acid. This is a polyester which degrades within the human body to form lactic acid, a naturally occurring chemical which is easily removed from the body. Similar materials are polyglycolic acid (PGA) and polycaprolactone (PCL): their degradation mechanism is similar to that of PLA, but they exhibit respectively a faster and a slower rate of degradation compared to PLA.

Scaffolds may also be constructed from natural materials: in particular different derivatives of the extracellular matrix have been studied to evaluate their ability to support cell growth. Proteic materials, such as collagen or fibrin, and polysaccharidic materials, like chitosan or glycosaminoglycans (GAGs), have all proved suitable in terms of cell compatibility, but some issues with potential immunogenicity still remains. Among GAGs hyaluronic acid, possibly in combination with cross linking agents (e.g. glutaraldehyde, water soluble carbodiimide, etc...), is one of the possible choices as scaffold material. Functionalized groups of scaffolds may be useful in the delivery of small molecules (drugs) to specific tissues. Another form of scaffold under investigation is decellularised tissue extracts whereby the remaining cellular remnants/extracellular matrices act as the scaffold. 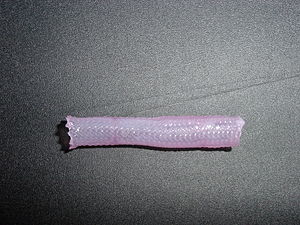 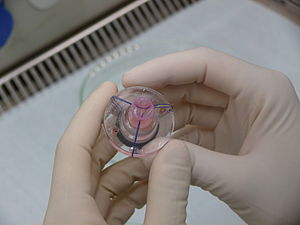 A number of different methods have been described in literature for preparing porous structures to be employed as tissue engineering scaffolds. Each of these techniques presents its own advantages, but none are free of drawbacks.

One of the continuing, persistent problems with tissue engineering is mass transport limitations. Engineered tissues generally lack an initial blood supply, thus making it difficult for any implanted cells to obtain sufficient oxygen and nutrients to survive, and/or function properly.

Self-assembly may play an important role here, both from the perspective of encapsulating cells and proteins, as well as creating scaffolds on the right physical scale for engineered tissue constructs and cellular ingrowth.

It might be possible to print organs, or possibly entire organisms. A recent innovative method of construction uses an ink-jet mechanism to print precise layers of cells in a matrix of thermoreversable gel. Endothelial cells, the cells that line blood vessels, have been printed in a set of stacked rings. When incubated, these fused into a tube.[13] [14]

In many cases, creation of functional tissues and biological structures in vitro requires extensive culturing to promote survival, growth and inducement of functionality. In general, the basic requirements of cells must be maintained in culture, which include oxygen, pH, humidity, temperature, nutrients and osmotic pressure maintenance.

Tissue engineered cultures also present additional problems in maintaining culture conditions. In standard cell culture, diffusion is often the sole means of nutrient and metabolite transport. However, as a culture becomes larger and more complex, such as the case with engineered organs and whole tissues, other mechanisms must be employed to maintain the culture, such as the creation of capillary networks within the tissue. 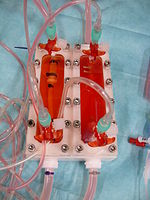 bioreactor for cultivation of vascular grafts

Another issue with tissue culture is introducing the proper factors or stimuli required to induce functionality. In many cases, simple maintenance culture is not sufficient. Growth factors, hormones, specific metabolites or nutrients, chemical and physical stimuli are sometimes required. For example, certain cells respond to changes in oxygen tension as part of their normal development, such as chondrocytes, which must adapt to low oxygen conditions or hypoxia during skeletal development. Others, such as endothelial cells, respond to shear stress from fluid flow, which is encountered in blood vessels. Mechanical stimuli, such as pressure pulses seem to be beneficial to all kind of cardiovascular tissue such as heart valves, blood vessels or pericardium.

A bioreactor in tissue engineering, as opposed to industrial bioreactors, is a device that attempts to simulate a physiological environment in order to promote cell or tissue growth in vivo. A physiological environment can consist of many different parameters such as temperature and oxygen or carbon dioxide concentration, but can extend to all kinds of biological, chemical or mechanical stimuli. Therefore, there are systems that may include the application of forces or stresses to the tissue or even of electrical current in two- or three-dimensional setups.

In academic and industry research facilities, it is typical for bioreactors to be developed to replicate the specific physiological environment of the tissue being grown (e.g., flex and fluid shearing for heart valve growth). Several general-use and application-specific bioreactors are also commercially available, and may provide static chemical stimulation or combination of chemical and mechanical stimulation.