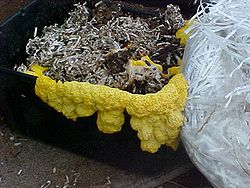 Yellow slime mold growing on a bin of wet paper

Biodegradation or biotic degradation or biotic decomposition is the chemical dissolution of materials by bacteria or other biological means. The term is often used in relation to ecology, waste management, biomedicine, and the natural environment (bioremediation) and is now commonly associated with environmentally friendly products that are capable of decomposing back into natural elements. Organic material can be degraded aerobically with oxygen, or anaerobically, without oxygen. A term related to biodegradation is biomineralisation, in which organic matter is converted into minerals. Biosurfactant, an extracellular surfactant secreted by microorganisms, enhances the biodegradation process.

Biodegradable matter is generally organic material such as plant and animal matter and other substances originating from living organisms, or artificial materials that are similar enough to plant and animal matter to be put to use by microorganisms. Some microorganisms have a naturally occurring, microbial catabolic diversity to degrade, transform or accumulate a huge range of compounds including hydrocarbons (e.g. oil), polychlorinated biphenyls (PCBs), polyaromatic hydrocarbons (PAHs), pharmaceutical substances, radionuclides and metals. Major methodological breakthroughs in microbial biodegradation have enabled detailed genomic, metagenomic, proteomic, bioinformatic and other high-throughput analyses of environmentally relevant microorganisms providing unprecedented insights into key biodegradative pathways and the ability of microorganisms to adapt to changing environmental conditions.[1] Products that contain biodegradable matter and non-biodegradable matter are often marketed as biodegradable.

In nature, different materials biodegrade at different rates. To be able to work effectively, most microorganisms that assist the biodegradation need light, water and oxygen. Temperature is also an important factor in determining the rate of biodegradation. This is because microorganisms tend to reproduce faster in warmer conditions. Biodegradation can be measured in a number of ways. Scientists often use respirometry tests for aerobic microbes. First one places a solid waste sample in a container with microorganisms and soil, and then aerate the mixture. Over the course of several days, microorganisms digest the sample bit by bit and produce carbon dioxide – the resulting amount of CO2 serves as an indicator of degradation. Biodegradation can also be measured by anaerobic microbes and the amount of methane or alloy that they are able to produce. In formal scientific literature, the process is termed bio-remediation. [2]

Approximated time for compounds to biodegrade

OBPs are made by adding a small proportion of compounds of specific transition metals (iron, manganese, cobalt and nickel are commonly used) into the normal production of polyolefins such as polyethylene (PE), polypropylene (PP) and polystyrene (PS). The additives act as catalysts to speed up the normal oxidative degradation, increasing the overall process by up to several orders of magnitude (factors of 10).

The products of the catalyzed oxidative degradation of the polyolefins are precisely the same as for conventional polyolefins because, other than a small amount of additive present, the plastics are conventional polyolefins. Many commercially useful hydrocarbons (e.g., cooking oils, polyolefins, many other plastics) contain small amounts of additives called antioxidants that prevent oxidative degradation during storage and use. Antioxidants function by ‘deactivating’ the free radicals that cause degradation. Lifetime (shelf life + use life) is controlled by antioxidant level and the rate of degradation after disposal is controlled by the amount and nature of the catalyst.

Since there are no existing corresponding standards that can be used directly in reference to plastics that enter the environment in other ways other than compost - i.e. as terrestrial or marine litter or in landfills, OBP technology is often attacked by the HBP industry as unable to live up to the standards (which are actually the standards for composting). It has to be understood that composting and biodegradation are not identical. OBP can however be tested according to ASTM D6954, and (as from 1.1.2010) UAE 5009:2009.

HBPs tend to degrade and biodegrade somewhat more quickly than OBP, but they have to be collected and put into an industrial composting unit. The end result is the same - both are converted to carbon dioxide (CO2), water (H2O) and biomass. OBP are generally less expensive, possess better physical properties and can be made with current plastics processing equipment. However, HBP emits methane in anaerobic conditions, but OBP does not.

Polyesters play a predominant role in hydro-biodegradable plastics due to their potentially hydrolysable ester bonds. HBP can be made from agricultural resources such as corn, wheat, sugar cane, or fossil (petroleum-based)resources, or blend of the two. Some of the commonly-used polymers include PHA (polyhydroxyalkanoates), PHBV (polyhydroxybutyrate-valerate), PLA (polylactic acid), PCL (polycaprolactone), PVA (polyvinyl alcohol), PET (polyethylene terephthalate), etc. It would be misleading to call these "renewable" because the agricultural production process burns significant amounts of hydrocarbons and emits significant amounts of CO2. OBPs (like normal plastics)are made from a by-product of oil or natural gas, which would be produced whether or not the by-product were used to make plastic.

HBP technology claims to be biodegradable by meeting the ASTM D6400-04 and EN 13432 Standards. However, these two commonly quoted standards are related to the performance of plastics in a commercially managed compost environment. They are not biodegradation standards. Both were developed for hydro-biodegradable polymers where the mechanism including biodegradation is based on reaction with water and state that in order for a production to be compostable, the following criteria need to be met:

In 1973 it was proved for first time that polyester degrades when disposed in bioactive material such as soil. As a result, polyesters are water resistant and can be melted and shaped into sheets, bottles, and other products, making certain plastics now available as a biodegradable product. Following, Polyhydroxylalkanoates (PHAs) were produced directly from renewable resources by microbes. They are approximately 95% cellular bacteria and can be manipulated by genetic strategies. The composition and biodegradability of PHAs can be regulated by blending it with other natural polymers. In the 1980s the company ICI Zenecca commercialized PHAs under the name Biopol. It was used for the production of shampoo bottles and other cosmetic products. Consumer response was unusual. Consumers were willing to pay more for this product because it was natural and biodegradable, which had not occurred before.[3]

Now biodegradable technology is a highly developed market with applications in product packaging, production and medicine. Biodegradable technology is concerned with the manufacturing science of biodegradable materials. It imposes science based mechanisms of plant genetics into the processes of today. Scientists and manufacturing corporations can help impact climate change by developing a use of plant genetics that would mimic some present technologies. By looking to plants, such as biodegradable material harvested through photosynthesis, waste and toxins can be minimized.[4]

Biodegradable technology is especially utilized by the bio-medical community. Biodegradable polymers are classified into three groups: medical, ecological, and dual application, while in terms of origin they are divided into two groups: natural and synthetic.[6] The Clean Technology Group is exploiting the use of supercritical carbon dioxide, which under high pressure at room temperature is a solvent that can use biodegradable plastics to make polymer drug coatings. The polymer (meaning a material composed of molecules with repeating structural units that form a long chain) is used to encapsulate a drug prior to injection in the body and is based on lactic acid, a compound normally produced in the body, and is thus able to be excreted naturally. The coating is designed for controlled release over a period of time, reducing the number of injections required and maximizing the therapeutic benefit. Professor Steve Howdle states that biodegradable polymers are particularly attractive for use in drug delivery, as once introduced into the body they require no retrieval or further manipulation and are degraded into soluble, non-toxic by-products. Different polymers degrade at different rates within the body and therefore polymer selection can be tailored to achieve desired release rates.[7]

Other biomedical applications include the use of biodegradable, elastic shape-memory polymers. Biodegradable implant materials can now be used for minimally invasive surgical procedures through degradable thermoplastic polymers. These polymers are now able to change their shape with increase of temperature, causing shape memory capabilities as well as easily degradable sutures. As a result, implants can now fit through small incisions, doctors can easily perform complex deformations, and sutures and other material aides can naturally biodegrade after a completed surgery.[8]

History of the term biodegradable

The first known use of the word in biological text was in 1961 when employed to describe the breakdown of material into the base components of carbon, hydrogen, and oxygen by microorganisms. Now biodegradable is commonly associated with environmentally friendly products that are part of the earth’s innate cycle and capable of decomposing back into natural elements.[9]