Technology and society or technology and culture refers to cyclical co-dependence, co-influence, co-production of technology and society upon the other (technology upon culture, and vice-versa). This synergistic relationship occurred from the dawn of humankind, with the invention of simple tools and continues into modern technologies such as the printing press and computers. The academic discipline studying the impacts of science, technology, and society and vice versa is called (and can be found at) Science and technology studies.

The importance of stone tools, circa 2.5 million years ago, is considered fundamental in human development in the hunting hypothesis.

It has been suggested, in Catching Fire: How Cooking Made Us Human, that the control of fire by early humans and the associated development of cooking was the spark that radically changed human evolution.

All these little changes in mobile phones, like Internet access, are further examples of the cycle of co-production. Society's need for being able to call on people and be available everywhere resulted in the research and development of mobile phones. They in turn influenced the way we live our lives. As the populace relies more and more on mobile phones, additional features were requested. This is also true with today's modern media player. 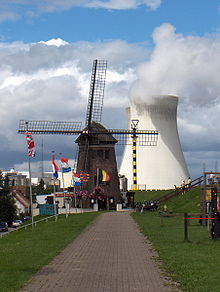 In ancient history, economics began when occasional, spontaneous exchange of goods and services was replaced over time by deliberate trade structures. Makers of arrowheads, for example, might have realized they could do better by concentrating on making arrowheads and barter for other needs. Clearly, regardless of goods and services bartered, some amount of technology was involved—if no more than in the making of shell and bead jewelry. Even the shaman's potions and sacred objects can be said to have involved some technology. So, from the very beginnings, technology can be said to have spurred the development of more elaborate economies.[1]

In the modern world, superior technologies, resources, geography, and history give rise to robust economies; and in a well-functioning, robust economy, economic excess naturally flows into greater use of technology. Moreover, because technology is such an inseparable part of human society, especially in its economic aspects, funding sources for (new) technological endeavors are virtually illimitable. However, while in the beginning, technological investment involved little more than the time, efforts, and skills of one or a few men, today, such investment may involve the collective labor and skills of many millions.

Consequently, the sources of funding for large technological efforts have dramatically narrowed, since few have ready access to the collective labor of a whole society, or even a large part. It is conventional to divide up funding sources into governmental (involving whole, or nearly whole, social enterprises) and private (involving more limited, but generally more sharply focused) business or individual enterprises.

The government is a major contributor to the development of new technology in many ways. In the United States alone, many government agencies specifically invest billions of dollars in new technology.

[In 1980, the UK government invested just over 6-million pounds in a four-year program, later extended to six years, called the Microelectronics Education Programme (MEP), which was intended to give every school in Britain at least one computer, software, training materials, and extensive teacher training. Similar programs have been instituted by governments around the world.]

Technology has frequently been driven by the military, with many modern applications developed for the military before they were adapted for civilian use. However, this has always been a two-way flow, with industry often developing and adopting a technology only later adopted by the military.

Research and development is one of the smallest areas of investments made by corporations toward new and innovative technology.

Many foundations and other nonprofit organizations contribute to the development of technology. In the OECD, about two-thirds of research and development in scientific and technical fields is carried out by industry, and 98 percent and 10 percent respectively by universities and government. But in poorer countries such as Portugal and Mexico the industry contribution is significantly less. The U.S. government spends more than other countries on military research and development, although the proportion has fallen from about 30 percent in the 1980s to less than 10 percent.[2]

Technology and Economics in the Future

Some analysts such as Martin Ford, author of The Lights in the Tunnel: Automation, Accelerating Technology and the Economy of the Future,[3] argue that as information technology advances, robots and other forms of automation will ultimately result in significant unemployment as machines and software begin to match and exceed the capability of workers to perform most routine jobs.

As robotics and artificial intelligence develop further, even many skilled jobs may be threatened. Technologies such as machine learning[4] may ultimately allow computers to do many knowledge-based jobs that require significant education. This may result in substantial unemployment at all skill levels, stagnant or falling wages for most workers, and increased concentration of income and wealth as the owners of capital capture an ever larger fraction of the economy. This in turn could lead to depressed consumer spending and economic growth as the bulk of the population lacks sufficient discretionary income to purchase the products and services produced by the economy.[5]

Technology often enables organizational and bureaucratic group structures that otherwise and heretofore were simply not possible. Examples of this might include:

Technology enables greater knowledge of international issues, values, and cultures. Due mostly to mass transportation and mass media, the world seems to be a much smaller place, due to the following, among others:

Technology provides an understanding, and an appreciation for the world around us.

Most modern technological processes produce unwanted byproducts in addition to the desired products, which is known as industrial waste and pollution. While most material waste is re-used in the industrial process, many forms are released into the environment, with negative environmental side effects, such as pollution and lack of sustainability. Different social and political systems establish different balances between the value they place on additional goods versus the disvalues of waste products and pollution. Some technologies are designed specifically with the environment in mind, but most are designed first for economic or ergonomic effects. Historically, the value of a clean environment and more efficient productive processes has been the result of an increase in the wealth of society, because once people are able to provide for their basic needs, they are able to focus on less-tangible goods such as clean air and water.

The effects of technology on the environment are both obvious and subtle. The more obvious effects include the depletion of nonrenewable natural resources (such as petroleum, coal, ores), and the added pollution of air, water, and land. The more subtle effects include debates over long-term effects (e.g., global warming, deforestation, natural habitat destruction, coastal wetland loss.)

One of the main problems is the lack of an effective way to remove these pollutants on a large scale expediently. In nature, organisms "recycle" the wastes of other organisms, for example, plants produce oxygen as a by-product of photosynthesis, oxygen-breathing organisms use oxygen to metabolize food, producing carbon dioxide as a by-product, which plants use in a process to make sugar, with oxygen as a waste in the first place. No such mechanism exists for the removal of technological wastes.

Humanity at the moment may be compared to a colony of bacteria in a Petri dish with a constant food supply: with no way to remove the wastes of their metabolism, the bacteria eventually poison themselves.

Society also controls technology through the choices it makes. These choices not only include consumer demands; they also include:

According to Williams and Edge,[7] the construction and shaping of technology includes the concept of choice (and not necessarily conscious choice). Choice is inherent in both the design of individual artifacts and systems, and in the making of those artifacts and systems.

The idea here is that a single technology may not emerge from the unfolding of a predetermined logic or a single determinant, technology could be a garden of forking paths, with different paths potentially leading to different technological outcomes. This is a position that has been developed in detail by Judy Wajcman Therefore, choices could have differing implications for society and for particular social groups.hh

In one line of thought, technology develops autonomously, in other words, technology seems to feed on itself, moving forward with a force irresistible by humans. To these individuals, technology is "inherently dynamic and self-augmenting."[8]

Jacques Ellul is one proponent of the irresistibleness of technology to humans. He espouses the idea that humanity cannot resist the temptation of expanding our knowledge and our technological abilities. However, he does not believe that this seeming autonomy of technology is inherent. But the perceived autonomy is because humans do not adequately consider the responsibility that is inherent in technological processes.

Another proponent of these ideas is Langdon Winner who believes that technological evolution is essentially beyond the control of individuals or society.

Individuals rely on governmental assistance to control the side effects and negative consequences of technology.