Brain implants, often referred to as neural implants, are technological devices that connect directly to a biological subject's brain - usually placed on the surface of the brain, or attached to the brain's cortex. A common purpose of modern brain implants and the focus of much current research is establishing a biomedical prosthesis circumventing areas in the brain that have become dysfunctional after a stroke or other head injuries. This includes sensory substitution, e.g. in vision. Other brain implants are used in animal experiments simply to record brain activity for scientific reasons. Some brain implants involve creating interfaces between neural systems and computer chips. This work is part of a wider research field called brain-computer interfaces. (Brain-computer interface research also includes technology such as EEG arrays that allow interface between mind and machine but do not require direct implantation of a device.)

Neural-implants such as deep brain stimulation and Vagus nerve stimulation are increasingly becoming routine for patients with Parkinson's disease and clinical depression respectively, proving themselves as a boon for people with diseases which were previously regarded as incurable.

Brain implants electrically stimulate, block[1] or record (or both record and stimulate simultaneously[2]) signals from single neurons or groups of neurons (biological neural networks) in the brain. The blocking technique is called intra-abdominal vagal blocking.[1] This can only be done where the functional associations of these neurons are approximately known. Because of the complexity of neural processing and the lack of access to action potential related signals using neuroimaging techniques, the application of brain implants has been seriously limited until recent advances in neurophysiology and computer processing power.

Research in sensory substitution has made slow progress in recent years. Especially in vision, due to the knowledge of the working of the visual system, eye implants (often involving some brain implants or monitoring) have been applied with demonstrated success. For hearing, cochlear implants are used to stimulate the auditory nerve directly. The vestibulocochlear nerve is part of the peripheral nervous system, but the interface is similar to that of true brain implants.

Multiple projects have demonstrated success at recording from the brains of animals for long periods of time. As early as 1976, researchers at the NIH led by Edward Schmidt made action potential recordings of signals from Rhesus monkey motor cortexes using immovable "hatpin" electrodes,[3] including recording from single neurons for over 30 days, and consistent recordings for greater than three years from the best electrodes.

The "hatpin" electrodes were made of pure iridium and insulated with Parylene-c, materials that are currently used in the Cyberkinetics implementation of the Utah array.[4] These same electrodes, or derivations thereof using the same biocompatible electrode materials, are currently used in visual prosthetics laboratories,[5] laboratories studying the neural basis of learning,[6] and motor prosthetics approaches other than the Cyberkinetics probes.[7] 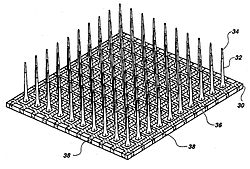 Schematic of the "Utah" Electrode Array

A competing series of electrodes and projects is sold by Plexon including Plextrode Series of Electrodes. These are variously the "Michigan Probes",[8] the microwire arrays first used at MIT,[9] and the FMAs from MicroProbe that emerged from the visual prosthetic project collaboration between Phil Troyk, David Bradley, and Martin Bak.[10]

Other laboratory groups produce their own implants to provide unique capabilities not available from the commercial products.[11][12][13][14]

Breakthroughs include studies of the process of functional brain re-wiring throughout the learning of a sensory discrimination,[15] control of physical devices by rat brains,[16] monkeys over robotic arms,[17] remote control of mechanical devices by monkeys and humans,[18] remote control over the movements of roaches,[19] electronic-based neuron transistors for leeches,[20] the first reported use of the Utah Array in a human for bidirectional signalling.[21] Currently a number of groups are conducting preliminary motor prosthetic implants in humans. These studies are presently limited to several months by the longevity of the implants.

Brain pacemakers have been in use since 1997 to ease the symptoms of such diseases as epilepsy, Parkinson's Disease, dystonia and recently depression.

In 1870, Eduard Hitzig and Gustav Fritsch demonstrated that electrical stimulation of the brains of dogs could produce movements. Robert Bartholow showed the same to be true for humans in 1874. By the start of the 20th century Fedor Krause began to systematically map human brain areas, using patients that had undergone brain surgery.

Yale University physiologist Jose Delgado demonstrated limited control of animal and human subjects' behaviours using electronic stimulation. He invented the stimoceiver or transdermal stimulator a device implanted in the brain to transmit electrical impulses that modify basic behaviours such as aggression or sensations of pleasure.

Delgado was later to write a popular book on mind control, called "Physical Control of the Mind", where he stated: "the feasibility of remote control of activities in several species of animals has been demonstrated [...] The ultimate objective of this research is to provide an understanding of the mechanisms involved in the directional control of animals and to provide practical systems suitable for human application."

In the 1950s, the CIA also funded research into mind control techniques, through programs such as MKULTRA. Perhaps because he received funding for some research through the US Office of Naval Research, it has been suggested (but not proven) that Delgado also received backing through the CIA. He denied this claim in a 2005 article in Scientific American describing it only as a speculation by conspiracy-theorists. He stated that his research was only progressively scientifically-motivated to understand how the brain works.

Who are good candidates to receive neural implants? What are the good uses of neural implants, and what are the bad uses? Whilst deep brain stimulation is increasingly becoming routine for patients with Parkinson's disease, there may be some behavioural side effects. Reports in the literature describe the possibility of apathy, hallucinations, compulsive gambling, hypersexuality, cognitive dysfunction, and depression. However, these may be temporary and related to correct placement and calibration of the stimulator and so are potentially reversible.[22]

Some transhumanists, such as Raymond Kurzweil and Kevin Warwick, see brain implants as part of a next step for humans in progress and evolution, where as others, especially bioconservatives, view them as unnatural, with humankind losing essential human qualities. It raises controversy similar to other forms of human enhancement. For instance, it is argued that implants would technically change people into cybernetic organisms (cyborgs). Some people fear implants may be used for mind control, e.g. to change human perception of reality.

Brain implants in fiction and philosophy

Brain implants are now part of modern culture but there were early philosophical references of relevance as far back as René Descartes.

In his 1638 Discourse on the Method, a study on proving self existence, Descartes wrote that a person would not know if an evil demon had trapped his mind in a black box and was controlling all inputs and outputs. Philosopher Hilary Putnam provided a modern parallel of Descartes argument in his 1989 discussion of a brain in a vat, where he argues that brains which were directly fed with an input from a computer would not know the deception from reality.

Popular science fiction discussing brain implants and mind control became widespread in the 20th century, often with a dystopian outlook. Literature in the 1970s delved into the topic, including The Terminal Man by Michael Crichton, where a man suffering from brain damage receives an experimental surgical brain implant designed to prevent seizures, which he abuses by triggering for pleasure.

Fear that the technology will be misused by the government and military is an early theme. In the 1981 BBC serial The Nightmare Man the pilot of a high-tech mini submarine is linked to his craft via a brain implant but becomes a savage killer after ripping out the implant.

Perhaps the most influential novel exploring the world of brain implants was William Gibson's 1984 novel Neuromancer. This was the first novel in a genre that came to be known as "cyberpunk". It follows a computer hacker through a world where mercenaries are augmented with brain implants to enhance strength, vision, memory, etc. Gibson coins the term "matrix" and introduces the concept of "jacking in" with head electrodes or direct implants. He also explores possible entertainment applications of brain implants such as the "simstim" (simulated stimulation) which is a device used to record and playback experiences.

Gibson's work led to an explosion in popular culture references to brain implants. Its influences are felt, for example, in the 1989 roleplaying game Shadowrun, which borrowed his term "datajack" to describe a brain-computer interface. The implants in Gibson's novels and short stories formed the template for the 1995 film Johnny Mnemonic and later, The Matrix Trilogy.

The Gap Cycle (The Gap into): In Stephen R. Donaldson's series of novels, the use (and misuse) of "zone implant" technology is key to several plotlines.

Ghost in the Shell anime and manga franchise: Cyberbrain neural augmentation technology is the focus. Implants of powerful computers provide vastly increased memory capacity, total recall, as well as the ability to view his or her own memories on an external viewing device. Users can also initiate a telepathic conversation with other cyberbrain users, the downsides being cyberbrain hacking, malicious memory alteration, and the deliberate distortion of subjective reality and experience.

In the video games PlanetSide and Chrome, players can use implants to improve their aim, run faster, and see better, along with other enhancements.

Brainstorm (1983): The military tries to take control over a new technology that can record and transfer thoughts, feelings, and sensations.

The Manchurian Candidate (2004): For a means of mind control, the presidential hopeful Raymond Shaw unknowingly has a chip implanted in his head by Manchurian Global, a fictional geopolitical organization aimed at making parts of the government sleeper cells, or puppets for their monetary advancement.

South Park: Bigger, Longer & Uncut: The "V-chip" implant is a satirical implant for foul-mouthed children, and serves a related purpose to the true V-chip (it delivers an electric shock to the child whenever they swear).

The extreme box office success of the Matrix films, combined with earlier science fiction references, have made brain implants ubiquitous in popular literature.

Blake's 7: A character has a brain implant which is supposed to prevent future aggression after being convicted of killing an officer from the oppressive Federation.

Dark Angel: The notorious Red Series use neuro-implants pushed into their brain stem at the base of their skull to amp them up and hyper-adrenalize them and make them almost unstoppable. Unfortunately the effects of the implant burn out their system between six months to a year and kill them.

The X-Files (episode?): FBI Agent Dana Scully discovers an implant set under the skin at the back of her neck which can read her every thought and change memory through electrical signals that alter the brain chemistry.