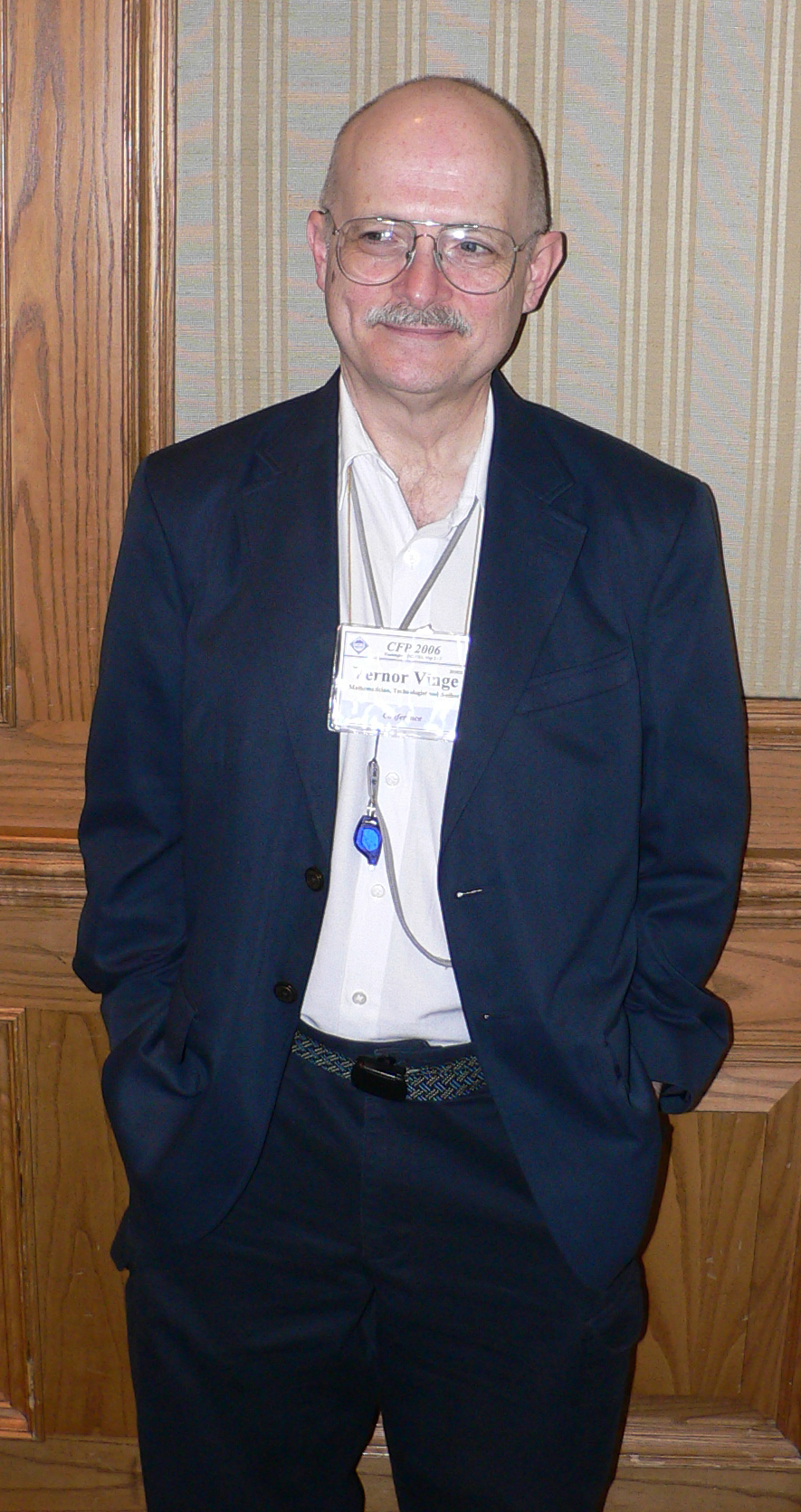 Vinge published his first short story, "", in the March 1966 issue of "", then edited by . The story explores the theme of artificially augmented intelligence by connecting the brain directly to computerised data sources. He became a moderately prolific contributor to SF magazines in the 1960s and early 1970s, adapting one of his stories into a short novel, "" (1969), and publishing a second novel, "" (1975).

Vinge came to prominence in 1981 with his novella "", which is one of the earliest stories to present a fully fleshed-out concept of , which would later be central to stories by , and others.

His next two novels, "" (1984) and "" (1986), explore the spread of a future libertarian society, and deal with the impact of a technology which can create impenetrable force fields called 'Bobbles'. These books built Vinge's reputation as an author who would explore ideas to their logical conclusions in particularly inventive ways. Both books were nominated for the , but lost to novels by and .

These two novels and "True Names" also emphasized Vinge's interest in the . "True Names" takes place in a world on the cusp of the singularity. "The Peace War" shows a world in which the singularity has been postponed by the Bobbles and a global plague, while "Marooned in Realtime" follows a small group of people who have managed to miss the singularity which otherwise encompassed Earth.

Vinge won the Hugo Award with his 1992 novel, "". In it, he envisions a galaxy that is divided up into 'zones of thought', in which the further one moves from the center of the galaxy, the higher the level of technology one can achieve. Nearest the center is 'The Unthinking Depths', where even human level intelligence is impossible. Earth is in 'The Slow Zone', in which (FTL) travel cannot be achieved. Most of the book, however, takes place in a zone called 'The Beyond', where the computations necessary for FTL travel are possible, but transcendence beyond the Singularity to superhuman intelligence is not. In the last zone, 'The Transcend', there are apparently no limitations at all. The Beyond, therefore, permits a classic , using technology that would push past the singularity. "Fire" includes a large number of additional ideas making for an unusually complex and rich universe and story.

"" (1999) was a to "Fire", following competing groups of humans in The Slow Zone as they struggle over who has the rights to exploit a technologically emerging alien culture. In addition, "Deepness" explores the themes of technological freedom vs. technology as a tool of enslavement and control. This novel transcends the polarities of a liberal vs. conservative-type struggle. "Deepness" also won a Hugo Award in 2000.

Vinge's 2006 novel, "" is set in a similar universe to "Fast Times at Fairmont High" and is a Hugo Award winner for Best Novel. He intends his next novel to be a sequel to "", set approximately 10 years after the events of that book.

Vinge retired in 2000 from teaching at , in order to write full-time. Most years, since its inception in 1999, Vinge has been on the 's selection committee for their . Vernor Vinge was Writer Guest of Honor at , the 60th in .

The concepts of and inform much of Vinge's writing, whether his stories embrace them ("Bookworm, Run!"; "True Names"; "Rainbows End") or construct worlds to specifically explain the non-existence of these phenomena ("A Fire Upon the Deep", "A Deepness in the Sky").

A pro-market/anarchocapitalist theme can be seen in other works, either explicitly ("The Ungoverned", "Marooned in Realtime") or more quietly (the confrontation between the Emergents and the Qeng Ho in "A Deepness in the Sky").

In Gene Wolfe's "" (published in 1972, before Vinge had written his best-known work), the narrator finds a collection of Vernor Vinge stories on a top shelf of a far-future library on a distant world, though the cover has been so worn down that he thinks a librarian must have mistaken the "V. Vinge" on the spine as "Winge".

In David Brin's "", there is a reference to the main character experiencing something like "Vingeian focus," a quick reference to "". Vinge's review of the book is featured on the back cover.

*
*
* [http://www.worldswithoutend.com/author.asp?ID=41 Vernor Vinge] , at Worlds Without End
* [http://www.spectrum.ieee.org/archive/1552 "Synthetic Serendipity"] , on IEEE Spectrum
* [http://www.nature.com/nature/journal/v440/n7083/full/440411a.html "2020 Computing: The creativity machine"] , from Nature magazine.
* [http://www-rohan.sdsu.edu/faculty/vinge/misc/singularity.html The Coming Technological Singularity: How to Survive in the Post-Human Era, 1993]
* [http://www.3pointd.com/20060908/vernor-vinge-paints-the-future-at-agc/ Vernor Vinge's keynote address at the 2006 Austin Games Conference.]
* " [http://smallworldpodcast.com/?p=409 Vernor Vinge/Rainbows End interview] " - [http://smallworldpodcast.com small WORLD Podcast] 2006
* [http://www.thefutureandyou.libsyn.com/?search_string=vinge&Submit=Search&search=1 All of Vernor Vinge's audio interviews on the podcast "The Future And You"] (in which he describes the singularity and his other expectations of the future)
* [http://reason.com/news/show/119237.html "Reason" Interview of Vernor Vinge]
* [http://instapundit.com/archives/029925.php A podcast interview with Vinge by Glenn Reynolds and Helen Smith.]
* [http://nielsenhayden.com/makinglight/archives/009335.html 2007 Hugo Award Winners]