Cell culture in a Petri dish

Cell culture is the complex process by which cells are grown under controlled conditions. In practice, the term "cell culture" has come to refer to the culturing of cells derived from singlecellular eukaryotes, especially animal cells. However, there are also cultures of plants, fungi and microbes, including viruses, bacteria and protists. The historical development and methods of cell culture are closely interrelated to those of tissue culture and organ culture.

Animal cell culture began when scientists removed a small amount of monkey kidney from a host organism and maintained it in a warm saline solution for several days, establishing the principle of tissue culture.[1]

Cells can be isolated from tissues for ex vivo culture in several ways. Cells can be easily purified from blood; however, only the white cells are capable of growth in culture. Mononuclear cells can be released from soft tissues by enzymatic digestion with enzymes such as collagenase, trypsin, or pronase, which break down the extracellular matrix. Alternatively, pieces of tissue can be placed in growth media, and the cells that grow out are available for culture. This method is known as explant culture.

Cells that are cultured directly from a subject are known as primary cells. With the exception of some derived from tumors, most primary cell cultures have limited lifespan. After a certain number of population doublings (called the Hayflick limit), cells undergo the process of senescence and stop dividing, while generally retaining viability.

An established or immortalized cell line has acquired the ability to proliferate indefinitely either through random mutation or deliberate modification, such as artificial expression of the telomerase gene. Numerous cell lines are well established as representative of particular cell types.

Cells are grown and maintained at an appropriate temperature and gas mixture (typically, 37°C, 5% CO2 for mammalian cells) in a cell incubator. Culture conditions vary widely for each cell type, and variation of conditions for a particular cell type can result in different phenotypes being expressed.

Aside from temperature and gas mixture, the most commonly varied factor in culture systems is the growth medium. Recipes for growth media can vary in pH, glucose concentration, growth factors, and the presence of other nutrients. The growth factors used to supplement media are often derived from animal blood, such as calf serum. One complication of these blood-derived ingredients is the potential for contamination of the culture with viruses or prions, particularly in medical biotechnology applications. Current practice is to minimize or eliminate the use of these ingredients wherever possible and use chemically defined media, but this cannot always be accomplished. Alternative strategies involve sourcing the animal blood from countries with minimum BSE/TSE risk, such as Australia and New Zealand, and using purified nutrient concentrates derived from serum in place of whole animal serum for cell culture.[2]

Cells can be grown either in suspension or adherent cultures. Some cells naturally live in suspension, without being attached to a surface, such as cells that exist in the bloodstream. There are also cell lines that have been modified to be able to survive in suspension cultures so they can be grown to a higher density than adherent conditions would allow. Adherent cells require a surface, such as tissue culture plastic or microcarrier, which may be coated with extracellular matrix components to increase adhesion properties and provide other signals needed for growth and differentiation. Most cells derived from solid tissues are adherent. Another type of adherent culture is organotypic culture, which involves growing cells in a three-dimensional (3-D) environment as opposed to two-dimensional culture dishes. This 3D culture system is biochemically and physiologically more similar to in vivo tissue, but is technically challenging to maintain because of many factors (e.g. diffusion).ball

Cell line cross-contamination can be a problem for scientists working with cultured cells. Studies suggest anywhere from 15–20% of the time, cells used in experiments have been misidentified or contaminated with another cell line.[4][5][6] Problems with cell line cross-contamination have even been detected in lines from the NCI-60 panel, which are used routinely for drug-screening studies.[7][8] Major cell line repositories, including the American Type Culture Collection (ATCC) and the German Collection of Microorganisms and Cell Cultures (DSMZ), have received cell line submissions from researchers that were misidentified by them.[7][9] Such contamination poses a problem for the quality of research produced using cell culture lines, and the major repositories are now authenticating all cell line submissions.[10] ATCC uses short tandem repeat (STR) DNA fingerprinting to authenticate its cell lines.[11]

To address this problem of cell line cross-contamination, researchers are encouraged to authenticate their cell lines at an early passage to establish the identity of the cell line. Authentication should be repeated before freezing cell line stocks, every two months during active culturing and before any publication of research data generated using the cell lines. Many methods are used to identify cell lines, including isoenzyme analysis, human lymphocyte antigen (HLA) typing, chromosomal analysis, karyotyping, morphology and STR analysis.[11]

As cells generally continue to divide in culture, they generally grow to fill the available area or volume. This can generate several issues:

Among the common manipulations carried out on culture cells are media changes, passaging cells, and transfecting cells. These are generally performed using tissue culture methods that rely on sterile technique. Sterile technique aims to avoid contamination with bacteria, yeast, or other cell lines. Manipulations are typically carried out in a biosafety hood or laminar flow cabinet to exclude contaminating micro-organisms. Antibiotics (e.g. penicillin and streptomycin) and antifungals (e.g.amphotericin B) can also be added to the growth media.

As cells undergo metabolic processes, acid is produced and the pH decreases. Often, a pH indicator is added to the medium to measure nutrient depletion.

In the case of adherent cultures, the media can be removed directly by aspiration, and then is replaced.

Passaging (also known as subculture or splitting cells) involves transferring a small number of cells into a new vessel. Cells can be cultured for a longer time if they are split regularly, as it avoids the senescence associated with prolonged high cell density. Suspension cultures are easily passaged with a small amount of culture containing a few cells diluted in a larger volume of fresh media. For adherent cultures, cells first need to be detached; this is commonly done with a mixture of trypsin-EDTA; however, other enzyme mixes are now available for this purpose. A small number of detached cells can then be used to seed a new culture.

Another common method for manipulating cells involves the introduction of foreign DNA by transfection. This is often performed to cause cells to express a protein of interest. More recently, the transfection of RNAi constructs have been realized as a convenient mechanism for suppressing the expression of a particular gene/protein. DNA can also be inserted into cells using viruses, in methods referred to as transduction, infection or transformation. Viruses, as parasitic agents, are well suited to introducing DNA into cells, as this is a part of their normal course of reproduction. 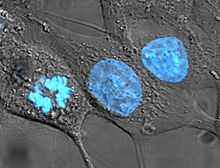 Cultured HeLa cells have been stained with Hoechst turning their nuclei blue, and are one of the earliest human cell lines descended from Henrietta Lacks, who died of cervical cancer from which these cells originated.

Cell lines that originate with humans have been somewhat controversial in bioethics, as they may outlive their parent organism and later be used in the discovery of lucrative medical treatments. In the pioneering decision in this area, the Supreme Court of California held in Moore v. Regents of the University of California that human patients have no property rights in cell lines derived from organs removed with their consent.[12]

For more details on this topic, see Hybridoma.

It is possible to fuse normal cells with an immortalised cell line. This method is used to produce monoclonal antibodies. In brief, lymphocytes isolated from the spleen (or possibly blood) of an immunised animal are combined with an immortal myeloma cell line (B cell lineage) to produce a hybridoma which has the antibody specificity of the primary lymphoctye and the immortality of the myeloma. Selective growth medium (HA or HAT) is used to select against unfused myeloma cells; primary lymphoctyes die quickly in culture and only the fused cells survive. These are screened for production of the required antibody, generally in pools to start with and then after single cloning.

Biological products produced by recombinant DNA (rDNA) technology in animal cell cultures include enzymes, synthetic hormones, immunobiologicals (monoclonal antibodies, interleukins, lymphokines), and anticancer agents. Although many simpler proteins can be produced using rDNA in bacterial cultures, more complex proteins that are glycosylated (carbohydrate-modified) currently must be made in animal cells. An important example of such a complex protein is the hormone erythropoietin. The cost of growing mammalian cell cultures is high, so research is underway to produce such complex proteins in insect cells or in higher plants, use of single embryonic cell and somatic embryos as a source for direct gene transfer via particle bombardment, transit gene expression and confocal microscopy observation is one of its applications. It also offers to confirm single cell origin of somatic embryos and the asymmetry of the first cell division, which starts the process.

Research in tissue engineering, stem cells and molecular biology primarily involves cultures of cells on flat plastic dishes. This technique is known as two-dimensional (2D) cell culture, and was first developed by Wilhelm Roux who, in 1885, removed a portion of the medullary plate of an embryonic chicken and maintained it in warm saline for several days on a flat glass plate. With the advance of polymer technology, today's standard plastic dish for 2D cell culture, commonly known as the Petri dish, was invented by Julius Richard Petri, a German bacteriologist, who is generally credited with inventing the Petri dish while working as assistant to Robert Koch.

Cell culture is a fundamental component of tissue culture and tissue engineering, as it establishes the basics of growing and maintaining cells ex vivo. The major application of human cell culture is in stem cell industry, where mesenchymal stem cells can be cultured and cryopreserved for future use.

Vaccines for polio, measles, mumps, rubella, and chickenpox are currently made in cell cultures. Due to the H5N1 pandemic threat, research into using cell culture for influenza vaccines is being funded by the United States government. Novel ideas in the field include recombinant DNA-based vaccines, such as one made using human adenovirus (a common cold virus) as a vector,[13][14] and novel adjuvants.[15]

Plant cell cultures are typically grown as cell suspension cultures in a liquid medium or as callus cultures on a solid medium. The culturing of undifferentiated plant cells and calli requires the proper balance of the plant growth hormones auxin and cytokinin.

For bacteria and yeasts, small quantities of cells are usually grown on a solid support that contains nutrients embedded in it, usually a gel such as agar, while large-scale cultures are grown with the cells suspended in a nutrient broth.

The culture of viruses requires the culture of cells of mammalian, plant, fungal or bacterial origin as hosts for the growth and replication of the virus. Whole wild type viruses, recombinant viruses or viral products may be generated in cell types other than their natural hosts under the right conditions. Depending on the species of the virus, infection and viral replication may result in host cell lysis and formation of a viral plaque.