Chlorocebus is a genus of medium-sized primates from the family of Old World monkeys. There are six species currently recognized, although some classify them all as a single species with numerous subspecies. Either way, they make up the entirety of the genus Chlorocebus.

Confusingly, the terms "vervet monkey" and "green monkey" are sometimes used to refer to the whole genus Chlorocebus, even though they also refer more precisely to species Chlorocebus pygerythrus and Chlorocebus sabaeus, respectively, neither of which is the type species for Chlorocebus. This article uses the term Chlorocebus consistently for the genus and the common names only for the species.

The native range of these monkeys is sub-Saharan Africa from Senegal and Ethiopia south to South Africa. However, in previous centuries, a number of them were taken as pets by slavers, and were transported across the Atlantic Ocean to the Caribbean islands, along with the enslaved Africans. The monkeys subsequently escaped or were released and became naturalized. The descendents of those populations are found on the West Indian islands of Barbados, Saint Kitts, Nevis, Anguilla, and Saint Maarten. A colony also exists in Broward County, Florida.[2] 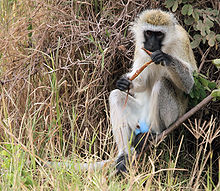 Unlike the closely related guenons, Chlorocebus species are not primarily forest dwellers. Rather, they are semiarboreal and semiterrestrial, spending most of the day on the ground feeding and then sleeping at night in the trees.[3] However, they must drink each day and are dependent on water, so they are never far from rivers or lakes.[3] Like most other Old World monkeys, they have cheek pouches for storing food. They are diurnal, and are particularly active in the early morning and in the later afternoon or early evening.[3]

Chlorocebus monkeys live in multiple male/multiple female groups, which can be as large as 76 individuals.[3] The group hierarchy plays an important role: dominant males and females are given priority in the search for food, and are groomed by subordinate members of the group. They exhibit female philopatry, a social system whereby the females remain in the same home range where they were born, and males leave once sexually mature.[3] These monkeys are territorial animals, and a group can occupy an area of approximately .06 to 1.78 square kilometres (0.023 to 0.69 sq mi).[4] They use a wide variety of vocalizations.[3] They can with warn off members of other groups from their territory, and they can also warn members of their own troop of dangers from predators, using different calls for different predators.[3] Monkeys scream when they are disciplined by members of the troop. Facial expressions and body posturing serve as additional communication tools.[3] Their social interactions are highly complex. Where alliances can be formed for benefit, deception is sometimes used. Physical affection is important between family members. 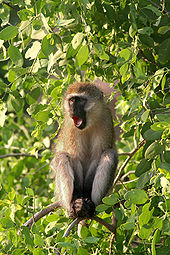 Chlorocebus monkeys are, along with chimpanzees and baboons, the most omnivorous of the primates.[3] They will eat leaves, gum, seeds, nuts, grasses, fungi, fruit, berries, flowers, buds, shoots, invertebrates, bird eggs, birds, lizards, rodents, and other vertebrate prey.[3] Their preferred foods are fruit and flowers, a seasonal resource that is varied to cope with changes in food availability.[3] On the island of Saint Kitts, they will commonly steal brightly coloured alcoholic drinks left behind by tourists on the beach.[5] Many tourists have also found out these monkeys will deliver a powerful bite if they are cornered or threatened. In Africa, the documented attacks by these monkeys are extremely rare as compared with dog attacks, in spite of living very closely with humans and often being threatened by humans and their dogs.

To signal mating readiness, the female presents her vulva to the male. Since groups are made of several more females than males, each male mates with several females. Generally, the male will display a striking, light-blue scrotal pouch, most prevalent during the mating season. Males do not take part in raising the young, but other females of the group (the "aunties") share the burden. The dominance hierarchy also comes into play, as the offspring of the more dominant group members get preferential treatment. The gestation time is about 163–165 days,[3] and births are typically of a single young. The births usually happen at the beginning of the rainy season, when there is sufficient food available. The young are weaned at about six months of age and are fully mature in four to five years. The life expectancy of the green monkeys is 11–13 years in captivity,[3] and about 10–12 years in the wild.

In the Caribbean islands, interactions between humans and monkeys are sometimes problematic. On the island of Barbados, farmers complain about the monkeys damaging their crops, and many try to find ways to keep them at bay. On Halloween of 2006, a monkey was suspected of causing an island-wide eight-hour blackout. The monkey apparently climbed a light pole and tripped an 11,000- and 24,000-volt powerline early that morning.

In Africa, many monkeys are killed by powerlines, dogs, vehicles, shooting, poisoning, and hunting, both as a food source and as a source of traditional medicines. Added to this, there is an increase in desertification, and loss of habitat due to agriculture and urbanisation. As a result, the population numbers in troops are declining in urban areas to an average of between 15 and 25 individuals, with many troops disappearing altogether.[6][7][8][9]

Use in scientific research and vaccine production

The African green monkey has been the focus of much scientific research since the 1950s, and cell lines derived from its tissues are still used today to produce vaccines for polio[10] and smallpox.[citation needed] Chlorocebus species are also important in studying high blood pressure and AIDS. Unlike most other nonhuman primates, they naturally develop high blood pressure and simian immunodeficiency virus (SIV), the ancestor of human immunodeficiency virus (HIV), both of which are widespread throughout wild populations [11][12]

Vero cells are a continuous cell line derived from epithelial cells of the African green monkey kidney, and are widely used for research in immunology and infectious disease. Similar cell lines include buffalo green monkey kidney (BGMK) and BS-C-1.[13]

The classification of the Chlorocebus monkeys is undergoing change. They were previously lumped together with the medium-sized arboreal African monkeys of the Cercopithecus genus, the guenons, where they were classified as a single species, Cercopithecus aethiops. More species[citation needed] and subspecies are expected to be identified as scientists study this genus further.